When the Zapotec weaver Gaspar Chavez drove more than 1000 kilometers from Teotitlan del Valle in Oaxca to return to the Ajijic area he had an unpleasant surprise. He set up his handwoven wool rugs hanging on ropes between trees in the grass area bordering the highway in front of El Torito market in La Floresta.

He had done this before Christmas and it was profitable enough to warrant a second trip. In a couple of days the management of El Torito told him to move; he was blocking the sign from the street. In December they had not objected to his presence, along with the man who washes cars. So he and his two friends moved in front of the auditorium and after being there for a day, they were told by members of the artisans store near the auditorium to move again a block west.

The following day when I went to look for them they were gone.

I asked around for them. “Too bad,” said the man who sells bags of nuts, “they won’t let them work.” They had packed up and gone home, a trip of more than 1000 kilometers over roads badly damaged by the floods of this past December.

Many artists consider Zapotecs to be among the best weavers in Mexico, a tradition which goes back for centuries. Gaspar’s mother spins the wool into yarn and gathers herbs and the cochineal insects for the natural dyes used in these rugs. Red and various shades of tan are made from these insects which are found in Oaxaca.

Red was a color favored by nobility in pre-Conquest times and it was so expensive that only the wealthy could afford it. Cochineal insects are gathered in the winter and dried and stored until needed. An amazing array of dyes are made from flowers, leaves, mosses and minerals, and made color fast using a special rinse or mordant. Gaspar learned the craft from his father who learned from his father.

Designs in the rugs include the stepped fret or ladder, Mayan figures and other motifs found in the ruins at Mitla and Monte Alban. Rectangles with a square in the center represent god’s eyes. Zapotecos believe that the souls of their ancestors live in Monte Alban; hence the development of god’s eyes, a theme copied by many Mexican indigenous groups.

It is Gaspar’s desire to re-kindle enthsiasm among the young weavers for these traditional designs. He exports rugs to various locations in the United States, including Boulder Colorado where there is a big demand for copies of geometric Navajo designs. In the selection of rugs he had before Christmas there was one with fish modeled after a Picasso painting. “This isn’t right,” he said. But it sells.” 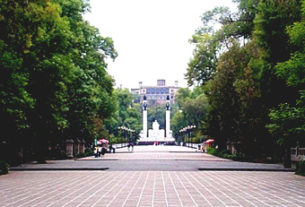