Snowbirds are landing in our exciting little corner of Mexico. Merchants say none too soon.

We, the Wests, enjoy Christmas at Thanksgiving with our extended family in Tennessee. When the last guest goes home, we follow them out the door, in the general direction of Jocotepec, at the west end (naturally) of Lake Chapala, in the colorful state of Jalisco.

We stopped flying years ago and use the relaxed four-day drive, 1442 miles more or less, as personal time — almost no phone calls or e-mails or even TV news. So far, we have avoided major catastrophe.

Hours are not wasted. We see and hear interesting things. This time, Sarah made notes, starting at the Columbia Solidarity Bridge, not far from Laredo, off to the side from Texas Farm to Market Road 1472.

The next West book is guaranteed to repeat some of this stuff.

On the Mexico side of the border, immigration was a snap. We had our passports. Visa fee and car registration were more complicated. The one banker was too busy smiling on the phone to take our money.

While we and others waited, a bright, young woman from Indiana initiated a conversation. She warned us about a nearby police shakedown along the connector to highway 85 to Monterrey. Sarah responded.

“We are on a first-name basis.”

Two guys tried a little-league trick two years ago. They pulled us over and showed us a hand-held radar gun 87 kph in a 40 zone. Pay here or follow us to Nueva Laredo to see the judge.

Sorry Charley, that wasn’t us. If you had caught us with radar, our radar detector would have caught you. We showed him the flashing lights and invited him to listen to the beep-beep-beep.

This was a new experience for Carlos. He had never heard this defense. He thought it over and told us to go on our way, but drive carefully. I asked why he did what he was trying to do, the mordida thing. He said “You won, don’t waste my time. It will soon be Christmas.”

I told the woman from Indiana that the story had appeared in Mexconnect. She laughed.

“Word is getting around.”

We invested 1,047 good Mexican pesos to fill up our GMC Envoy.

We saw the leftovers of a big truck wreck. A downhill 18-wheel flatbed had crashed through the concrete median barrier and took out an unsuspecting uphill truck. Fragments covered a sizable area. There were many “helpers” but nobody was doing anything.

It was much the same at several major highway construction projects — a million orange cones taking away one lane, heavy equipment all around, even a couple of wheelbarrows, lots of men doing meditation but nobody building a road.

Highlight of the journey was a missed exit near Saltillo. We got a little bit lost. I flashed my headlights at a federal police car and pulled him over. Two sharp young men emerged but wouldn’t talk until they got their caps out of the back seat.

When properly attired, one asked in English how they could help.

I explained one of the plights of older age, that we had been this way many times but, for some reason, we weren’t where we wanted to be, on the road to Matehuala.

One officer pointed out a place to turn around and said we should go back the way we had come. He charted the course, go here and there, to reach the correct junction, then follow the signs.

Maybe my expression caused them to rethink the dilemma. The officers looked at each other and one said we should follow them.

“Try to keep up,” the other said with a big grin.

We received a blue-light escort.

Those two federales could have parted the Red Sea but they were careful not to put anybody at risk. There was some residual value. Motorists slowed to near the posted speed limit. Some looked in awe or curiosity and must have wondered who goes there, an aging rock star or the governor.

Finally, the police pointed to one final turn and waved goodbye. I flashed ’em down again.

“This is a bad time to be a police officer,” said I.

“Your mission is almost impossible. You are painted with a broad brush. One bad egg spoils the reputation of an entire dozen.”

“I am going to thank you for helping us find our way. I know a man who has a relative serving in the presidential cabinet. Soon and very soon, your names will be on the desk of Enrique Peña Nieto, along with a note about your kindness to strangers and how well you represented your country and your profession.”

Rafael and A.G., modesty showing, said something about not going to a lot of trouble but thank you for the kind words and it was nice meeting you.

You could see “Wow, El Presidente” on their faces.

There are some bad cops. Beware. There are some very pleasant federal police officers. Because of two, we made our next stop very near our appointed time.

The SUV was loaded halfway up the side windows with winter clothes, beach clothes, cameras, computers, Maxwell House coffee and Christmas toys. We have a warning system but night security is a concern.

We saw three army convoys and met one soldier at a single-file inspection. There were two federal police blockades, one with an officer standing in the highway, stopping the occasional motorist for questioning.

We saw pickups pulling other pickups, all loaded with stuff covered with tarps. We got a glimpse of a few cars in a hurry, turning toll roads into racetracks. Would you believe 110?

There are several rules of the Mexican road: Don’t drive at night. Don’t lose concentration and allow your fuel supply to go low. This is a big one. Sometimes gas stations are far apart.

We violated this rule but there in the distance was a comforting Pemex sign.

“I hope that is not a mirage,” said Sarah.

It was. The gas station was closed. So was the next one.

We made it to one fully operational with maybe two liters to spare. This time the fill-up cost was well over 1000 pesos.

Better than the police escort and gas just in time was safe arrival in our village. Two good friends and five children came out to greet us. They really like Sarah. 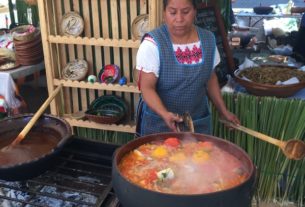