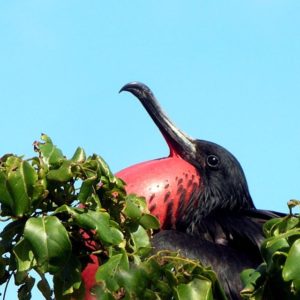 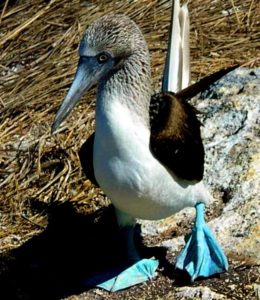 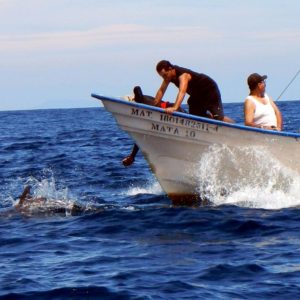 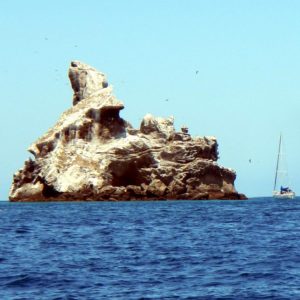 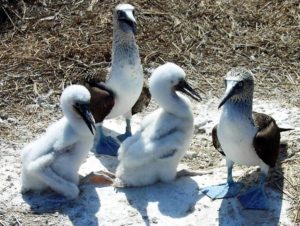 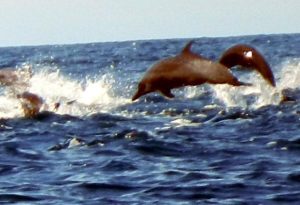 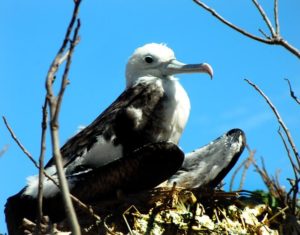 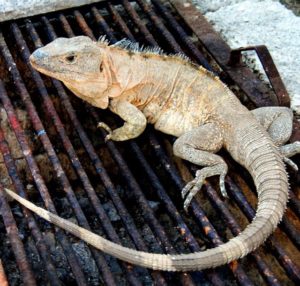 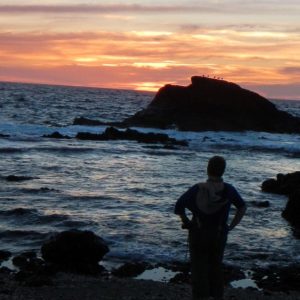 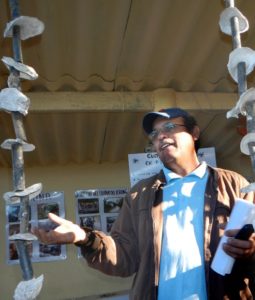 Isla Isabel is located 34 kilometers (21 miles) off Mexico’s west coast. It is a National Park and wildlife refuge with a population of some 42,000 birds and, in 2003, was named a World Heritage Site. On top of that, Isabel Island is a Ramsar site (wetlands of international importance). Because the birds and iguanas on the island have no natural enemies, human visitors can get quite close to them, for which reason the island is sometimes called The Galapagos of Mexico.

You can take a boat to Isla Isabel either from San Blas or from Boca de Camichín, both in the state of Nayarit. Although Camichín is well off the beaten track, it’s said to be a short 90-minute boat ride from the island, while the trip from San Blas supposedly takes twice as long. We opted for the short route, and decided to spend a night in tiny Santiago Ixcuintla. Whereas the hotel was notable only for its fine selection of mosquitoes, our stroll around the town was rewarded twice. First, when we discovered a remarkable (and somewhat daring) bandstand in the main plaza and secondly when we stumbled upon two very long and elaborate murals decorating one of Ixcuintla’s main streets.

The next morning we drove to nearby Boca de Camichín where we arrived at 7:00 a.m., ready for adventure.

Our guide and captain, Julio Mata, started things off with a short introduction to the number one local industry of Camichín: oyster farming. “The system we use,” said Julio, “was invented by the Japanese and introduced to us in 1976 as Project Pider Pesca.”

To become an oyster farmer with this ingenious approach, all you have to do is string old oyster shells — interspersed with short plastic tubes — on a two-meter length of strong cord or wire. This is then made to dangle in the waters of the estuary. At a certain time of year, sweet water flowing down from the San Pedro River is full of baby oysters, which then attach themselves to some 2000 strings of broken shells placed in the water by the enterprising people of Boca de Camichín. Salt water and sweet water alternately bathe the strings as the tide goes in and out and — ¡Mira no más! — eight months later, each string is heavy with new oysters ready to eat.

“This industry turned out to be so successful,” says Julio Mata, “that Camichín is said to be the only town in Mexico with not a single citizen working in the USA.”

After picking up a load of fresh oysters for us to eat during our island visit, we headed out of the estuary and came face to face with a great wall of water separating us from the open ocean. “The surf is ferocious today,” explained Julio. “We have to wait for exactly the right moment between two waves, when the sea is flat for an instant, and then zip out past the surf line. Don’t worry — in all the years we’ve been doing this, we have never flipped over.”

Well, tension mounted in us landlubbers as our crew tried again and again to break through the surf barrier. The procedure was as follows: After bobbling around for a while, the engine would suddenly come to life and with a jerk we would rocket straight at the wall of white water in front of us. To me it looked like we would go right into the wall and either end up in 1955 or at the bottom of Davy Jones’ Locker. Then, at the very last instant, the pilot would suddenly make a hairpin turn, just as the giant wave was crashing upon the very spot we occupied a tenth of a second before. Now we would race in the opposite direction for dear life, or, if we happened to be in the wrong position, the pilot would throw the boat into reverse and we would back away from the crashing froth. This scenario was repeated over and over for some 25 attempts until suddenly we sailed right through the wall of surf. What an adrenaline rush and what a relief to find ourselves on the other side, in relatively calm waters!

A half hour later, as if rewarding us for our patience, a gorgeous whale shark appeared next to our boat and swam around us in circles for a long time, as if welcoming us to the open sea.

Although this did not turn out to be the “short” ride I had expected, we eventually arrived at the island, which has a naturally protected harbor. A few minutes later, as we carried our gear to where we would spend the night, we discovered what is truly unique about Isabel Island: the air is always full of hundreds of birds and so are the garlic-pear (Crataeva tapia) trees which aren’t much higher than two meters. Thousands of frigate birds have built nests in these trees and, because they have no predators, you can walk right up to one of the “babies” (which are bigger than chickens) and take all the photos you like.

We deposited our sleeping bags and gear on the concrete floor of a huge unfinished building with open sides — a failed attempt to construct a restaurant. This is the only place where eco-tourists are allowed to camp on the island. It’s also the favorite haunt of dozens of iguanas which, like the frigates, showed no fear of us.

A few minutes later we were climbing a nearby hill where countless seagulls and boobies nest on the ground. These birds have a special squawk to advise intruders like us whenever they step within the boundaries of their personal space, a distance that varies from about 1.5 to 2.5 meters. This, of course, is plenty close for taking photos of the famous blue-footed booby, as well as its red, brown and green-footed cousins, which roam the island.

From the top of the hill, we could see most of the two-kilometer-long volcanic island and could make out the other members of our party happily snorkeling in pools near our campsite. The snorkelers said the coral and fish they saw were spectacular and that’s the only word I can use to describe the taste of the home-grown oysters and fish smoked over mangrove wood, which we enjoyed later that day, not to mention the spectacular sunset we witnessed in the evening.

We were surprised to learn that alcoholic beverages are strictly prohibited on the island and not at all happy with the primitive state of the toilets, but such trivialities were utterly forgotten during our return voyage. “Do you think we’ll see any dolphins on the way back?” we asked Julio. “Caray, I wish I could say yes, but around here we don’t see them very often. Sorry.”

Well, we were enjoying a calm sea and a beautiful blue sky when, suddenly, the entire horizon was filled with hundreds and hundreds of silvery shapes leaping high into the air. It was more than a school of dolphins, it was a whole university of them! We turned and drew near to them and they just kept coming. Their joyful exuberance and energy filled the air. As if that was not enough, a little while later a family of humpback whales appeared next to us and frolicked around our boat for the longest time.

This first visit to Isla Isabel gave me not just one, but several once-in-a-lifetime experiences. If you don’t mind roughing it, you’d better put this extraordinary island on your bucket list. You’ll get to see much of what the Galapagos have to offer without having to fly 3,000 kilometers further south — and the Mexicans will not charge you the US $100 entrance fee that Ecuador extracts from its visitors.