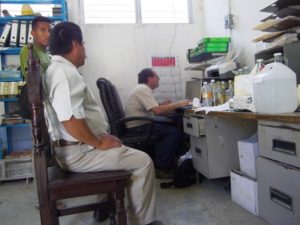 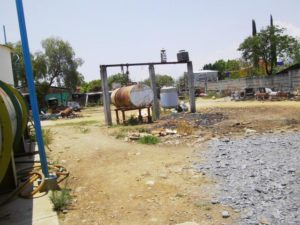 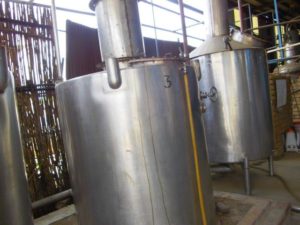 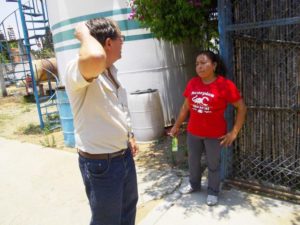 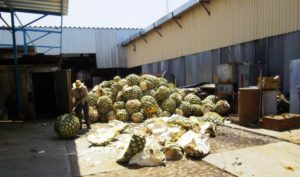 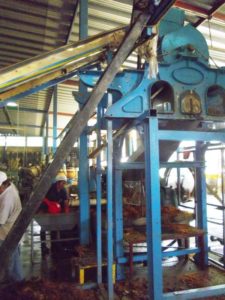 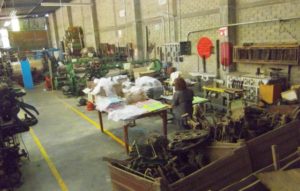 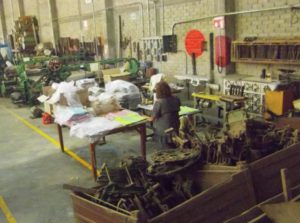 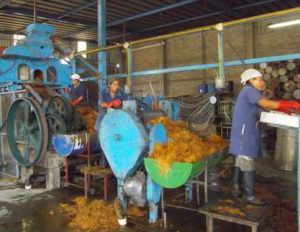 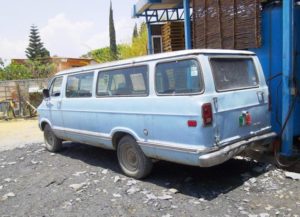 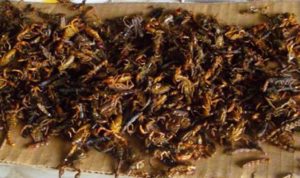 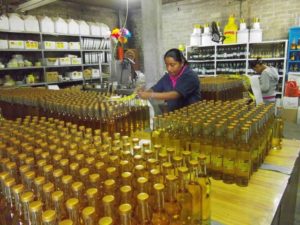 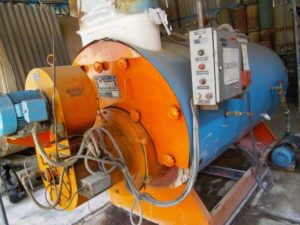 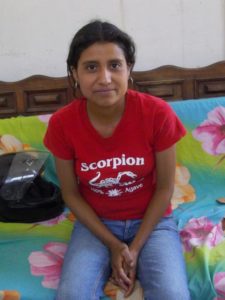 Erica is sitting in the office of her boss of eight years, Douglas French, owner of Scorpion Mezcal in San Agustín de las Juntas, Oaxaca. French has just informed her that she qualifies to become a purchaser in Infonavit, Mexico’s government-sponsored home ownership program, which provides low interest mortgages in designated housing developments. French then leaves to attend a meeting out of town. “Working for Señor Douglas, Scorpion Mezcal and Señor’s textile business has been a gift from heaven,” the twenty-four year old single mother of two quietly confides, emotion almost overcoming her.

Since 1976, French has been living in Oaxaca, the colonial city in southern Mexico known as much for its agave-based spirit mezcal (also referred to as mescal) as for its UNESCO World Heritage Site designation. The 58-year-old Señor French has been as much a part of the modern mezcal industry as anyone else, whether Mexican or foreign (i.e. American) born, active in promoting and enhancing mezcal’s international reputation, and steadfastly attempting to advance the cause of fair national regulatory standards.

But it’s French’s way of doing business which impresses more than his stature or success in the industry. He has built a significant domestic and export mezcal business quietly and without fanfare, in large part as a result of wise and calculated equipment purchasing practices, using sustainable manufacturing methods where feasible, and maintaining a loyal complement of employees — comprised of mostly women, women who have their boss to thank for an improved lot in life.

Women in the workplace at Scorpion Mezcal

In southern Mexico, much more so than in the U.S. or Canada, it appears that women tend to lag behind their male counterparts when it comes to employability, wage parity and fair conditions. Having young children and other family obligations makes it even more difficult for them to eke out a modest existence. And in the mezcal trade, while one often finds wives and daughters assisting their palenquero husbands and fathers, when it comes to day-to-day operations, when both day laborers and permanent employees are sought out, on balance it’s usually the men who get the work. Who would even consider hiring a woman, especially a single mother? After all, here in Oaxaca it’s normative to advertise for the gender of the worker you want to hire.

Douglas French has a full-time staff of 14. Eleven are women. Their tenure at the plant ranges from three to 35 years, and the worker with the loftiest seniority dates to when French was only in the textile business. While the Scorpion Mezcal premises do include a textile component, and some workers move between the two operations, mezcal is the main business. The textile business, while perhaps turning a modest profit, continues to exist more for the purpose of enabling French to maintain employment for his workers — female workers.

“I was 16 at the time. I walked by the factory and saw a sign out front, so I went in. The first week Señor Douglas told me to work crushing baked agave, then I did two different jobs with the textiles. Eventually I learned how to fill and label mezcal bottles. But more recently, I’ve been learning about silk screening so I can help with printing T shirts and other promotional products.

“I love that I am given the opportunity to keep learning. But most of all, I don’t have to take a bus or colectivo to work because it’s so close. I walk home for lunch every day to be with my kids.

“I can’t even begin to express my feelings about being in a position to move out of my parents’ home and into my own [Infonavit] townhouse condominium, also close to work; and I’m single and only 24!”

The range of responsibilities of the women at Scorpion Mezcal is remarkable. Erica appears to be a jill-of-all-trades, but the responsibility she’s been asked to assume since beginning with Scorpion Mezcal is steadily increasing. Erica’s in the middle of the employee pool. Other women are utilized at relatively unskilled functions such as working with cotton textiles, and on an assembly line processing baked agave as it proceeds through the subsequent stages of production.

However some of the women are in management roles, in charge of day-to-day operations and regularly meeting with French. Doña María has been employed by French for 17 years, and Elsa for 6 years. They are entrusted with financial and accounting matters and supervising employees, even male workers.

“I guess it’s just something I learned from mom,” surmises French when asked how he ended up with an over-representation of members of the fairer sex in an unfairly male dominated industry. Beginning in the 1970s, and continuing until her death in 2008, Roberta French championed for giving rural Oaxaca women a chance to prove themselves as reliable, skilled workers with the potential for developing their entrepreneurial skills.

She began a whole new rural cottage industry by importing cotton from Puebla to Oaxacan villages and teaching a trade and independence to women who were at the time stay-at-home-mothers and subsistence agriculturalists. By the mid 1980s, Mrs. French had trained 100 women to spin and weave and — more importantly — how to be self-sufficient, making a living from their home workshops.

Growth of Scorpion through foresight and salvage

French began learning about mezcal while employed in the now-defunct Encantado mezcal factory. Production ceased in the mid 1990s, around the time that Oaxaca’s textile industry began to writhe. “You know,” laments French, “75 percent of Mexico’s factories have closed their doors since free trade began, and the textile industry has not been immune to what’s happened.”

It was only natural for him to begin his own fábrica de mezcal. “I had all this knowledge I had gained from making and exporting mezcal for Encantado,” French continues, “so with my textile business tanking, it seemed like the logical thing to do.”

From the street, all one sees are nondescript high brick walls and steel doors. Walking onto the premises is like entering a spacious scrap yard — monstrous rusted receptacles, steel girders, stacks of wooden pallets and piles of concrete blocks. The only evidence of mezcal is a full-size vintage copper still hoisted on top of a wooden plank resting across three tall concrete pillars. “That was my first copper still,” French beams, nostalgia in his eyes.

Turn left about halfway down the property just beyond the still, and you enter the world of mezcal. Scorpion is now a far cry from the age old traditional mezcal production methods.

“But there’s no way I could have afforded to build the operation I now have if I’d bought all this equipment new and for its intended purpose,” French admits, confessing that purchasing new would have cost him at least quadruple what he actually paid.

It all begins to make sense. What at first instance appeared to be scrap awaiting the arrival of the junk man, is indeed the opposite — salvage materials French continually sources then negotiates to purchase, nuggets in the rough ready to be almost miraculously transformed into what is in fact gold for French.

The conveyor belts and blades, referred to by him as “the gauntlet,” is an elaborate piece of machinery designed by French, made from parts he purchased locally from a dealer who had acquired the metal from a sugar cane mill which had shut down in the late 19th or early 20th century. “I adapting an old carding machine to put part of the equipment together Look, it’s stamped 1883,” he says.

Soda pop processing plants in Mexico’s southern states such as Oaxaca and Chiapas have been closing as a result of changing industry strategies aimed at improving profitability through integrating smaller operations with larger ones in the north. This has created a fertile proving ground for French’s ingenuity. He has already adapted some equipment he purchased from a scrap dealer who had acquired the manufacturing equipment of a prominent soft drink brand.

The Scorpion Mezcal yard contains structural steel, tubing, tanks and steam engines — more salvage from the soda pop industry, which French is waiting to modify when the time is ripe for further expansion of operations.

“Until recently, I was running at 60 percent production capacity, and now it looks like I’ll be struggling to meet the demand with the equipment that is currently functional,” he reveals. “Published statistics indicate that Oaxaca produced 800,000 liters of mezcal in 2010, and 1.3 million liters in 2011.”

Scorpion’s recycling of metals from other industries is one dimension of French’s determination to maintain as sustainable an operation as feasible, albeit perhaps dictated by economic necessity. Nevertheless, the mere fact of his resolve in this regard sets Scorpion apart from the Benevas and Zignums in the realm of commercial mezcal production.

Like many other producers, however, French does his part to maintain a green approach to growing agave and producing mezcal. While he buys most of his maguey from other landholders, he owns about 20 hectares of land which he maintains under cultivation. Where he may differ from others is in the extent of his effort to ensure sustainability.

His agave crops are as much as 30 miles away from the factory. Yet he trucks what would otherwise be waste water from his stills, and agave fiber which has had most of its nutrients removed in preparation for fermentation, to his fields. “It takes about three years for the fiber to rot to the point where I can use it as compost, but for me the transport and effort is worth it,” he maintains.

French is constantly putting profit back into the business. His rickety old van which he drives to work on a daily basis evidences his attitude toward the accumulation of material wealth and his overall approach to commerce. He appears bent on continuing to grow Scorpion Mezcal and ride the wave of mezcal’s meteoric rise in the international community of spirits aficionados and the cocktail crowd, all the while giving more Oaxacan women increased opportunities to become productive members of his team.

And the scorpions in French’s mezcal? He buys most of them from young boys and girls in nearby villages who catch them and bring them to him — prudent business acumen combined with doing good for the Oaxacan community. During prime scorpion season, these children often earn more money than their parents. 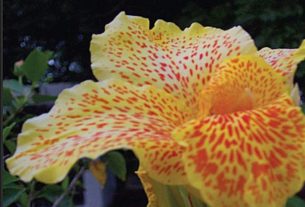