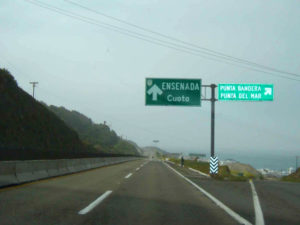 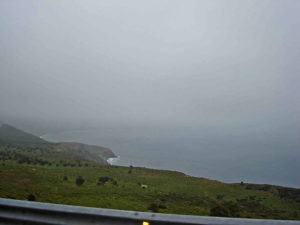 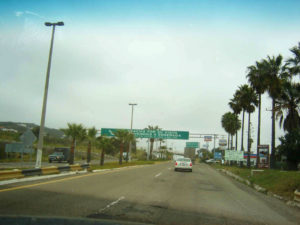 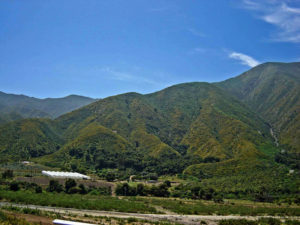 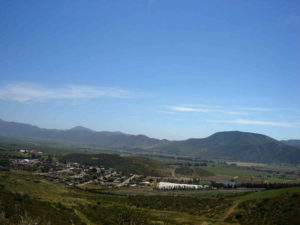 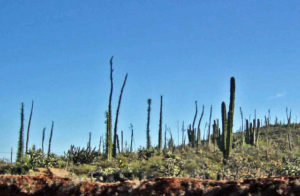 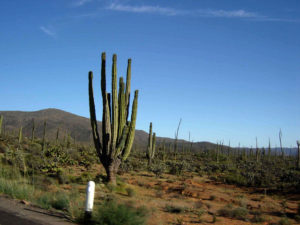 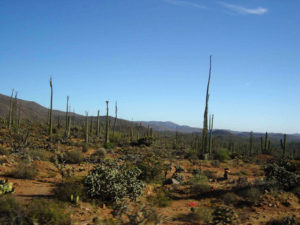 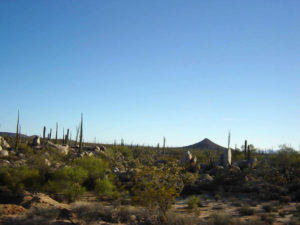 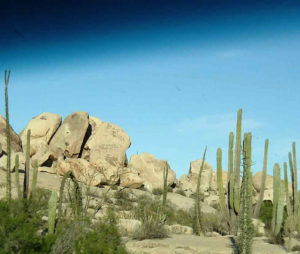 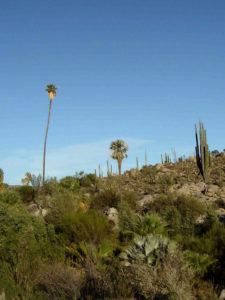 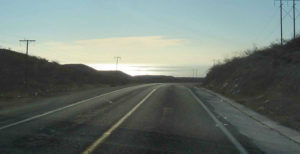 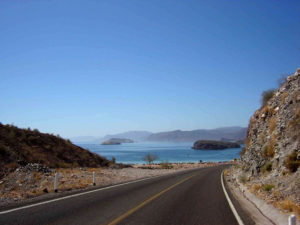 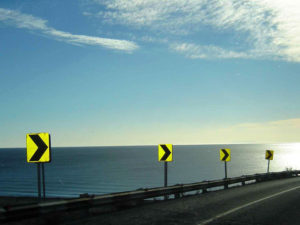 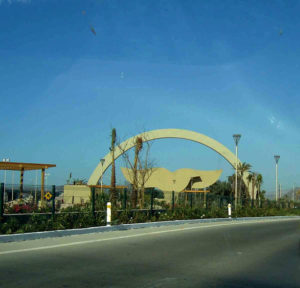 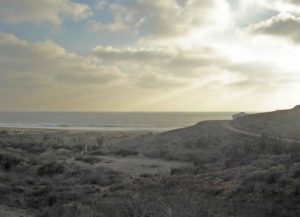 The Baja 1,000 is considered one of the most dangerous, but exciting, races in the world.

It winds through mountains and desert in the most remote parts of Baja California with drivers dodging Mother Nature’s homespun hazards like rugged dry washes and rapid changes in altitude. They also deal with free-roaming livestock, rattlesnakes and one of the largest concentrations of big, bad cacti on the planet.

You don’t have to be an off-road racer to get a taste of what the legendary race is like, however. To get a feel of what the drivers go through, instead of flying, next time you make the trip to the Los Cabos area drive Mexico Highway 1.

Driving down the Baja is an adventure you will never forget.

Leaving the United States through San Diego and entering Mexico at Tijuana is a fairly quick and painless experience for most travelers. It takes about five minutes to flash your passport and secure your tourist visa at the crossing station.

What you want to do is hop on Mexican Highway 1 and motor as quickly as possible through Tijuana and Ensenada, which are, pretty much, suburbs of San Diego. A growing number of U.S. citizens actually live across the border and commute to the San Diego area for work on a daily basis.

My wife and I recently moved from the U.S. to San Jose del Cabo, about 18 kilometers east of Cabo San Lucas. We packed all we could into the back of our Ford Explorer and headed south. Simplicity, minimalism, freedom from the trappings of day-to-day life drew us to this cozy little colonial town about 40 kilometers south of the Tropic of Cancer, where Hemingway and Steinbeck found inspiration more than 80 years ago when it was a sleepy little fishing village.

There was a lot of preparation and planning that went into our trip, but the thing is no matter how much research you do, you can never be totally prepared to drive from the United States to Land’s End.

There is an ancient beauty to this desert and mountain land that is mostly untouched by man and time. And although the highway is always challenging, it is also beautiful — a landscape of towering cacti, palm trees and giant boulders, wrapped in infinite quiet.

The flavor of Old Mexico

The impact of the journey doesn’t hit until you are a good hour down the road from Ensenada, just north of Punta Baja. That’s when you start to get the flavor of Old Mexico and make your first move towards the Sea of Cortes on the eastern side of the peninsula. The towns and villages become smaller, quainter, each with their own individual charm.

It’s then, as you slip away from the border, that you realize you are in a different country, a place that may only be a couple hundred miles from the United States, but, in many respects, light years away — as you will notice when you make your first stop for gas and a cold beverage. Instead of the huge, well-lit and crowded supermarkets in the U.S., the little village stores are often tiny and dark.

There were no packaged meats. In fact, the butcher is likely to have freshly cut meat hanging to dry near the checkout counter. There are no microwaveable foods, frozen dishes or ornate trays of veggies and snacks. You’ll see only real foods people actually cook, like rice, beans, chiles, fresh tomatoes — meat cut up, for the most part, into chunks rather than roasts or steaks, veggies and fruits that are actually tree-ripened, and eggs that came from chickens not cooped up in cages.

Travelers are warmly greeted in the little villages along Mexico Highway 1, and it is not uncommon for the proprietor of a shop or restaurant to personally extend a hand in friendship to an unfamiliar customer.

The owner of a little restaurant where we had lunch near Guayaquil, whose English was far worse than my Spanish, came to our table with a large halibut he wheeled over on a cart. It took me awhile, but I finally understood that he wasn’t trying to sell us the beautiful fish, he was, instead, sharing his joy in having such a nice catch in his restaurant.

Our entire trip covered more than 1,500 miles of rough and rugged road. The villages are far apart. Some are tiny, but they all have a little plaza for celebrations and gatherings. The homes are modest, at best, but clean and usually brightly painted.

Checkpoints for your safety

There are a lot of misconceptions about Mexico right now, a lot of negative stories in the media about drug cartels and random violence. You will have family and friends, as they learn of your plans to drive The Baja, suddenly become seriously worried about your welfare.

The Mexican government is going out of its way at this time to enhance and promote tourism. The downturn in the U.S. economy has hit The Baja hard and officials are doing what they can to promote and secure a safe, friendly environment for tourists. That’s why, during our trip, we encountered six military checkpoints, set up randomly along the highway to intercept and discourage the drug trade.

What happens at these checkpoints? Nothing you should worry about. You will be asked where you came from, where you are going. Twice we were asked to get out of our vehicle to open the back of our Explorer so they could have a look at what we were bringing with us. Usually, the first thing they saw was a fishing rod sitting on the top of the pile of our stuff, which prompted a smile as they waved us through.

Actually, the checkpoints usually came after we had driven long stretches of highway without seeing another vehicle, in quiet little places in the middle of No Man’s Land.

The first time we encountered the soldiers, I must admit, it was a bit intimidating. How often do you roll up on a roadblock in the United States where there are more than a handful of soldiers with loaded rifles greeting you?

But, after the first couple of stops, you realize these guys are there for a reason, that the Mexican government is trying to not only put a dent in the transport of narcotics but make visitors feel comfortable as well and, suddenly, you look forward to the checkpoints. In fact, at one checkpoint we stopped the vehicle and jumped out to stretch our legs. The soldiers seemed to understand and put up with us for a couple of minutes as we took a well-deserved break.

The Internet is filled with a lot of misinformation about the trip down The Baja. There are warnings of places that will rip you off, gas stations that have no fuel, unpleasant experiences.

First off, there are plenty of restaurants and plenty of gas stations and they all have fuel, whether for the body or your vehicle. You will be surprised at the hospitality and quality of the food.

Don’t let your gasoline gauge slip very far past half-empty. Even with a larger vehicle that may suck down fuel at a faster rate, you will never be more than three-fourths of a tank of gas between service stations and —at least during our trip — we found every station we stopped at to have gas, no matter what time of day or night.

The service attendants are polite and friendly. We had heard how some drivers claim that when they pull up to a tank the attendants wouldn’t roll the counter back to zero. We did not find that to be true. In fact, in several trips down here, the only difficulties we have had came when a bus driver took us for an extra $2 once and a waiter at a local bar messed up our bill badly. That’s it. The shopkeepers are keenly aware that one bad experience with a tourist can impact their business. Our change has always been accurate, the service fine, as long as you realize that things here in Mexico move a lot more slowly, and that courtesy is the rule, especially when driving.

The locals drive fast, no question. Speed limits and stop signs are, as some say, “merely suggestions.” That does not mean total mayhem and craziness on the highway.

In fact, just the opposite is true.

As you roll down Mexican Highway 1, you will notice it is a place where strangers look out for each other. We learned that early when we saw an oncoming trucker flashing his turn signal in the middle of nowhere. We were confused. There was no place for him to turn. We checked to see if our blinker was going and it wasn’t. A moment later we understood as we drove up on a large cow grazing on the side of the road. The trucker was warning us of the approaching hazard. That happened frequently.

We also learned that if you want to pass a vehicle on the highway all you have to do is signal and the driver ahead will signal back if it is safe — a left-turn flasher means it is okay, a right-hand flasher means stay put, a vehicle is coming from the other direction.

The highway is relatively well-posted with signs. Curva peligrosa is an important one to know. It means there is a dangerous curve ahead. There are signs with cattle drawn on them. These are reminders that anywhere along the way you can encounter cows, goats, burros, and horses. We also saw coyotes and rattlesnakes.

It is also easy to get engrossed in the scenery. There are places along the highway that look like a piece of the moon fell to Earth and cactus sprung from it. Others have nice, neat rows of hay with irrigation lines that look a lot like Idaho. As you work your way toward the little fishing towns of Mulege and Loreto and the metropolis of La Paz, you will enjoy spectacular views of the Sea of Cortes. The seaside towns offer nice little breaks in your drive with plenty of restaurants, gas stations and hotels. They are also very popular fishing spots, so if you are looking for a chance to break up your trip with a little fun, stay a day or two and wet a line.

From Loreto it’s a relatively, at this point, short jaunt to La Paz. If you have missed being around a lot of people, driving in heavy traffic and the sound and beat of a big city, La Paz will fix all of that. It is a thriving metropolis with heavy pedestrian traffic, myriad shops and services and the pace of a big city.

Once you make it through La Paz, the remainder of your trek down The Baja is a breeze. A wide, four-lane highway will guide you west across the peninsula to Todos Santos, a lovely little art center just around the corner from Cabo San Lucas.

The road changes just south of Todos Santos, where there is perpetual construction and detours along dirt roads with a washboard surface that will make your vehicle shake and rattle for miles as you drive along the torn up highway. When completed, it will take about a third of the time to travel from Todos Santos to Cabo San Lucas, but not now and not for the foreseeable future as crews have huge chunks of road under construction.

But, those rumbling, bumpy last miles suddenly disappear as you crest one last tall hill and look out on Land’s End at Cabo San Lucas.

Your journey is complete. You have earned the right to a night on the town and some cool refreshment because you have conquered The Baja.