…”there’s gold in them there hills, and diamonds in that there tequila”…

I know! You think I’m several sheets to the wind from too many shots of tequila already, even before you read this month’s Did You Know column. But—honestly—diamonds really can be made from tequila!

Scientists have discovered that Mexico’s national drink, when subjected to considerable heat with the resulting vapor persuaded to hit just the right surface, can be transformed into synthetic diamonds.

The feat, if that is the right word for the sacrilegious destruction of a bottle or two of Mexico’s national drink, was reported in New Scientist last month (June 18, 2008, edition). Not surprisingly, this research was not carried out in the state of Jalisco – no true Jalisciense would ever stoop so low. Apparently the residents of Monterrey don’t share this religious fervor for tequila: the innovative experiment was performed by a team of scientists led by Javier Morales of the University of Nuevo León.

Their process relied on ordinary tequila blanco (80 per cent proof), heated to produce vapor that was then injected into a low-pressure chamber. The carbon deposited on the interior surfaces of the chamber definitely had the tell-tale structure and composition of diamonds. These “diamonds” formed a thin film, rather than a huge rock suitable for mounting in your lover’s engagement ring, and the film conducts electricity. Diamond film has been made before in a similar manner from a number of other raw materials. It is tougher than silicon and used in machines designed for harsh conditions and extreme temperatures. According to the New Scientist article, it is the first time it has ever been demonstrated that diamonds can be synthesized directly from any kind of alcohol.

More research (and no doubt more tequila?) will be needed before scientists can be sure that the method is commercially viable. I’m wondering if they need any volunteers…

Tequila dates at least as far back as the sixteenth century – see an earlier column in this series.

Visions abound of well-stocked tequila bars being deliberately set on fire by mobs of entrepreneurs attempting to strike it rich. However, if the world’s most expensive tequila(225,000 dollars a bottle) is used, then the resulting diamonds will have to carry a decidedly premium price tag.

Even if the true value of this discovery is still unclear, one thing is obvious: tequila can no longer be regarded only as a man’s best friend—the diamonds it conceals presumably make it a girl’s best friend, too!

So, next time you say ¡Salud! and knock back a shot of tequila, remember – those rough edges you feel later are nothing to do with having imbibed too much tequila–they are only the unfortunate byproduct of all those carbon molecules that are eagerly awaiting their opportunity to become tiny diamonds. 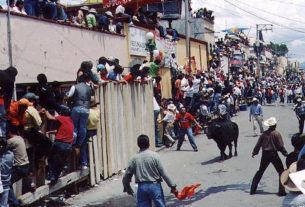 Lenten traditions in Oaxaca: Our Lady of Sorrows