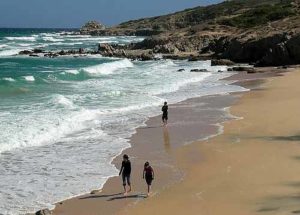 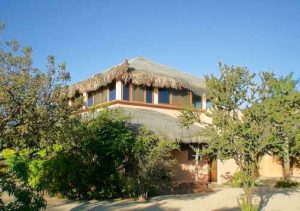 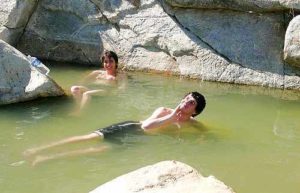 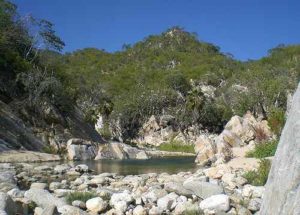 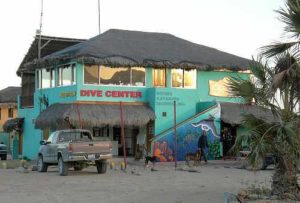 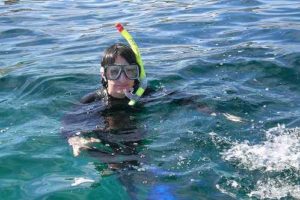 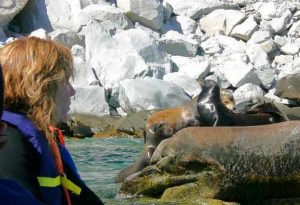 We arrive in Cabo Pulmo as the sun is setting, relieved to finally find the end of the initially paved, then dirt access road, which has been bounded by barbed wire ever since we caught our last clear views of the coast near La Ribera. At intervals behind the barbed wire are warning signs making it very clear that the land either side of the road is private. Over a beer with Kent Ryan, the owner of Baja Bungalows, our base for the next few days, I learn that the newly erected fences mark the beginning of a major development of the coast immediately outside the National Marine Park. When I eventually got a chance to examine the masterplan, I can only say that I’m glad we visited Cabo Pulmo in early 2008 before this coast is changed for ever.

Kent is a very accommodating and gracious host, who even offers to get groceries for us when he sets off for “town” (La Ribera) the next morning. We had the foresight to bring most supplies with us, and have found some staples locally (Cabo Pulmo has only a couple of tiny stores), so ask Kent if he minds looking only for some chorizo to go with our eggs and tortillas. Some excellent chorizo is waiting in our fridge when we return later in the day! We’re occupying one of two palapa-style houses at the Baja Bungalows; the 360o view from the upper story is incredible, encompassing everything from rustic buildings to the waves breaking on the shore and to the rugged virgin mountains of Sierra La Trinidad. The bungalows (solar-powered) come completely equipped and everything about them has been thoughtfully designed. Water is at a premium here, but there are enough plants around the bungalows to attract hummingbirds and fritillary butterflies, while in the background a woodpecker hammers away at a venerable cardón cactus.

The first day is too windy for snorkeling or diving, so we familiarize ourselves with Cabo Pulmo and its immediate environs. The village is tiny and to our disappointment we discover that the “tortilla lady” has gone to La Paz for a few days holiday. “Oh well… no fresh tortillas for our eggs and chorizo!”

A few kilometers to the south are the small bay of Los Arbolitos and the much larger Los Frailes bay, site of a luxury beach resort. Los Frailes proves to be a lovely beach, with only gentle waves even when the wind is really blowing. Green turtles nest on several beaches along this shore in August and September.

In the afternoon, we drive to the head of the track behind Cabo Pulmo and walk into a wide, sandy arroyo. Wild fig trees cling tenaciously to the rocky valley sides. A jackrabbit bounds across the arroyo, disturbed by our presence. Our surprise is to find that mountain bikers have made an extensive network of narrow tracks all over the hillsides: perfect walking trails and no need to worry about stepping on cactus spines.

The next day, the windy weather continues, so we drive inland to the town of Santiago and its nearby hot springs. Opting for the Santa Rita hot springs, we soon realized that the road, especially the last few kilometers beyond the San Jorge ranch, was best suited to a vehicle with high clearance and/or four wheel drive. A donation of $50 pesos a person to the local ranch owner allowed us access to the very pretty stream which was running quite swiftly even in the middle of the dry season. On the far side, a hot spring had been encouraged to fill a decent-sized pool, which looked completely natural at first glance with its large rocks and irregular edges. The water was very pleasantly warm, and it was easy to cool off when it became too hot by taking a quick dip in the cool refreshing stream flowing alongside. The area upstream of the hot springs is particularly beautiful, with ancient fig trees clinging to the rocks and canyon walls. The Palomar restaurant in Santiago is deservedly popular and prices are generally reasonable, though we were flabbergasted when charged no less than US$11 for a plate of squashed avocado (called guacamole on the menu, despite the lack of any tomatoes or salsa) and mashed beans!

Before returning to Cabo Pulmo, we drove a few kilometers south of Santiago to cross the Tropic of Cancer. The monument on Highway 1 marking the tropic (latitude 23o27’S) is alongside a roadside shrine to the Virgin of Guadalupe, but otherwise unbelievably unremarkable.

In the evening, we stroll under a brilliantly starry sky towards Tito’s restaurant. With no street lights and only limited solar power, Cabo Pulmo is a perfect star-gazing location, but walking anywhere at night requires a flashlight.

There are various restaurants in Cabo Pulmo, all of them relatively expensive for what’s on offer. At Tito’s, we enjoyed the seafood enchiladas while our daughter was offered the choice of quesadillas or vegetarian enchiladas. To avoid disappointment, check the opening times (and opening days!) for restaurants once you arrive at Cabo Pulmo. Service everywhere is quite slow; expect to pay between US$16 and US$24 for a main course.

The clear skies have brought a welcome change of weather. Overnight, the wind has finally calmed down and we wake to a placid ocean.

A snorkeling trip is hastily arranged with one of the local dive operators. Cabo Pulmo has several competing dive shops, with similar priced offerings and confusingly similar names. Snorkeling tours run from $35US to $80US; a guided dive (2 tanks) for certified divers is about $130US.

José the boatman fits us with wetsuits, masks, flippers and snorkels, and then shows us three distinct sites. Our companions include Mike from Denver, whose 300-pound frame acts as ballast, and two girls visiting just for the day from Cabo San Lucas.

Jacques Costeau, the famous ocean explorer, once described the Sea of Cortés as being the “aquarium of the world.” Our snorkeling expedition provides an instant insight into why this area has been protected since 1995 and is now designated a National Marine Park. Cabo Pulmo is on the Tropic of Cancer, about as far north as coral can possibly grow. The water temperatures vary though the year from about 20o to 30oC (68o to 86oF). The seven fingers of coral off Cabo Pulmo comprise the most northerly living reef in the eastern Pacific. The 25,000-year-old reef is the refuge for more than 220 kinds of fish, including numerous colorful tropical species. Divers and snorkelers regularly report seeing cabrila, grouper, jacks, dorado, wahoo, sergeant majors, angelfish, putterfish and grunts, some of them in large schools. One regular visitor told me that he had been mesmerized when diving one summer on encountering hundreds of graceful baby manta rays blanketing the ocean floor.

The protected area, ideal for diving, kayaking and snorkeling, covers 71 sq. km of ocean with its highly complex marine ecosystem. Hopefully the authorities responsible for the marine park will ensure that it will still be an equally wondrous place in 25,000 years time. The dive sites include underwater caves and shipwrecks.

One of the snorkeling stops is at the Frailes Rock sea lion colony, where several rock platforms lie just beneath the waves. The day we visit, the sea lions are having an argument. One sea lion plonks itself down across another, pinning it to the rock, while an angry bull lion barks out orders, before chasing a rival back into the ocean. The cubs, which look more like cuddly toys than baby sea lions, watch, listen and (presumably) learn.

By late afternoon, the wind is picking up again, and the waves are already growing in height. As the evening progresses, the noise of the wind increases, alternatively roaring and growling, as it whips the waves up into a fury.

That night we listen to the leaves dancing across the patio. The winds have returned, with a vengeance, to blow us back to La Paz and… civilization?

Well appointed and fully equipped bungalows (and two houses) and friendly management make them the number one choice in Cabo Pulmo, but bear in mind that they are often fully booked months in advance. The most expensive house (sleeps 6-8 easily) rents for about US$130 a night in the high season.

To Hire a Car:

All major hire firms have representatives at the La Paz airport. We found that www.carhiremexico.com offered us a reasonable price and was easy to understand. There were no hidden extras topping up the original on-line quote and nor were there any surprises with the car, a Nissan Sentra from Europcar. 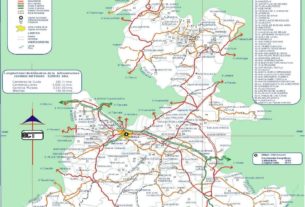