(To Part One: Loreto and San Javier) 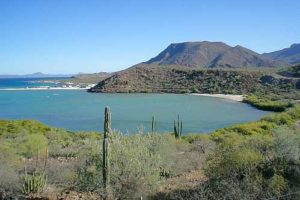 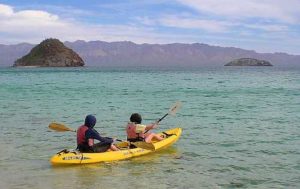 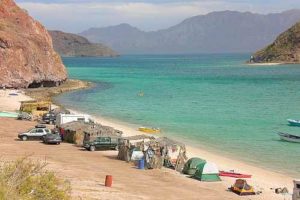 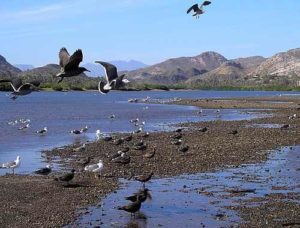 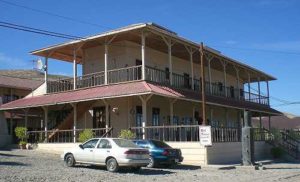 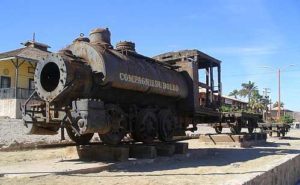 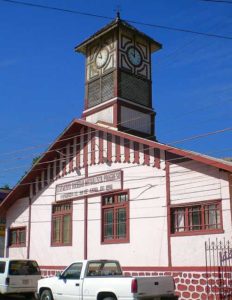 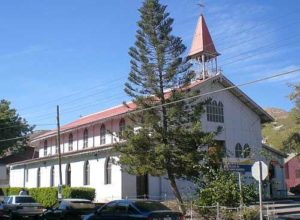 North of Loreto, the highway leaves the coast until about half way to Mulegé, at which point the Bahía de Concepción (Conception Bay) suddenly comes into view. This next stretch of coastline is among the most attractive in all Baja. As the highway winds along the coast, a succession of protected bays, small coves, sandy beaches and sandbars, with occasional mangroves, are revealed, always with a backdrop of islands and mountains. Many of these locations are used as no-service winter campgrounds by avid RVers. Conception Bay is a wonderful base for kayaking and kayaks can be rented at several locations, including the well-protected bay of Playa Santispac and at Playa Escondida.

Because of its proximity to Conception Bay and excellent sport fishing, Mulegé has undergone a growth spurt in recent years. The original mission (known as the Misión de Santa Rosalía, despite being in Mulegé) is some distance out of town, on the south bank of the sluggish Mulegé river which masks its propensity to flood as it meanders innocently through dense palm groves. The mission is worth a quick visit, but is nowhere near as interesting as its counterparts in Loreto or San Javier.

While Mulegé offers a full range of tourist services, it is not a particularly attractive town architecturally, with its eclectic mix of old and new, haphazardly arranged and much of it looking in desperate need of some tender loving care. The unusually-named Yee supermarket, highly visible from the higher parts of town, provides a clear indication of the importance of Chinese immigrants to this region’s former success as a mining center.

The area by the lighthouse, a short distance east of the town, near where the Mulegé river lazily reaches the sea is a prime birding location where it is fun to watch the pelicans, gulls and other shore birds compete for river-bourne morsels.

There are several reasonable hotels in Mulegé. Sadly, we were somewhat disappointed by the long-famous Serenidad, which has its own airstrip and is a few minutes from town. Service was friendly, but it looked like it had seen better days, and the restaurant did not even pretend to have fresh orange juice for breakfast! Better food by far can be found in the center of Mulegé, either at the popular Los Equipales restaurant, or at the lively Las Casitas, where a log fire takes the edge off the cool winter air. Las Casitas occupies the birthplace of renowned poet and orator José Alan Gorosave (1920-1976), in whose honor the local cultural center and a school are named. An ancestor, born in Spain, was one of the first copper mining entrepreneurs in the Santa Rosalía area.

If, like Erle Stanley Gardner (the creator of Perry Mason), you are an aficionado of rock art, then you should be aware that visiting any of the better sites requires obtaining a permit in advance from the INAH office in either San Ignacio or La Paz. Mid-way between Mulegé and Santa Rosalía, is a side road leading to the cave paintings of San Borjita, one of several cave painting sites in the Sierra de Guadalupe. The region’s most famous cave painting sites, declared a UNESCO world heritage site in 1993, are those in the Sierra de San Francisco, slightly further north, and inland from San Ignacio.

As we explored Santa Rosalía, it quickly established itself as one of my favorite places in Baja. Its fortunes have changed more than most towns in the course of history. Originally founded in 1705, the town failed to prosper as its populace faced repeated epidemics, and its farmland was subject to a disastrous flood. The town was largely abandoned by 1828.

A chance find of copper-bearing ore in the middle of the century reversed Santa Rosalía’s fate, and in 1885, a new lease of life was provided when the El Boleo mining company, backed by French capital, was granted a 99-year concession by President Díaz to begin mining for copper in exchange for building all the necessary infrastructure: port, town, mines, railway and foundry. It was judicious timing given that the world market for copper was taking off at precisely that time due to the rising demand for the metal from the fledgling electric companies in Europe and the U.S.A.

Virtually all the materials necessary for the construction and exploitation of the mines and for building the houses and public buildings had to be imported, primarily from the U.S.A. There was a clear geographic segregation. Workers’ homes were built on the lowland near the foundry and port. Higher up the slope was the Mexican quarter where government workers and ancillary support staff lived, and the highest section of town, overlooking everything, was the French quarter.

The contrasts of Santa Rosalía at this time were well summed by María Eugenia B. de Novelo: “Santa Rosalía was a place of clashing contrasts and situations. It had a scarred backdrop of copper hills, a black-tinted shore, French silks, fine perfumes, crystal, Bordeaux wines and Duret cooking oil, sharing the scene with flour tortillas, giant lobsters, abalone and chimney dust.” The French quarter has retained its distinctive architecture to the present day. At one end is the Hotel Francés, opened in 1886, which has an incredibly stylish period interior and still operates today. The gorgeous architecture of many of the homes of the French quarter is reminiscent of New Orleans. Beautiful wooden houses stand aloof on blocks with porches, balconies and verandahs, competing for the best view over the town below. Wooden homes are decidedly unusual in this part of Mexico, which was never forested, and are, indeed, rare almost everywhere in the country. There are so many wooden homes here that Santa Rosalía has long had its own fire department, just in case! At the other end of the French quarter are the former mining offices, now the Museo Boléo, an interesting museum where interior details are little changed from a century ago. Standing in the main hall, it is possible to imagine the hustle and bustle of former days, as clerks work feverishly to keep up with their superiors’ numerous demands.

Within a decade, the mining company had become responsible for more than 80% of Mexico’s exports of copper ingots. The local ore was rich, with up to 25% copper in some samples. Workers flocked in from far afield. Three thousand Chinese workers arrived, settling the districts still known as La Chinita and Nuevo Pekin. Working conditions were little better than slavery. The health conditions for the miners and foundry workers were dreadful. For example, 1400 deaths were recorded between 1901 and 1903. The company decided on an unusual solution. Rather than move the workers’ homes, it decided to move the smelter chimney. The new chimney was built a kilometer out of town, connected to the smelter by a large, ground-hugging flue. It can still be seen today, climbing the hillside immediately behind the Hotel Francés.

By 1900, Santa Rosalía had become a major world copper producer. The smelter relied on supplies of coking coal from Europe, principally from South Wales and Germany. The ships took from 120 to 200 days to reach Santa Rosalía from their home ports. Square-rigged vessels, flying the British or German flag, were constantly arriving in the harbor. When the First World War broke out, several German ships were unable to return to Europe and spent the next few years anchored offshore. The sailors were shocked when they heard that Germany had lost the war; their vessels were eventually distributed among the victors.

The copper deposits were eventually exhausted. The El Boleo mining company closed in 1954, but the state-run Compañía Minera Santa Rosalía continued to mine until 1985, when the smelter was finally shut down, on the eve of the town’s 100th anniversary.

The most conspicuous landmark in the main part of town remains the former foundry, now abandoned and closed to the public. The next most conspicuous landmark is the church of Santa Bárbara. There are serious doubts as to who designed this unusual church, assembled out of pre-fabricated, stamped steel sheets or plates. Most guidebooks attribute the church to Gustave Eiffel, the famous French architect responsible for the Eiffel Tower in Paris. According to this version, Eiffel’s design won a prize at the 1889 Universal Exposition of Paris, France, and was originally destined for somewhere in Africa. It was later discovered in Belgium by an official of the Boleo mining company, who purchased it and brought it back to Santa Rosalía in 1897.

The latter part of the story may be correct, but research by Angela Gardner strongly suggests that the original designer was probably not Eiffel but is far more likely to have been a Brazilian, Bibiano Duclos, who graduated from the same academy as Eiffel in Paris. Duclos took out a patent on pre-fabricated buildings, whereas there is no evidence that Eiffel ever designed a pre-fabricated building of any kind. Whoever designed it, it is certainly a unique design in the context of Mexico, and well worth seeing.

Other well-preserved buildings dating back to the heyday of the town’s success include the municipal palace or town hall (formerly a school designed by Gustave Eiffel), the Central Hotel, the DIF building, the Club Mutualista, the Post Office and the Mahatma Gandhi library, currently being restored. The library is in Parque Morelos, which is also the last resting place for a Baldwin locomotive dating back to 1886.

Across the street from the library is an excellent restaurant, Terco’s Pollito, which has friendly service, an extensive menu of Mexican dishes, fish and seafood, as well as chicken, and is very good value.

For a snack as you walk around town, it’s worth trying the French pastries (and Mexican sweet breads) from the Panadería El Boleo on the main street. With slight hyperbole, Panadería El Boleo boasts on its wall of being the World’s most famous bakery. Expect to queue, but enjoy the smells of fresh baked goods while you wait.

The collapse of the copper mining industry may have caused Santa Rosalía to slip back temporarily into a somnolent slump, but it is now recovering. The mining boom of a hundred and twenty years ago has been replaced by a boom in nature and adventure tourism, which take advantage of the town’s proximity to Conception Bay and the islands in the Sea of Cortés. Having preserved so much of its past, Santa Rosalía has a massive advantage over its competitors in that its initial revival fueled by ecotourism can be amplified by cultural or heritage tourism. This beautiful old town and its inhabitants have plenty of reasons to be optimistic as they face up to the challenges of the twenty-first century. 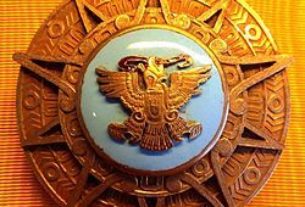 Day of the Dead, a Mexican tradition in Santiago Pinotepa Nacional, Oaxaca – gallery