Juan Mata Ortíz is a small village of potters, farmers and cowboys in Northern Chihuahua. About 30 years ago, an unschooled artistic genius, Juan Quezada, taught himself how to make  ollas, earthenware jars, by a method used hundreds of years ago by the prehistoric inhabitants. Now, his works are known worldwide and over 300 men, women and children in the village of less than 2000 make decorative wares. Much of the polychrome and blackware is feather light and exquisitely painted.

“Are you a mother?” The little girl with Bambi eyes looked up at the tall blonde Gringa and repeated the question. ” Usted es madre?” The American smiled, nodded her head and accepted the small bouquet of flowers thrust at her by the child. It was May 10th, Mother’s Day in Mexico, a national holiday of sorts that rivals the more official 16th of September in importance. The day is set aside to honor those considered most important in Mexican culture. Unlike the United States and Canada, Mexicans don’t arrange the celebration around a convenient Sunday. In Mexico, business and normal everyday life can pause whenever necessary.

Mother’s Day may fall on a Sunday, a Wednesday, a Thursday in Mexico it doesn’t matter. But, it does come around every May 10th.

The celebrations actually begin on the night before. Late, on the night before. Around midnight, the men sally forth on foot, horseback or now in Mata Ortíz, more often in pickup trucks. The vehicle s flatbed is jammed with three essential ingredients: men in cowboy boots and sombreros, cases of cold beer and loudspeakers set at a deep bass. Platoons of trucks rattle slowly down the streets, stopping at any home that holds a mother – virtually every house in the village. Tapes by Los Tigres del Norte and other ranchero or norteño bands blare while the men and boys struggle to follow along. The objects of the affections are encouraged to open their windows and lean out to better appreciate the serenades. Over the course of the night, they may repeat this exercise innumerable times, until, numbed by the noise, they retreat to their beds and hope pillows over the ears will provide some protection.

As the night winds down the blurted lyrics become more confusing. I have discovered there is an exponential relationship between diminishing supplies of cervesa and increasing vocal volume and bungled babbling of songs. By dawn, everyone is exhausted: the men are hung over and the women wearily hope for an hour of peaceful bliss before the day’s work begins. Even the roosters don’t bother to crow, seemingly embarrassed to silence by the raucous humans.

Mother’s Day in Mata Ortíz is not a day of rest for las madres. Besides the regular daily activities, there are children to dress and food to prepare for the folklorico and the fiestas at home afterwards. By late afternoon, men have dragged themselves out of bed and the mothers have bathed. Everyone arrives promptly at the school plaza for the festivities and waits an hour in the hot, low-lying sun. After all, this is Mexico. 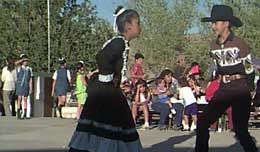 Finally, the fiesta begins: goofy skits interspersed with folkloric dances by both the elementary and junior high school kids. The women sit in the sun, watching with their youngest children and enjoying a moment of rest. The men hover at the back in the shade, or linger across the street by the pickup trucks, now replenished with Tecate and Carta Blanca. Between acts, the school director draws names of mothers out of a hat and prizes are awarded. The lucky moms step forward sheepishly, teetering on seldom worn high heels, to select from a table of wrapped gifts. (No one ever seems to choose the largest package. It is always left for the final winner).

My American friend’s name wasn’t drawn, but she already had won her prize – a small cluster of daisies from a little child who wondered if she were a mother.