In February 1519 Hernan Cortez and his small army of adventurers set sail from Cuba on one of the most epic military adventures in the history of our world. Unfortunately, the history of Mexico has since been tarnished by plunder, corruption, and greed.

The following quotes refer to Ixtacamaxtitlan at the time Cortez, his army and allies, camped there (August 28-30 1519) on their first expedition to the Aztec capital of Tenochtitlan. The quotes are from “The Conquest of Mexico”, written by William H. Prescot and published around 1843, one of the best and most comprehensive books ever written on the conquest of Mexico, with a pre-Hispanic setting.

“All along the river, on both sides of it, an unbroken line of Indian dwellings, so near as to almost touch one another, extended for three or four leagues; arguing a population much denser than at present. On a rough and rising ground stood a town, that might contain five or six thousand inhabitants, commanded by a fortress, which, with its walls and trenches, seemed to the Spaniards, quite on a level with similar works in Europe. Here the troops again halted, and met with friendly treatment.”

“The town was removed in 1601, from the top of the hill to the plain. On the original site are still visible remains of carved stones of large dimensions, attesting the elegance of the ancient fortress or palace of a cacique.”

August 1971, a small party of four tread along a rough, hilly trail through scented pines; two children, their mother and uncle Ruben. They began their journey from Ocojala, a small rancheria, where both of the children were born. The trail leads to the small, remote town of San Francisco Ixtacamaxtitlan, perhaps a six hour journey, where the children will be interned in a private Catholic school. Their father was recently killed, probably as a result of business dealings. No one seems to know for sure. Their mother will go off to Mexico City to work. Martita, age seven, is frightened and apprehensive. Vidal, her older brother, treads quietly, heavily, obviously concerned for he and his little sister.

Eventually the wooded hills give way to an open valley, denuded of it’s forests and eroded by centuries of exploitation. The small, colonial town, renamed San Francisco Ixtacamaxtitlan by the Franciscanos, lies in the curve of the river. The dome and steeples of the church of San Francisco tower above the surrounding orange-red clay tile rooftops. Across the river, nearby, steps carved in stone, rise along the steep hillside to a plateau; the pre-Hispanic site of Ixtacamaxtitlan.

Between the river and the hillside are the roofless ruins of a small stone church. Inside, the paint or whitewash has mostly pealed off the walls, revealing very distinct, reddish, intricate designs, including a repetition of the Austrian double eagle, probably a tribute to the Austrian prince Maximillian, who ruled Mexico as emperor for a short period.

Nearby, where a river once coursed, is the arch of a small stone bridge, half silted over. Elaborately carved in a dedication stone is “Carlos III, December 26, 1776, and a lot of other stuff I couldn’t decipher.

The church is now showing signs of neglect. It is large and still impressive. It was the parrocia or head church of the region. At least a dozen large paintings of religious scenes adorn the walls. They are probably six feet by eight feet in size and though they are undated and unsigned they are beautiful works of art. A few show water damage around the edges, which seems to make them even more interesting. I think they were done around the mid-40’s. The inside of the dome is painted with murals. Dozens of sculptured religious figurines meld into the décor of the multiple arched ceilings and the huge baroque style altar.

In the wall, outside the main entrance is a dedication stone, with the date of completion of the construction, 1622. 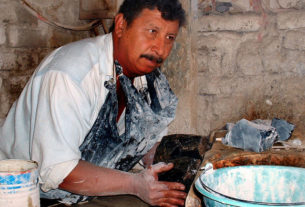 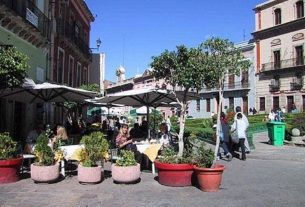