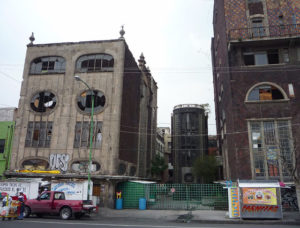 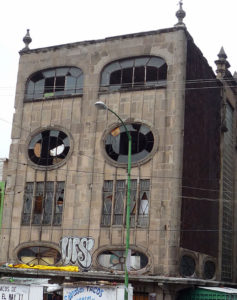 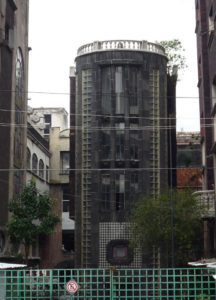 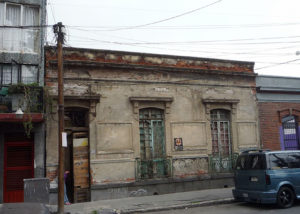 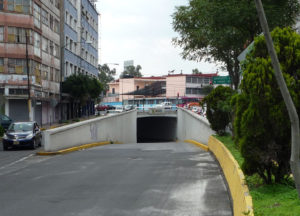 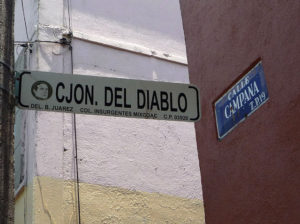 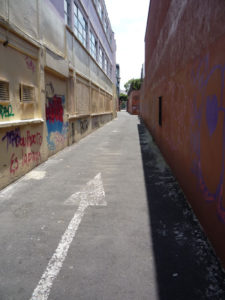 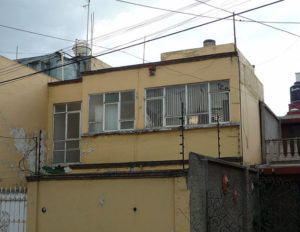 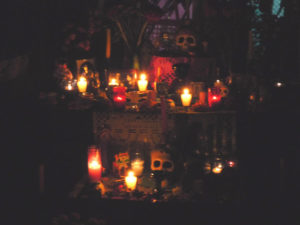 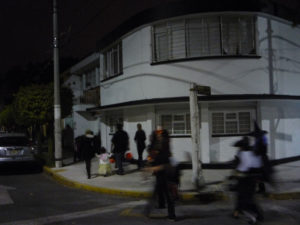 Are there ghosts in Mexico City? Built on the ruins of the grand Aztec City of Tenochtitlan, its history can be traced from the prehistoric past. Legends of murder most foul suggest ghosts abound in this ancient city with its long and troubled history.

All cities have their haunted buildings and houses — supercharged spaces that send shivers up one’s spine, for if one thing is certain it’s that such emanations are not associated with a fun time. As the British writer Algernon Blackwood put it, supernatural occurrences derive from bad things, “chiefly the evil emotions that are able to leave their photographs on surrounding scenes and objects and whoever heard of a place haunted by a noble deed, or of beautiful and lovely ghosts revisiting the glimpses of the moon?”

For some years quite a few businesses in numerous cities have capitalized on the natural human interest in the supernatural to stage ‘ghost tours’: London, Melbourne, Bath, New Orleans, Baltimore, Philadelphia… the concept has swiftly moved from a burgeoning to established industry in the age of tourism. It stands to reason that Mexico City has more than its share of angry ghosts to channel, from the ancient Aztecs and their sacrificial victims — the virgins and warriors, ball players and prisoners of war; to the specters of slavery, shades of smallpox and Inquisitional spooks. There must be Independence banshees and Revolutionary revenants, phantasms of natural disaster, daemons of murder and the wraiths of suicide. Both the Centro Histórico and Coyoacán have hosted ghost tours — but they are an ethereal memory. A brief relation is offered here of some shadowy Mexico City landmarks. 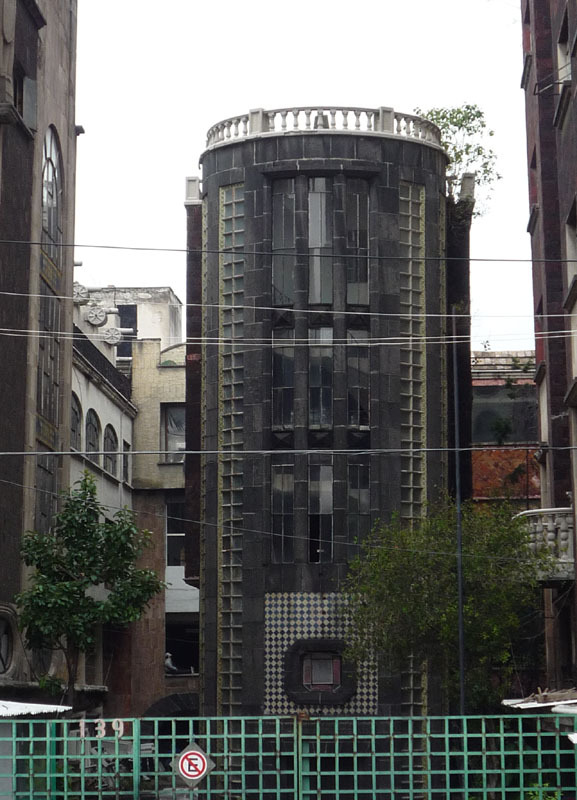 The Posada del Sol in Mexico City was designed to be a great hotel del lujo of ornate architectural splendor. © Anthony Wright, 2012

A once and future hotel of mystery and rumor, the Posada del Sol on Niños Heroes in Colonia Doctores, was planned during the mid 20th century by its Don Quixote-like creator, Fernando Saldaña Galván. It was to be a great hotel del lujo of ornate architectural splendor, a refuge for artists and intellectuals.

For some time construction kept pace with Saldaña’s vision — but not the ongoing building permits required by local authorities, nor the application of sufficient grease for their cracked palms. Months turned into years and the debts mounted. Destiny did not see fit to honor Saldaña’s blood, sweat and tears with a finished project — he was forever tilting at windmills. His life’s work, to quote Zora Neale Hurston was a ship “forever on the horizon, never out of sight, never landing” until it was finally “mocked to death by Time.”

Saldaña committed suicide, hanging himself in front of a statue of Saint Francis de Assisi, protected by a wolf. Before doing so, however, he had an inscription carved into a stone located within the premises, a part of which reads:

I recommend that the vain and the angry without
merit be appraised, who tried to humiliate me
overloaded me with difficulties, or climbed over me
to increase their own ostentation and patrimony,
while I have worked with no truce and no hope…
F.S.G. – February 22, 1945

In the years following Saldaña’s death, the building became by turns a home to the Instituto Indigenista Americano, El Consejo de Recursos Minerales and the Procuraduría General de Justicia. But it also gained a nickname — “the Bunker.” Rumors abounded that the building was haunted — as well it might, by the restless ghost of its creator. Mannequins have been hung around the place in a macabre gesture of apparent mockery. In recent times it has been used for the occasional TV series or movie, such as the evocative, unsettling Sombras del Cielo by Victor Velázquez — a short film about a crow assuming human (female) form.

Gregorio “Goyo” Cárdenas Hernández (1915-1999) was a spree killer. A spree killer differs from a serial killer in that he commits multiple murders in a short burst and then stops, rather than continue to slay victims over a long period. Goyo, otherwise known as The Tacuba Strangler, committed four murders — three young prostitutes followed by a girlfriend, through August and September of 1942.

Goyo was a strange child who exhibited cruelty to animals. His errant behavior did not prevent him from advancing scholastically, and as a youth, he received a Petróleos Mexicanos scholarship to study chemistry at the Universidad Autónoma de México (UNAM). Yet the “beast” lurked within and, at age 27, he answered its call. 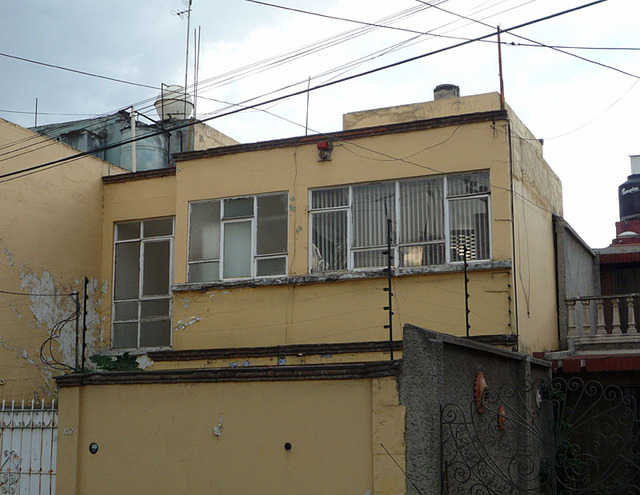 Acting on the suspicions of neighbors, police soon dug up Goyo’s backyard and exhumed the bodies.

He was arrested, found guilty, and sent to Lecumberri prison, becoming a celebrity in the process — predating the U.S. media obsession for the likes of Charles Manson and Ted Bundy.

Goyo wrote several books, married in prison (his wife bore him four children) and was eventually pardoned by President Luis Echeverría in 1976 — lauded as a wonderful example of rehabilitation. He went on to practice law.

Chilean filmmaker Alejandro Jodorowsky — not exactly a model of sanity himself — met Goyo in a cantina in Mexico City. It must have been one bizarre session: the result was the 1989 film Santa Sangre.

Today the murder house is a grim affair in a distinctly unappealing neighborhood, the proverbial stone’s throw from a frenetic Tacuba Metro station teeming with deafening traffic. Once you cross the disused train tracks the street itself takes on a quiet, vaguely ominous tone.

El Callejón del Aguacate in leafy Coyoacán is meant to harbor everything from the ghosts of former hardscrabble inhabitants to the old Accuser himself — Satan.

While the little alley seems harmless enough by day — like most ghostly locations — the preferred time to visit is late at night, if you’re game.

Occasionally, local teenagers reconstituted as prankish juvenile delinquents have been known to harass nocturnal ghost hunters. Previous tenants of the house at Cañitas 51 in Popotla were rumored to pass the time playing with a Ouija board, and anyone who has seen The Exorcist or Paranormal Activity knows (unlike the characters in those films) that fooling with the Ouija can unleash demonic forces or, at least, poltergeist phenomena — when the sheeted dead come to squeak and gibber. 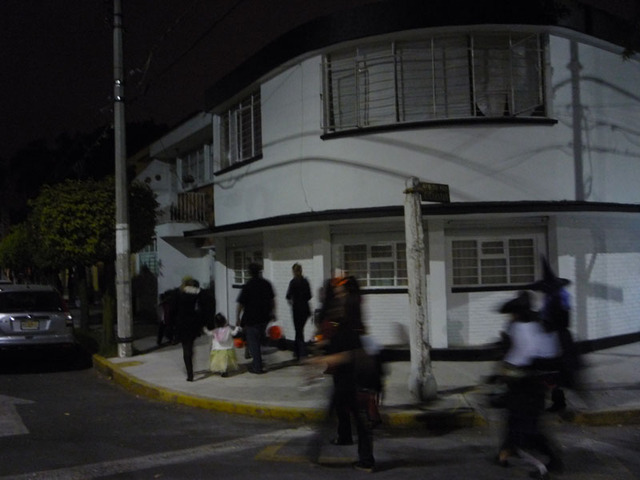 A few Mexico City residents go out for trick or treat in Mexico City. © Anthony Wright, 2012

The House of Panchita the Witch

While over at the nice end of town, the ghost of its former owner — an old lady known as Tía Toña — haunts a well-to-do abode in the Tercera Sección de Chapultepec.

A witch called Panchita lived in a pretty house with a Dutch-style façade by Plaza Río de Janeiro in Colonia Roma, but traded widely in the dark arts. The eponymous Casa de la Bruja is believed haunted. A woman’s ghost is said to be occasionally seen at midnight near the street named after her, La Morena del Puente, in Tacubaya; while down the road, El Callejón del Diablo (near the Casa de la Cultura Juan Rulfo in Mixcoac) should speak for itself.

Amityville Horror in the Colonia Ermita

An evidently unoccupied house in a nondescript street in Colonia Ermita represents the resident Amityville Horror of the district. It was occupied by a family in the early 1990s — the parents, a son, and two smaller daughters. The male offspring was the definitive ‘disturbed’ teenager, although no one could have fathomed how disturbed.

One night, while his family lay asleep in their beds, the son — obeying voices in his head — butchered them all with a carving knife. He was found unfit to stand trial due to insanity, and was committed to an asylum for the rest of his days. It does sound like the premise to the aforementioned film, yet the tale is true.

The house fell into decay. For many months the yellowing, tattered police tape was still wrapped around its front gate and door, the dusty opaque windows gazing into the abyss of a lingering horror. The abyss gazed back.

No one would live in the house; it could not be sold. I often visited there with friends late at night, since I only lived a block from it, and standing outside the dead residence past midnight never failed to elicit a cold wave of bad vibes. At some point it was sold and occupied — but not for long. Guess the new owners didn’t find the place to their liking.

Although today nothing of its exterior hints at the murders most foul committed within its rooms, the house remains a distinctly gloomy abode. 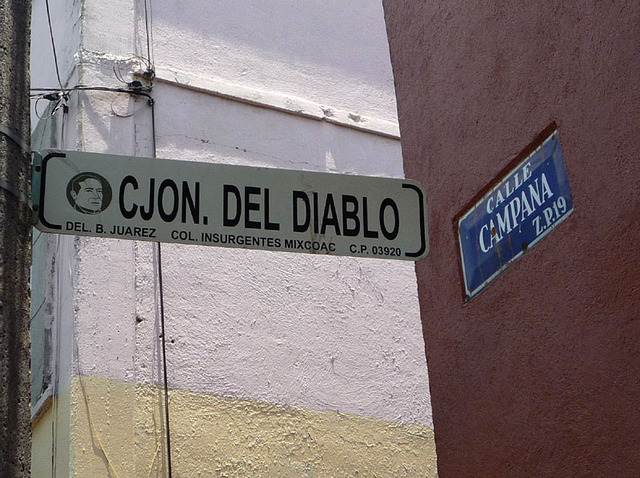 Inaugurated by President Porfirio Díaz at the turn of the 20th century, the building with its fortress-like walls and basement cells epitomized fear. Its dark moniker came about during the 1970s when it held left wing political prisoners — many of them students rounded up during Mexico’s own ‘dirty war.’

Torture and murder were commonplace. It is inevitable that a place would play host to some wandering revenants. Old prisons share with old asylums a sense of earthbound purgatory, a way station of lost souls. Lecumberri was decommissioned in 1976. Many men had met their end there by then.

Today it houses the National Archives, and workers here have reported the presence of spirits and other disturbing supernatural incidents to such a degree that they are collectively referred to as “Lecumberri’s ghosts.”

One of them is known as “Don Jacinto” and he wanders the corridors at night muttering, “Again Amelia didn’t come.” Strangely enough, the Don is believed to have been a cleaner who worked at Lecumberri and died in the 1940s. He is an identifiable entity, as these things go — rather than some ragged old jailbird, forgotten by all.