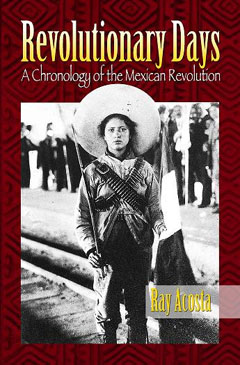 Revolutionary Days: A Chronology of the Mexican Revolution
By Ray Acosta
Editorial Mazatlán, 2010
Available from the publisher and from Amazon Books: Hardcover

Ray Acosta is a second generation Mexican-American His grandparents came from four different parts of Mexico… having fled during the height of the Mexican Revolution. After watching Ken Burns’ TV epic on the U.S. Civil War, Acosta was struck by Burns’ concluding with “something to the effect that the Civil War still has a profound impact on our lives.”

What, thought Acosta — whose relatives had nothing to do with the U.S. Civil War — has had the most profound impact on his life? The “answer was obvious, the Mexican Revolution of 1910. And what did I know about it? Nothing?”

Shamed by a non-Mexican editor for not knowing who Obregón was, Acosta began a diligent study of the history of the Mexican Revolution, keeping detailed notes, discovering contradictory information, and then in 2002 becoming a member of the Yahoo MexRevResearchers Group (www.groups.yahoo.com/group/MexRevResearchers/)

Acosta, at the beginning of each month, would post extracts of his notes. He received a lot of positive feedback. Although he did not realize it at the time, Richard Grabman, who works for a publishing company and who had published his own book in 2009, Gods, Gachupines and Gringoes, was a member of the Yahoo MexRevResearchers Group. Grabman offered to publish Acosta’s book-in-progress. Grabman and David Bodwell, then, began to go through the notes with Acosta to clean up “discrepancies and contradictions.” Acosta acknowledges that “This book would not have been possible without the tireless work of these two gentlemen.”

The first few pages list “Notable Events pre-Revolution (1829-1909),” notable of course because they are somehow related to the Revolution. For example, “15 September 1830 José de la Cruz Porfirio Diaz Mori is born in the city of Oaxaca. (Romero, Cap.I, p.1)” ” Or “8 March 1901 Doroteo Arango (“Pancho” Villa) is arrested for assault and robbery. For this he is drafted into the army. (Katz,64)”

Note that after every entry there is a reference to one of the listings in the very extensive “Sources and Bibliography.”

Following the Notable Events pre-Revolution is a day by day, month by month, year by year chronology of the Mexican Revolution.

Here are a few sample entries:

Zapata is discharged from the army due to the efforts of Díaz’ son-in-law, Ignacio de la Torre y Mier. In exchange for his release, Zapata is required to work as a groom in de la Torre’s stables. (Womack, 63)(McLynn,50)

The United States government announces an embargo on all arms and ammunition headed to Mexico. (McLynn, 143) (Meyer, H, 35) (Meyer, MR, 70)

Villa signs an exclusive contract with the Mutual Film Corporation. He agrees to schedule his battles during the day and, if necessary, simulate combat. (Krauze, 311)(McLynn, 211)

Some historians say the Mexican Revolution “ended in 1920 with the Agua Prieta rebellion that paved the way for Obregón to become president. Others say the Revolution did not end until the Cristero rebellion of 1927-1929.” In any case, by 1940, the year of Acosta’s final entry, “the country was at peace.” 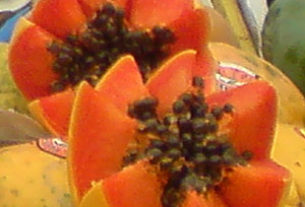 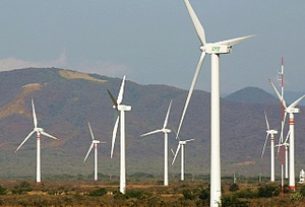