Last month’s column contained recipes and historical background on the turkey. This Mexican native, found on holiday tables all over the country, adapts well to the local seasonings and cooking techniques of several regions. November’s recipes were from the states of Chihuahua and Yucatan, which, although quite far apart in both the geographical and culinary sense, share a common fondness for meleagris gallopavo.

Since many Mexican kitchens do not have ovens, steaming or boiling, rather than oven-roasting, are more common turkey-cooking methods. Our first house in Mexico had only a two-burner stove; at that time an oven in the kitchen was the exception, rather than the rule, in the town where we live. Although our cooking facilities have vastly improved, I am actually grateful for the Thanksgiving and Christmas I spent devising stove-top methods of preparing the entire dinner. It led to an investigation of alternate cooking techniques, especially for turkey. I learned about the steaming method described in last month’s column, and about the proper way to prepare a mole, which involves cooking the turkey separately, and not in the sauce itself.

The fact that turkey, chicken, and any meat served in a mole is cooked separately, and later combined with the sauce and cooking broth, is a basic tenet of Mexican cooking. The reason for this is that it takes longer for the flavor of the herbs and spices in the sauce to develop properly than it does for the meat or poultry to cook. The separate cooking makes this type of dish ideal for preparation ahead of time. The sauce base can be prepared days, or even weeks, ahead and combined with the turkey and its broth before serving.

Somewhat akin to moles are recados, seasoning pastes which are made ahead of time and stored, ready to be used as necessary. In fact, recados, like moles, can be stored for weeks in the refrigerator and months in the freezer. Both types of sauce base are tasty, authentic, and convenient when prepared in advance.

The following recipes, from the states of Campeche and Oaxaca, are suitable for use with cut-up turkey, breasts only, or leftover cooked turkey. Their versatility will become more evident as you experiment. So have fun, happy holidays, and ¡ buen provecho! 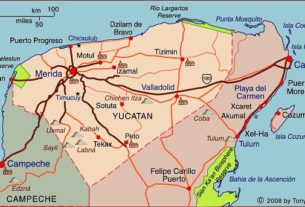