In Mexico, September is called el mes de la patria, the time when Independence is observed with a month-long celebration of Mexican identity, a significant part of which is the food.

One of the most popular national dishes is chiles en nogada, a tri-colored culinary tribute to Mexico’s flag: green chiles, white walnut sauce and red pomegranate seeds. Invented in honor of Agustín Iturbide, Mexico’s first Emperor after its Independence from Spain in 1821, it brings the various seasonal produce of its birthplace, Puebla, together into one tasty, if baroque, creation. Fruit from Zacatlán and Huejotzingo, poblano chiles from San Martin Texmelucan and walnuts from Calpan all go into this labor-intensive dish, which is topped with the glistening seeds of pomegranates from Tehuacan.

Pomegranates begin appearing in Central Mexico’s markets in August, in time for the feast of San Agustín on August 28, when chiles en nogada were traditionally served in the 19th and early 20th centuries, and still are in Puebla. They are most numerous in Mexican markets during the month of September, and most visible in chiles en nogada. However, their seeds and juice are used for several other dishes.

Chef Billy Cross tells of a visit to a working ranch in Jalisco, where pomegranate-marinated legs of lamb were roasted over an open fire, with fresh thyme branches used as basting brushes. Additionally, a sauce made with pomegranate and ancho chiles is used as a table sauce or as a topping for chiles rellenos. They are also popular in other savory dishes, such as roasted poultry, marinades and salad dressings, as well as in sweets like sorbet, jelly and fruit desserts. They are currently being used to dress up such traditional Mexican favorites as guacamole and margaritas.

Pomegranates were brought to New Spain by the Spanish padres, and cultivated in regions with drought-resistant climates. They require distinct dry and rainy seasons, such as the summer rainy season in Mexico and the Mediterranean-like winter rainy season in California, where they were grown at the missions and are now commercially cultivated in the San Joaquin Valley.

Their history begins in ancient Persia, in the area from Iran to northern India, from whence they spread to nearly all the Mediterranean countries and Southeast Asia. The Egyptians fermented pomegranate juice to make wine, and the Greeks considered the fruit a symbol of fertility. Some even claim that the apple in the Garden of Eden was actually a pomegranate. Italians believe that eating a bowl of pomegranate seeds on New Year’s Eve will bring good luck. In Spain, where the pomegranate brought by the Moors flourished, the beautiful southern city of Granada was named after the fruit.

Punica granatum is a fruit-bearing deciduous shrub or small tree that typically grows to 12-16 feet tall. With glossy leaves and bright red (sometimes white) flowers, the pomegranate tree bears a thick-skinned fruit about the size of a large orange. Inside are the seeds, covered by juice sacs called arils. These are completely edible and, when squeezed, produce a deep red juice. The tough membrane that lines the inside of the fruit is bitter and should not be eaten. Pomegranate trees have been known to live for over two hundred years, though their vigor declines after about fifteen.

Here in Mexico, local pomegranates are available for a couple of months in the fall, often cut open to display the tempting seeds within. Specialty markets in the larger cities will offer them for a month or two longer, imported from California. In the United States, California pomegranates are available from September to January. The bottled juice is found there year round, often sold in Middle Eastern grocery stores.

Because of the short pomegranate season here in Mexico, it is necessary to extract and freeze as much juice as desired for use in cooking for the next several months. Cooking the juice down by about half, to use as a glaze for roasted poultry, lamb, and baked fruit desserts, is also an option.

There are a couple of different methods for extracting the juice. One is to place the seeds in a blender or food processor, whirl, and pour through a cheesecloth-lined strainer. The other is to cut the pomegranate in half crosswise and use a lever-type citrus juice extractor. These are the manual extractors that the orange juice vendors in the markets use to get every last drop of juice, and they work very well for pomegranates. Once extracted, the juice keeps for 6 months in the freezer or 5 days in the refrigerator.

To get out the juice sacs, or “seeds”, with a minimum of fuss, and avoid getting stains on clothing, cut off the blossom end of the fruit, called the crown, and cut the fruit into quarters without removing the skin. Place the quarters in a bowl of water and roll out the seeds with your fingertips. Discard everything else, strain out the water, then eat the seeds, juice them if using the blender method, or use them to garnish main dishes, salads, desserts, cereal, waffles or pancakes. One medium pomegranate will yield ½ cup of juice or ¾ cup of seeds.

In addition to lending an exotic touch to many ordinary dishes, pomegranates are a nutritional winner, high in antioxidants, vitamin C and potassium. At the Natural Products Expo and World Ethnic Market, held this year in Anaheim, California, pomegranate powder was introduced as an ingredient for fortifying food and beverages with antioxidant properties.

If you have never tried cooking with pomegranates or using them in beverages or desserts, try some of the following recipes. If planning a meal to celebrate Mexico’s fiestas patrias, garnish your specialties with pomegranate seeds for an attractive and appetizing presentation. Try adding pomegranate juice along with the lime juice to make a pomegranate margarita, and add pomegranate seeds to your favorite guacamole recipe to add texture and bursts of flavor. 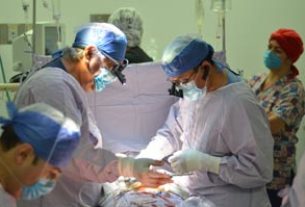 The Masks Of Mexico (Part 2)