Even before the current food obsession permeated a large segment of the population, there were those of us who collected cookbooks. Some we appreciated for the gorgeous, glossy, good-enough-to-eat photographs and some we used over and over until they were dog-eared, splattered with stains from being open in the kitchen, and literally falling apart at the seams. My old Joy of Cooking is like this, a bedraggled survivor that I have carted around for more years than I care to remember.

But the truth is, that although I remain attached to this particular volume, it mostly sits on the shelf, getting opened only occasionally, partly because so many of its recipes have become second nature, partly because my culinary repertoire has expanded to include much of the food of Mexico, but mostly because of the Internet. A few clicks, and you have more suggestions than you could possibly want for that kilo of cherimoya that looked so interesting at the market.

But although an Internet search yields recipes for just about any gastronomical craving, I do still need cookbooks, because so many of them, such as culinary memoirs, are more than just recipe collections. But finding space for them can get to be a problem. Now, since getting a tablet a few years ago, I’ve been able to expand my collection of Mexican cookbooks by storing them on a mobile device rather than buying another bookcase.

Using the Kindle app, for example, they can be downloaded to tablets, laptops and smart phones, even if your device is not a Kindle. They weigh nothing and take up no shelf space. The text search feature is a lot easier than thumbing through a book after trying to figure out how its index is set up, since there are several types of indexing styles. And the bookmarking feature takes the place of all those scraps of paper, sticky notes, and newspaper clippings that fall out of your hard copy cookbooks.

E-books generally cost somewhat less than their paper counterparts (although, in my own opinion, it should be significantly less) and are available anywhere. This is a big plus for English speakers living in Mexico, where English language Mexican cookbooks are not always easy to come by. And they are, of course, much more portable than hard copies. Set your tablet up on your kitchen stand and use a stylus instead of messy fingers while following a recipe.

While all of this is incredibly handy, there is a downside to e-cookbooks. Converting a cookbook to digital format is complicated, involving sidebars as well as text arrangement in columns for the recipes themselves. There is a tremendous difference between good and bad formatting, and there is plenty of the later out there.

That said, there are several e-cookbooks that I use regularly to expand and improve upon my repertoire of Mexican dishes. Whether visiting family in Australia or sitting on a bus from Puebla to Mexico City, I can plan meals, gather information for articles, and always learn more about Mexican cuisine and culture.

Since the point of an e-cookbook is accessibility, I look for those that are formatted in an accessible manner, using boldface, italics, etc., to define introductions, text, and the recipe itself. Good photography helps, especially with the zoom feature, which takes photos to a good, clear size.

Following are some suggestions for Mexican e-cookbooks that fit that criteria and are easy to use, with clear presentations and recipes that are uncomplicated while still featuring authentic flavors of Mexico. I love my hard copy cookbooks and will always treasure incredibly beautiful volumes like Carmen Titita’s Alquimias y Atmósferas del Sabor, Diana Kennedy’s Oaxaca al Gusto and David Sterling’s Yucatán, but there is a place in my life for the ones that can be carried around in my tablet.

The subtitle of this book, Easy, Full-Flavored, Tradition-Packed, says it all. Starting with a table of contents arranged by category, with links to the recipes, there follows an introduction with Bayless’ observations on nutritional fitness and reasons to avoid processed, prepared, and fast foods. Books like this make it easy, using modern kitchen equipment for traditional techniques.

There are lots of one-dish meals, such as main dish soups and salads that incorporate flavorful Mexican ingredients. The section on pantry basics, besides explaining the use, buying and storing of ingredients, has photos of each, clear and zoomable.

Bayless provides alternative takes (he calls them “riffs”) on several dishes. I love his version of Mexican chicken, rice, and black beans flavored with ancho chile powder, but he also suggests using chipotle powder or smoked paprika as alternatives, or seasoning the dish with Yucatecan achiote paste instead of chile powder. This is the kind of flexibility that makes the book a winner for everyday cooking, which shouldn’t require running out for special ingredients.

The author, who grew up in Mexico City and was transplanted as an adult to the United States, describes her life now as “Spanglish” and writes “Food is the natural meeting point of our cultures.” The introduction itself, before even getting to the recipes, gives several ideas for using common ingredients found in any Mexican kitchen pretty much all the time. Anyone who has spent time in a Mexican kitchen on either side of the border knows that queso fresco, avocados, tortillas, beans and salsas are indeed the basis for countless dishes, and that a huge variety of fruits and vegetables can stand in for one another in soups, salads, sides, and desserts.

The table of contents lists categories — salsas, salads, etc — with links to each. After clicking on the category link, there are links to individual recipes. There is a section called “Mexican Cook’s Trick” after several of the recipes, providing useful tidbits relevant to the recipe. An example of this, coming after a salsa recipe, is to remove salsa that has been refrigerated and let it come to room temperature before serving. (Come to think of it, I have never tasted an ice cold salsa in any Mexican home or restaurant.) Sidebars on various ingredients and techniques are nicely set apart with a different color background, distinctive but not distracting.

It took years of traveling throughout Mexico for the author to come up with 1,000 recipes, but she did, and gathered them into one enormous volume. Although lacking photos, this book really delivers a lot of bang for the buck, with all 1,000 recipes in a weightless mobile version.

Recipes are listed by category at the beginning of the book, with links to each. One category that I really appreciated, in addition to the usual appetizers, soups, salads, etc. found in just about any cookbook, is called Enchiladas, Tamales and Tortilla Casseroles. Feel like making enchiladas for dinner? Poore gives us ten different versions, which means that there is probably a recipe for using whatever you have on hand.

The last section of the book is a Mexican Cooking Glossary, with definitions for more than 100 ingredients, dishes and cooking terms particular to Mexico. These are concise, without leaving out any important information, and provide a handy, mobile reference.

Mexican Made Easy by Marcela Valladolid

Like Bayless’ book, this one has a subtitle that tells you what to expect: Everyday Ingredients, Extraordinary Flavor. And it does not disappoint. These are no fuss recipes that produce good results and even food snobs, who might scoff at the idea of a book by a Food Network personality, might just try them. It is always nice when a recipe has only a few ingredients, and even better when it tastes good, especially for weeknight cooking. (Mexico has its share of artisanal, complicated recipes, but most cooks save them for special meals.) A recipe for a trifle that contains just four ingredients will become a regular for the dessert-challenged, like me.

The author, a native of Tijuana who grew up between the two worlds of Mexico and California, writes primarily for a north-of-the border readership, but with a Mexican sensibility that gives a lighthearted spin on bicultural cuisine. Several of the recipes harken back to a childhood spent in a family of Mexican foodies, and I would not hesitate to serve them to friends on either side of the border. Photos of several dishes are appetizing and nicely styled. 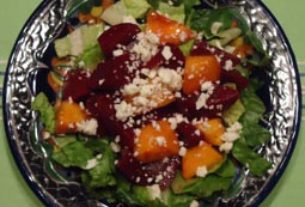