Two of the biggest buzzwords in today’s media-dominated culinary world are “fresh” and “local,” and on a recent visit to Mexico’s southern Pacific coast, we found the food to be both. Taking advantage of the region’s abundant fresh ingredients, we shopped, cooked and ate our way through the beach town of Puerto Escondido.

We had traveled down to the sultry coast from the cool mountains of Central Mexico to visit our old friends John Barbato and Beth Kelly, who host a weekly English-language talk show for Puerto Escondido’s Mega Radio Express, streamed live over the Internet ). They had invited me to do a show on regional Mexican food, one of my favorite things to research, read and write about, and travel far and wide to eat.

So it was with great gusto that I headed for the town’s regional market, with Beth as my guide, to explore its offerings. I was sure I would find things not usually seen in the mercados up in Puebla, and I was not disappointed. Pacific fish and tropical fruit are the area’s claims to culinary fame, and the Benito Juarez market was piled high with both, including a variety of avocados of different sizes, shapes and colors (one type was red) and coconut in many forms.

Coconut is sold dried, incorporated into blocks of Mexican chocolate, made into licuados, candy and ice cream, and simply eaten as chunks of fresh fruit. Coconut water, the clear liquid inside young coconuts, is sipped through a straw right from the coconut. With more electrolytes than most sports drinks and more potassium than bananas, agua de coco is great for preventing dehydration, always a hazard in tropical climates. It is sold north of the border in bottles and boxes, but nothing is more refreshing than drinking it fresh from the source.

As ubiquitous along the coast as coconut groves are banana groves, and both sweet bananas and starchy plantains play a part in this region’s cooking. Fruit from the area’s papaya, lime and tamarind orchards was also prominently displayed in the market, along with mangos and pineapples. There is so much fruit that an entire section of the market is dedicated to the preparation and serving of fruit juices and licuados.

The fruit is also used to make sweets, like cocada coconut candy and tamarind candy in miniature clay cazuelas, tiny versions of the large cooking pots sold in the market. Tropical fruit jams are also a local specialty, and after scouring the market to find them, we ended up buying them at an office promoting tourism, returning from the trip with mango and papaya chutney and tamarind marmalade. I couldn’t wait to try the marmalade as a glaze for pork, chicken or shrimp.

And speaking of shrimp, it is only one of the several kinds of seafood and fish found along this coast. There is also squid, octopus, snooker, sea bass, snapper, and the various members of the tuna family. All of these are sold at the market, both raw at the fish stands and cooked in the restaurant section in caldo de mariscos (seafood soup), pescado al mojo de ajo (fish smothered in garlic), and pescadillas (fish-stuffed corn dough that could be likened to quesadillas or empanadas.)

All of these fish, and more, looked tempting and reasonably priced, but we decided to buy a fish right from the boats. So the next morning we arose early to go down to the beach where the small fishing boats, or lanchas, come in. Customers were already gathered around the boats, eyeing the fish and haggling with the fishermen. After walking up and down the beach, stopping to check the catch on several boats, we decided on a large skipjack, or barrilete. (Some translate barrilete as bonito, but there is a difference, since black skipjack is in the red meat tuna family and bonito in the white meat mackerel family. In Mexico, true bonito is called chula.)

Some people will tell you that a barrilete is only good for bait, but we knew better, having caught one ourselves off this very same coast several years ago, when we had it filleted and cooked at a beachside restaurant. This time we brought our fish to one of the women waiting near the boats wielding huge cleavers, ready to cut up the fish on makeshift wooden plank tables.

Within a few minutes, the fish had been filleted, some of it thrown on the bait pile and some put aside for fish soup or stew. This is a dark meat fish, which is probably why it is not nearly as popular as snapper, grouper and other white meat species, but after watching a group of people chipping in to pay 500 pesos for a snapper, we were quite happy with our two huge, thick filets, which weighed five to six pounds at less than 10 pesos per pound.

Marinated and seared, barrilete is remarkably similar to steak, and is especially good in a soy sauce and ginger marinade. The similarity between Southeast Asian and southern Mexican seasonings is striking, with liberal use of chiles, cilantro, mint, papaya, mango, coconut and tamarind. Add to that the fact that the area around Puerto Escondido produces sesame seeds, and you have the makings for a Mexican-Asian fusion meal.

Going with this theme, we accompanied our fish with rice flavored with coconut and the lemongrass growing right in our friends’ garden. Lemongrass, or té de limón, is a popular herb for making tea in Mexico, but recently restaurant chefs have begun using it in their kitchens.

With regard to restaurants, there are plenty of good ones to choose from in Puerto Escondido, and we have enjoyed eating in several of them in the past. But this trip was about hands-on shopping and cooking with the plentiful fresh, local ingredients. Below are some recipes to try for a taste of Mexico’s southern Pacific coast. 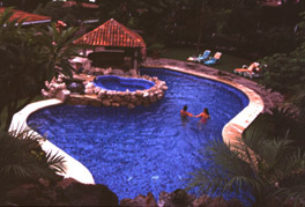 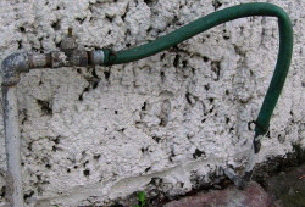