MAN TAKES TO THE AIR

RAILROAD RIVAL TO THE PANAMA CANAL

THIS MONTH IN HISTORY: JANUARY

1, 1857 Conservative general Tomás Mejía assaults the British consulate in San Luis Potosí and steals $240,000. The British government subsequently demands that this sum be included in the external debt owed them by President Juárez.

1, 1873 The opening of the railroad linking Mexico City to the Gulf coast port of Veracruz.


1, 1994 The start of the Zapatista Army of National Liberation (EZLN) uprising led by “Subcomandante Marcos” in Chiapas.

2, 1838 The people of “Upper California”, especially those in Los Angeles, persist in disobeying Mexican laws, and claim independence from Mexico. They don’t achieve it until 1847.

5, 1543 The Spanish priest, Bartolomé de las Casas, arrives in Campeche. During the early colonial period, De las Casas is known as one of the greatest defenders and recorders of Indian traditions and lifestyles.

5, 1864 French troops, under the command of Castagny, capture the city of Guadalajara.

6, 1536 The College of Santa Cruz de Tlatelolco is founded, to provide higher education for the “natives of these lands”. Sixty students begin classes.

6, 1862 The English fleet joins the French fleet in the port of Veracruz. Supported by Spain, the two countries launch a joint intervention as a result of President Juárez’s decision to suspend payments on Mexico’s foreign debt.

7, 1907 The strike of Río Blanco, in the state of Veracruz. Textile workers strike after President Díaz rejects their petition for better salaries, shorter hours and improved working conditions. The strike is crushed by brutal force; many men, women and children are massacred.

8, 1824 Francisco González Bocanegra is born in San Luis Potosí. He becomes a distinguished literary figure and the author of the words of the National Anthem. He dies in Mexico City April 11, 1861.

MAN TAKES TO THE AIR

8, 1910 Alberto Braniff pilots the first flight in Mexico. His plane, the “Voisin”, built by Gabriel Voisin in Paris, takes off from the Balbuena plains near Mexico City and flies for 1.5 kilometers, reaching a velocity of 56 kilometers an hour and the dizzy height of 25 meters.

9, 1521 The last Aztec Emperor, Cuauhtémoc, begins his reign. There is no ceremony since the Aztecs are busy trying to fend off the Spanish conquistadors.

11, 1962 The country’s record low temperatures are recorded, in the state of Chihuahua in northern Mexico. At Ciudad Juárez, the mercury drops to -23 degrees C; Ahumada records minus 29 degrees C.

12, 1571 On this black day, King Phillip II of Spain establishes the Inquisition in New Spain, to investigate and punish those with “incorrect” beliefs and customs.

13, 1916 The death in El Paso, Texas, of Victoriano Huerta, who had been responsible for the assassination of Francisco Ignacio Madero and José María Pino Suárez, respectively the national President and Vice-president.

13, 1920 Dr. Eduardo Liceaga dies in Mexico City. Liceaga had fought for the installation of potable water and drainage systems in Mexico City. In 1904, he led the successful campaign to stamp out an outbreak of bubonic plague in Mazatlán. Liceaga also brought the first anti- rabies vaccine into Mexico, after meeting Dr. Louis Pasteur.

14, 1811 The China Boat (also known as the Manila Galleon) arrives in the Pacific coast port of San Blas after its last voyage from Asia to New Spain, now in the throws of the War of Independence.

14, 1831 José Antonio Facio, War Minister in President Bustamante’s government, conspires with Francisco Picaluga to assassinate General Vicente Guerrero. For 50,000 pesos in gold, Picaluga invites Guerrero to a meal aboard his boat, “Colombo”, anchored off Acapulco. Guerrero is taken prisoner and the boat sails for Huatulco, Oaxaca, where Guerrero is handed over for summary trial and (February 14) execution.

14, 1866 The National Music Conservatory is founded.

14, 1916 Venustiano Carranza declares that Francisco Villa, Rafael Castro and Pablo López are outlaws as a consequence of Castro and López raiding a train in Santa Isabel, Chihuahua on January 10, killing 15 people including U.S. miners on their way to Casihuariachic.

14, 1931 A strong earthquake (6 degrees on the Mercalli intensity scale) rocks much of Mexico for four minutes, with damage reported in numerous states, from Tabasco to Guerrero and from Chiapas to Guanajuato.

16, 1902 A strong earth tremor destroys much of Chilpancingo, the capital city of the state of Guerrero, with heavy loss of life and considerable property damage.

17, 1811 Insurgent forces, led by Miguel Hidalgo y Costilla, lose the decisive battle of Calderón to Royalist troops. Thousands are killed; Hidalgo and other insurgent leaders take flight for northern Mexico but are subsequently captured and executed.

17, 1821 The government of New Spain gives permission to the U.S. citizen Moses Austin, to colonize, with 300 friends and relatives, the territory of Texas. The only requirement is that the families must be of Catholic faith and citizens of a European country.

18, 1911 The U.S. Navy has to abandon its Magdalena Bay base in Baja California Sur, when the base’s permit, originally conceded by President Diáz, expires.

18, 1955 Luis Enrique Erro, a renowned novelist, journalist, politician and astronomer, dies in Mexico City, where he had been born January 7, 1897. Erro was the founder, in 1941, of the National Observatory of Tonanzintla, in Puebla.

21, 1779 Ignacio Allende y Unzaga is born in San Miguel el Grande (today known as San Miguel de Allende) in the state of Guanajuato. Allende becomes one of the leaders of the Independence movement, but is captured and executed in Chihuahua on August 1, 1811.

21 1881 Manuel Orozco y Berra (born June 8, 1816) dies in Mexico City. Orozco y Berra was an agricultural engineer, geologist and archaeologist who was president for many years of the Mexican Society of Geography and Statistics.

22, 1889 Rafael Alducin is born in San Andrés Chalchicomula, (now known as Ciudad Serdán) in the state of Puebla. In 1917 (March 18), Alducin founds the national daily “Excelsior”. He uses the paper later to promote the idea of “Mother’s Day” (“Día de la Madre”), which is celebrated for the first time in 1922. Alducin dies in Mexico City on March 29, 1924.

23, 1905 Antonio Bribiesca Castellanos is born in Mexico City. A celebrated guitarist, he is considered the true creator of the Mexican six-chord guitar sound.

RAILROAD RIVAL TO THE PANAMA CANAL

23, 1907 President Porfirio Díaz inaugurates the port of Salina Cruz, Oaxaca, and the railroad line across the Isthmus of Tehuantepec, between Salina Cruz and the port of Coatzacoalcos, Veracruz.

24, 1774 The expedition led by Junípero Serra sets sail from the port of San Blas towards the Californias.

25, 1614 Rokuemon Hasekura becomes the first Japanese ambassador to the New World and Europe, arriving in Acapulco with 180 countrymen to discuss commercial relations with New Spain and Spain. Parts of Hasekura’s expedition are incorporated into Shusaku Endo’s historical novel “Samurai”.

25, 1868 Juventino Rosas is born in Santa Cruz de Galeana, Guanajuato. Rosas becomes a violin virtuoso and a prolific composer. His single best-known work is the waltz, “Sobre las Olas”. Rosas dies in poverty, at a tragically young age, in Batabanó, Cuba, on July 13, 1894.

26, 1938 The first female doctor in Mexico, Matilde Montoya (born in Mexico City May 14, 1859), dies in her native city. She became a surgeon in 1887 and spent most of her working life in Cuernavaca and Puebla.

28, 1875 Julián Carrillo Trujillo is born in Ahualulco, San Luis Potosí. He becomes an innovative musician, responsible for one of Mexico’s major contributions to the musical world: “sonido 13”.

28, 1934 Gregorio Torres Quintero, educator, writer and historian, born in Colima, dies in Mexico City. Torres Quintero developed the “onomatopoeic method” for teaching, which led to considerable educational progress and remained in use for decades.

31, 1917 After 66 regular working sessions, and one extraordinary session lasting three days, the new federal constitution is finally approved by the 184 representatives in Querétaro. The new constitution is promulgated on February 5, which is still celebrated annually by the “Constitution Day” national holiday.

Published or Updated on: December 28, 2019 by Tony Burton © 2009
Share This:
Tagged culture-customs history 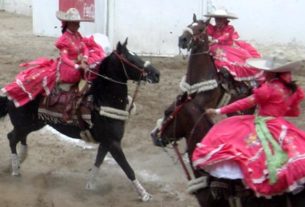