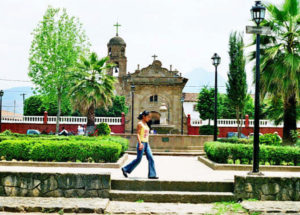 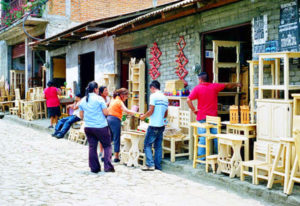 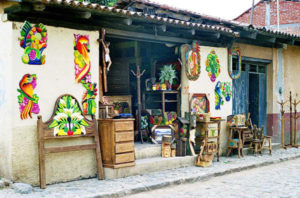 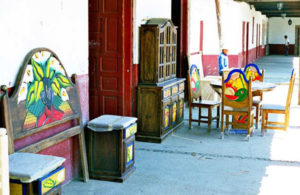 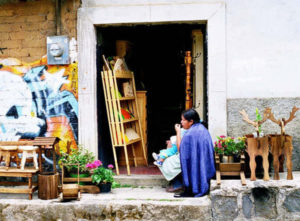 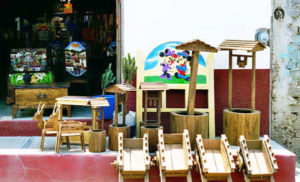 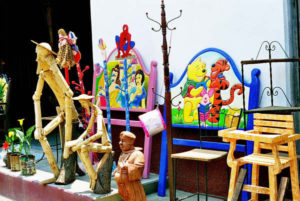 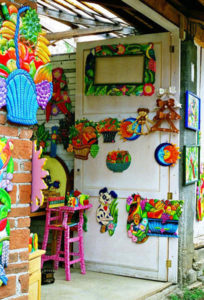 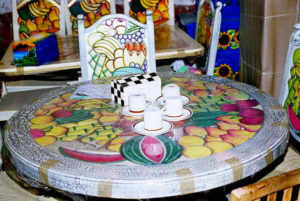 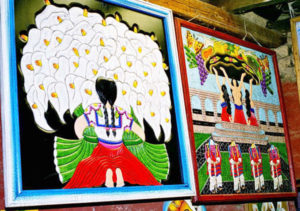 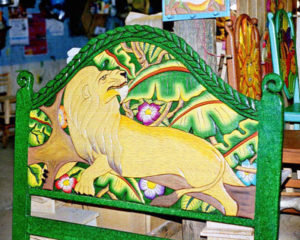 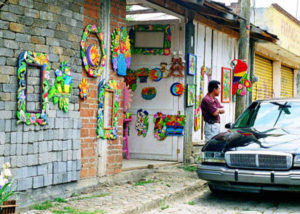 An endless number of approaches to familiar motifs show themselves throughout the town.

A trogon, its cherry red neck gleaming against a body of emerald green, crawls up the side of a picture frame, followed by a chattering monkey. Mickey Mouse, decked out in a blue jacket and red trousers, offers a rose to a demure Minnie Mouse carved into the headboard of a bed frame. A cross-eyed Dalmatian puppy stares from a wall-hanging, its blue ears flopping over its face as the canine waits to decorate some child’s room, bursting from a doorway along the cobblestone streets of Cuanajo like the other images protected by the imagination of innocence.

This little gem of a town a few miles west of Morelia – complete with a charming colonial church, a carnival of eye candy, and a mesmerizingly slow place – beckons visitors looking for a trip to another time, a place where nothing can disrupt the fantasies of youth. Like Superman jumping from a phone booth, blocks of wood enter the town’s workshops and reappear days later transformed into a circus of shapes and colors.

The plaza is a rather simple affair, small and manicured with hedges around small gardens of roses and palm trees, with ficus trees providing shade for the iron benches along the walkways. Broad eaves of terracotta hang over sidewalks leading to small grocery stores and carved furniture establishments.

Mueblería Ambakity Muebles Rústicos y Tallados sells a number of furniture items in varying styles, fashioned by members of the same family. A wardrobe depicts a man drowsing beneath sombreros next to a blazing fire, molded in a tranquil floating effect with fluid lines. The headboard, with sunflowers painted the colors of solar flares against emerald green leaves and aqua blue stems, is done in the same style. However, a china cabinet with a rustic, earthy look bears images with a choppy, more energetic effect, revealing apples, pears, bananas and grapes that seemed to nervously scramble from a basket. A table and chairs strike a balance between the two styles, a graceful approach that evokes lively movement.

Robert Toy and his friend Joan James, both American ex-patriots currently living in Patzcuaro, are enjoying their little shopping trip to Cuanajo one Sunday morning.

“I think everybody who comes here initially wants to decorate the entire house like this,” says Toy. “But eventually you settle down to one piece. If you walk around enough, every store has its style. It’s very subtle, but it’s very different. Some, I would consider gaudy, some very rustic, some are very high end.”

Walking down one of the streets will give you an idea of what he’s talking about. Peek inside a plain brick dwelling and you might see sunlight flooding the face of a sad moon, painted carvings of Pope John Paul II and the Virgin of Guadalupe, and a crib engraved with the Three Little Pigs and the Gingerbread Man. A crouching Spiderman shoots a web from the confines of an unpainted headboard leaning against a wall.

On this Sunday morning, truckloads of lattice-backed chairs, stools, carved trunks, and corner shelves rumble slowly down a road and out of town. A woman stirs potato chips in a hot skillet before bagging them for sale; a man with a deeply-pitted face hangs out in a doorway, his dugout eyes frowning against the sun.

At El Pina Mueblería, Winnie the Pooh gets into a tussle with Tigger on a headboard, capturing the imagination of a little girl who scrambles down from her mother’s arms to explore the playground of images inside; an older boy crawls around the wooden Don Quixotes sitting on logs in deep thought. The store also has tables carved with men leading horses through hillside villages where women gather with gourds around fountains and a sun rises over church steeples and green hills.

An endless number of approaches to familiar motifs show themselves throughout the town, including that of the maiden with her back turned and bearing a bundle of flowers. This motif, popularized by Diego Rivera, has taken on numerous manifestations throughout Mexico. At Doña Ofe in the plaza, members of Ofelia Prudencio Cabrera’s family sell fragments of their imagination that have crawled into their wooden pieces and received the ointment of paint, giving them their final sparkle.

A carved picture of the maiden shows her in a red pleated skirt facing a bundle of flowers in light shades of lavender, orange, red, and gold. She appears often in drastically different guises, holding loads of flowers on trunks, headboards, tables, and other pieces of furniture. At Mueblería Ambakity Muebles Rústicos, she can be seen on a headboard with her head turned slightly, but not enough to see her face. She wears a striped blue rebozo and red skirt, and the position of her arms, weighed down by the load she carries, evokes an impression of strength, as if the has borne the burden for many years. Elsewhere in town, Hector Paque has a servilleta depicting the maiden as a little girl, and a framed picture depicts her with brown hair, her feet showing beneath her black dress.

Next door, at Cruz Vega’s place of business, the maiden is carved into a very large picture in which she is in an open meadow. Her skin is much darker in this rendition, and she grasps the stems of a balloon-shaped bundle of calla lilies and sunflowers about three times her size while her feet poke out from the hem her red dress.

Just up the street at El Pina Mueblería, there are even more renditions of the maiden with flowers; in one carved picture, she wears a bright red dress and dirty blonde hair, quite a different treatment of the subject. In another she wears a brown dress that matches her brown hair and grasps a bulging bouquet of calla lilies. A blue shawl is draped across her white blouse and a single lily lies on the ground at her side. Here, however, the maiden finally shows her face on a trunk. It’s in profile, but she has full cheeks with thin cherry lips and sharp glistening black eyes.

In the village of Cuanajo, fragmented images from discarded memories find new life through the talented workmanship of the local artisans. A playful puppy, a squawking parrot, and baskets of fruit remind visitors of life’s vitality and the power of play. Man’s destiny to return to the timeless joys of life form the fabric of this community where the pace of life has made the daily instruction of this lesson possible.