Juan Mata Ortíz is a small village of potters, farmers and cowboys in Northern Chihuahua. About 30 years ago, an unschooled artistic genius, Juan Quezada, taught himself how to make ollas, earthenware jars, by a method used hundreds of years ago by the prehistoric inhabitants. Now, his works are known worldwide and over 300 men, women and children in the village of less than 2,000 make decorative wares. Much of the polychrome and blackware is feather light and exquisitely painted. 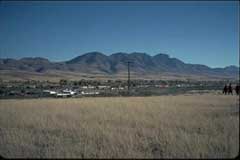 Traveling in Mexico is always an adventure, but it is not a traumatic drive from the U.S. border to Mata Ortíz. The Port of Entry is multiple choice, depending on whether you enter from Arizona, New Mexico or Texas. (See below for the Adventure of the Border Crossing). Briefly, here is how to get there from here for each of the three states. In each case, Mata Ortíz is only three to four hours from the border.

Arizona: The best place to cross is at the Douglas/Agua Prieta port. However, in December, January and February make sure to check the weather. Snows occasionally close the Puente San Luis, a narrow pass high in the mountains.

Southeast of Tucson, take the Benson exit off I-10 and follow the signs through St. David’s and historic Bisbee to Douglas. If staying overnight on the U.S. side, I recommend a B & B or a boutique hotel in Bisbee. There are several good restaurants and the “old town” is clean and quaint. I don’t recommend staying at the famous Gadsen Hotel in Douglas. Over-rated is a polite description.

The Agua Prieta border personnel are muy amable and soon you will be on your way. Getting your permiso for your car is almost painless. Signs point you to Mexican Highway 2. Head south and east through rolling country and over the mountains into Chihuahua. At Janos, follow the excellent signage to the right on Highway 10 to Nuevo Casas Grandes. This city of 40,000+ is an agricultural center for the northern part of the state. You will see Mata Ortíz pottery advertised here, but I suggest you buy in the village. Selection is greater and prices are less than half what the stores charge.

Drive straight through Nuevo Casas Grandes, staying on the same road by which you entered the town and you will pass through some farmland to (Old) Casas Grandes. Stop and see the ruins at Paquimé, named a United Nations World Heritage site last year. The drive continues on the same road through lush irrigated fields and orchards to the Mormon community of Colónia Juárez. After descending the hill into the Colónia, turn right at the stop sign and continue past the church. Turn left, cross the one-lane bridge and make an immediate left. Another 300 yards brings you to the end of the pavement and a gravel road begins. Follow it for 12 miles through the dust and mesquite into a valley lined by the Sierras. You will pass the hamlet of Cuautemoc and arrive at the ejido San Diego–home of a hacienda built in 1902 by Luis Terrazas, who owned a goodly portion of Chihuahua before Pancho Villa did his thing. Admire the old structures and the incredible stone corral.

Another couple of miles takes you into Mata Ortíz. You’ll stop first at the top of a hill overlooking the village strung along the Río Palanganas. The setting is magic. If you are looking for the Posada de las Ollas, turn left after crossing the railroad tracks into town and take the third right. You’ll see the beautiful rock work wall one block down on your left.

If you are just staying the day and looking for potters, stop at almost any home and you should find pottery. Or, drop by the Posada and Lalo or Rosa will organize a guide for you.

Texas: The only reason I would recommend battling through the Juarez traffic at the entry point via El Paso is to avoid crossing at the Palomas/Columbus, New Mexico border. Follow the signage for Chihuahua City through Juarez, but do not take the turn-off for Nuevo Casas Grandes. Instead, continue south another ten miles to the customs offices to get your tourist visa and car permiso. Then, backtrack and take Highway 2 west. You will end up at Janos and can follow the directions above.

New Mexico: A good alternative coming either East or West on I-10. The only caveat is the Palomas border staff (see Border Crossing Adventure, below). Take the Deming, NM exit off I-10 and continue south to Columbus. The small museum here is interesting and the setting is historically significant. Pancho Villa made it as far as Columbus in his aborted attempt to invade the United States. Black Jack Pershing, his men and machine guns cut that tourist’s visit short. Three more miles takes you to the border crossing at Palomas, Mexico and from there it is a straight drive south to Mexican Highway 2. Turn right and cross the wide valley to Janos.

The Great Border Crossing Adventure: The easiest border crossing is at Agua Prieta, across from Douglas, AZ. The staff are professional and the procedures move smoothly. From the El Paso/Juárez crossing, one must travel south and then backtrack to Highway 2, which is a hassle. Depending on time-of-day, the wait for documents can be up to half an hour. Generally, the staff are efficient, but once I was only issued a 10-day tourist visa (instead of 180 days) on the whim of an official and another time the person actually issuing the car import permit decided that the letter from my leinholder, a bank, was too old. I had to have a new letter faxed from Indianapolis. The clerk barely glanced at it when I returned with the paper. After all, he couldn’t read English.

This week, I actually talked to someone who said they received a 180-day permit. I was astounded.

From any direction, the drive itself is painless and passes quickly. The roads are two-lane highways and, as is typical in Mexico, are shoulderless. Via Arizona, the route involves two sets of hairpin turns through the mountains. From the east (Texas and New Mexico) one drives through flat desert and farmland.

Be prepared to be stopped by at least one military checkpoint. Don’t be nervous at seeing young kids with big guns. View the whole matter as a cultural experience. Note, for instance, that the fresh-faced youngsters will usually approach the vehicle while grizzled veterans remain in the background. I’ve unilaterally decided this is to reduce the intimidation factor. The soldiers will be apologetically polite. Practice your Spanish and ask where they are from. It will invariably be from a state in another part of the Republic.

The goal is to reach Mata Ortíz and it won’t be an Indiana Jones adventure to get there. First time visitors usually describe the village as “magic.” Hopefully, you will feel the same way–and remember, getting there is half the fun.