We took an early morning ferry from Cozumel to Playa Del Carmen. The warm wind and sea spray felt good on our frost bitten faces, fresh from Northern California.

We had previously toured the Mayan ruins of San Gervasio on Cozumel. They are special in that Mayan girls came to the island as part of a ritual of womanhood, similar to the modern Mexican custom of quinceañera. The principle deity of San Gervasio is Ixchel, the goddess of weaving, women, childbirth, pilgrims, the moon, and medicine. With all those responsibilities, it is no wonder she chose tranquil Cozumel for her home. Although the pyramid at San Gervasio is not as high as Cobá or Chichén Itzá, the ruins have a primitive architecture that is interesting. There are many large and colorful iguanas at San Gervasio that love to have their photos taken.

At Playa del Carmen we rented a car and drove south to Tulum. The ruins of Tulum are on a limestone bluff overlooking the aqua Caribbean and are the only Maya ruins located next to the sea. Tulum is a walled city built in the10th century. When the Spanish arrived, about 600 people inhabited the area, living in platform dwellings. The word “Tulum” is Mayan for “wall,” which was built around the city to protect it from invading rival tribes.

The wall did not stop the Spanish and the city was abandoned about 70 years after the Spanish conquest. It was an important seaport for the Mayans when the Spanish arrived, but now the seaport is a beautiful sandy cove under the shadow of the castillo (Mayan castle), where tourists swim and sun. The over-whelming feeling I had when I saw the complex architecture and intricate frescoes from the 13th-century was that Mayan culture was equal to the Spanish and it is unfortunate that the Mayans did not have the ability to keep their culture alive. Driving through the Yucatán, you still see traditional Mayan huts, but I have not seen Mayan villages comparable to the Native American towns in the United States.

From Tulum we drove northwest for about an hour along a fairly good highway to Cobá. Driving at 60 miles per hour, it is difficult to see the occasional car-eating chuckholes, which is probably the reason why the wheels of our rental car were out of alignment. We arrived about 1 p.m. on a Saturday and the parking lot was nearly empty, a big change from the line of tour buses at most archeological sites in Mexico. After a typical Mexican lunch at an outdoor restaurant, we entered the park and rented bicycles. 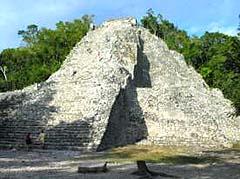 Cobá was a city-state covering 42 square miles, and although most of it is not yet excavated, there are still several miles of trails between the four groups of ruins that have been excavated and it is best to rent bikes or take one of the pedal-taxis. From the top of El Castillo, which is the tallest pyramid in the Yucatán, (even taller than the El Castillo at Chichén-Itzá) you can see for miles in every direction, with jungle-covered pyramids and ruins poking out of the jungle floor. We stayed in the park until dusk and we were alone when we rode our bikes along the sacbe, a Mayan raised road, to a large group of intricately carved stelae, carved stone pillars and slabs Walking among the stelae in the shadows of the setting sun, I thought I could feel the presence of the Mayan gods, but my wife and son said I was just getting hungry.

Our plan was to drive to Chichén-Itazá that day, but it was about 7 p.m. by the time we drove into Valladolid, and I did not feel like driving the additional 25 miles. We stayed at Hotel El Mesón del Marqués, a restored old colonial hotel across from the main plaza. For $67 we got a large room, which had recently been renovated, with two queen beds, A/C, large clean bathroom and TV. The hotel has an excellent restaurant in the courtyard, surrounded by hanging plants and paintings by Frida Kahlo. Her style of art, which is often grotesque and depressing, is not my favorite, but it is worth seeing. The excellent movie about her life brought her art into perspective for me and gave me a greater appreciation for her style.

On Sunday morning we toured Cenote Zací, just a few blocks from the hotel. It is a very popular place with the locals to stay cool in the heat of the day. The roof of the huge cavern has been opened and concrete trails go down to the large underground pool, which is surrounded by stalactites and tree roots wrapped around the rock. There is a restaurant above the cenote that has good food and a great view of the cenote at night when the cavern lights are on. After touring the cenote, we went shopping at the town market, where we bought the local honey made from the tzi-tzi-ché flower. The women at the market all wore beautiful embroidered Mayan dresses.

We beat the tour buses to Chichén Itzá. Admission on Sundays is free. The grandeur of the ruins of Chichén Itzá is awesome. In the center of the four square mile ancient city is El Castillo, which seems taller than the pyramid at Cobá, possibly because of the vast open area around it. The rows and rows of columns flanking the Temple of the Warriors reminded me of the columns from the Roman Empire I had seen in Europe. 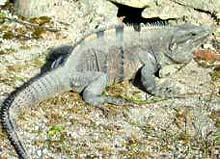 The carvings of the warriors on the walls of the Temple are in relatively good condition and the detail can still be seen. Although the Mayans abandoned Chichén Itzá hundreds of years ago, we saw one life form that stayed and thrived: leaf cutter ants. It was fascinating watching the army of ants cut the leaves and carry them several hundred feet through the jungle to their nest. The old rotted leaves were several feet deep at the nest. It took us about 3 hours to tour all of the ruins. They have a light show at night which we would like to have seen, but we had plans in Merída that night.

We arrived in Merída late Sunday afternoon, and most of the shops in the central market were closed, but Curios Lucia’s, where I had shopped before, was still open. They have an excellent selection of blankets and local crafts and will barter. Every Sunday the main plaza and a section of the major downtown street are blocked off from traffic and there is a festival called Domingo en Merída. It is worth going to the city just to see the festival.

There are always several bands, some playing traditional Mexican music accompanying dancers in traditional dress. Other bands play mambos, salsa, and cha-chas, and about a thousand people dance in the street and listen to the music. Merída is a beautiful old colonial city that reeks with history and culture. It has excellent inexpensive hotels and restaurants. We had dinner at Pórtico del Peregrino, which has a quiet garden courtyard. We strolled through the plaza and after trying on several guayaberas, I bought one from a store next to the Ayuntamiento. The shirt is the best I have seen, and the bartering was difficult. The guayabera will be perfect for the Mexican wedding I am attending in April.

Monday morning we took the toll road, which cost about $24 one-way, toward Cancun. It is a lot more fun to take the old highway, but the toll road cuts the trip from 5 hours to 3 and made it possible for us to catch the 1 p.m. ferry back to Cozumel. We had guest coming to our condos that evening and needed to get back. When I have more time, I would like to spend several days in Merída and the surrounding towns.