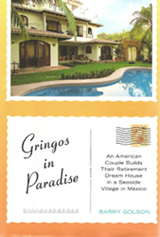 Barry Golson’s book, Gringos in Paradise, is a warm, entertaining, and illuminating tale of the experiences Barry and his wife Thia had while building their “dream house” in Sayulita, a little seaside village forty-five minutes north of Puerto Vallarta. The book is organized around “the house,” beginning with their initial impulse purchase of a piece of land with a lovely view on a high hill, followed by “buyer’s remorse,” followed by the purchase of a more appropriate lot in Sayulita itself, and then the relentless push toward final completion six months later, only hours before their family would be arriving from the states for Thanksgiving.

Barry’s book is about much more than building a house. It is about a couple facing retirement and ready to work together to reinvent their lives. It is about “Gringos in Paradise,” who are discovering what life in Mexico is really like. It is also about gringos seeking to improve their lives: “As Mexicans come north to seek a better living, Americans will be heading south in greater numbers to seek a better life.” This observation is later echoed by Doña Lety, “who works out of the front room of her home and hands out the orders [for tortas and fruit drinks] on a shelf over the sidewalk.” Barry and Thia introduce themselves, saying that they are new residents and Doña Lety responds: “‘Someday soon, Mexicans’ – she waves a hand northward ‘- all up to El Norte, and Americans’ – a wave in the other direction ‘-all down here.'”

Barry loves the Mexican people and had always been drawn to Mexico (he had also lived in Mexico City several years as a boy): “…it seems to me that the Mexicans I have encountered appear better-adjusted, happier than their northern counterparts.” They “appear more cheerful, less anxious, and more at ease with life’s flow than many Americans. (A recent global survey polled citizens’ stated sense of “happiness” in seventy-five countries, and found Americans down the list at number fifteen, while Mexicans ranked number two….”)

The Golson’s were building, as do many ex-pats, on a tight budget, and this book can help guide any gringo who is in the same situation. They often felt they were “going to go broke,” and that “Neither of us has quite faced the crucial rite of passage for those of us who reach semiretirement age without pension or adequate savings: the realization, finally, that there are no more paychecks coming our way.” And the realization that they might have to “migrate back to the States for a time and somehow earn enough dollars to be able to afford to return to Mexico. How very Mexican of us.”

One Mexican tells them, “I don’t ask God to give me something… I just ask him to put me where I can reach it.” Barry and Thia stretch out their arms and together reach for their dream. They interview several architects and builders before they finally settle upon their architect, Aurelio Carrilo, “designer and your humble servant,” and their builder, and a very fine one at that, Beto. “Beto and we built this entire house on a handshake. No contract no lawyers, and not one misunderstanding in six months.” (Imagine that in the United States.)

Aurelio, the architect, has his own ideas about different cultures coming to Mexico to build houses: “Germans, by far, are the hardest to build for; they are so exacting about organization and time, it can be overwhelming in this climate. Next, he says, come Canadians, because their currency is weak [no longer], and they are always looking for a deal. Next toughest (more so than Americans) are the Mexican clients, who want everything but everything on the cheap. If an American wants to build a house in ten months, Aurelio has learned that it is an economic agreement, and the American will abide by it, and expect you to abide by it, all the way to the last day. If a Mexican wants something in ten months, says Aurelio, it is more of a wish.”

Throughout Gringos in Paradise, Barry shares with us his deepening understanding (and appreciation) of the Mexican character. With land speculation lifting prices higher and higher all along the Pacific Coast and particularly in Sayulita, Barry asks Doña Lety, “Are you tempted to sell your house…? You must have been offered a fair price for such a good location.” Doña Lety’s answer, “Ah… but what would I do if I got the money? Give it to my children, let them spend it on cars and cerveza and pretty things. Soon the money would be gone, and my heirs would be without a home, a business. Here, our family gathers, and here I have a business to pass on to them.”

He has little tolerance for those gringos who remain aloof from their Mexican community, who gather in the little cafes to complain: “My actual experience, as opposed to café chatter, is that I have met far more competence than fecklessness, more honesty than venality, and more thoughtful, cultured civility than small-town provincialism.”

Golson also introduces us to some Mexican history, including some details about his own grandfather, Bernard Golson, a Frenchman who in the early 1900s sought adventure and fortune in northern Mexico, “eventually managing a gold, silver, and lead mine near Parral,” where he met and became friends with Pancho Villa. This was fortunate, because when a corrupt colonel had his grandfather was “put up against a wall to face a firing squad,” Villa galloped on to the scene, “cussed out his colonel, and set his friend the Frenchman free.”

To make the book even more useful, Barry has provided a reference section that begins with “10 Gringo Myths about Retiring in Mexico,” listing such misconceptions as “Crime is rampant,” “You’re cut off from family and friends,” “Mexicans are lazy,” “Mexican medical care is inferior,” and then dispelling each of those. “Resources” lists websites that he found useful for “novice retirees,” including of course www.mexconnect.com. His annotated list of useful books includes some favorites of mine, Carl Franz, The People’s Guide to Mexico (“…the best guide to Mexico ever.”), Don Adams, Head for Mexico: The Renegade Guide (“Funny, utterly irreverent….”), and Jack C. Smith, God and Mr. Gomez (“Classic comic tale of house-building in Baja California….”). As if this were not enough he adds a feature so often missing, an index.

Gringos in Paradise:
An American Couple Builds Their Retirement Dream House in a Seaside Village in Mexico

MexConnect is reader-supported. Purchases made via links on our site may, at no cost to you, earn us an affiliate commission. Learn more.
Published or Updated on: December 1, 2007 by James Tipton © 2008
Share This:
Tagged book-reviews James Tipton real-estate 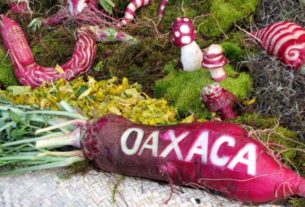 Tzurumutaro, Michoacan: a town at the crossroads