Photo gallery: The art of peace: Art, music and theater in Cancun 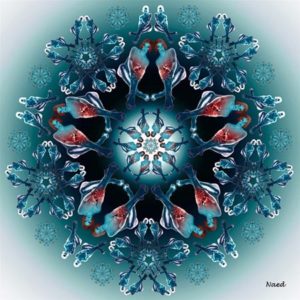 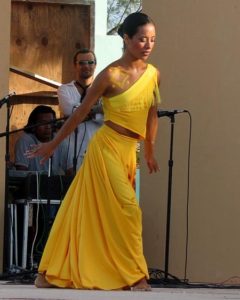 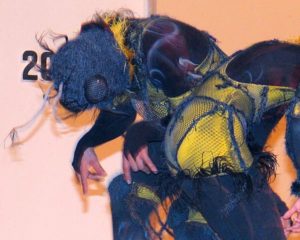 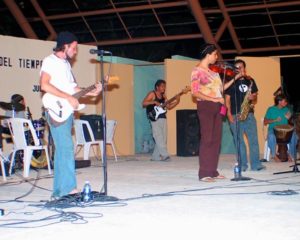 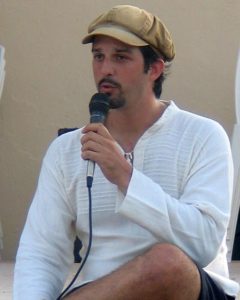 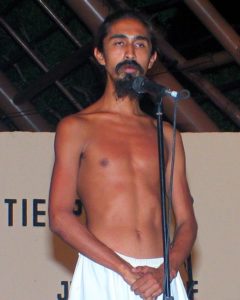 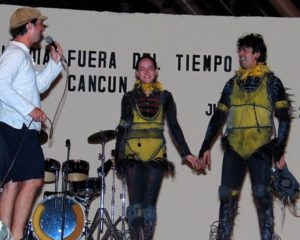 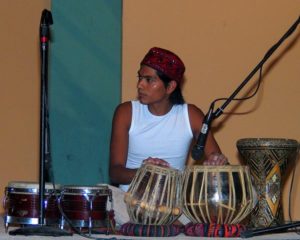 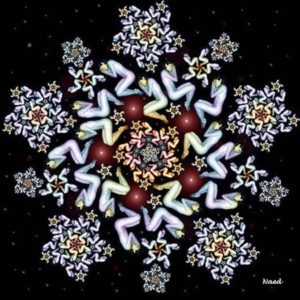 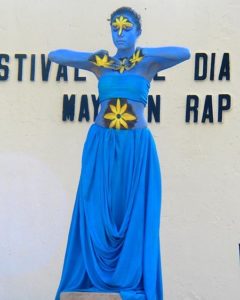 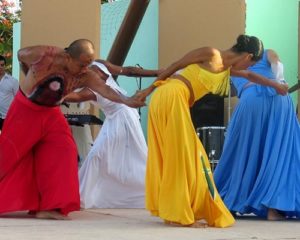 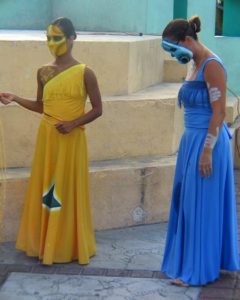 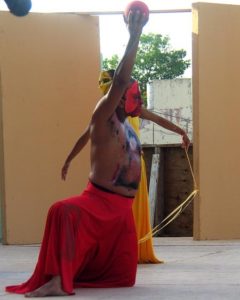 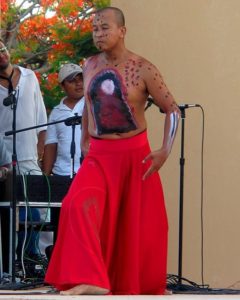 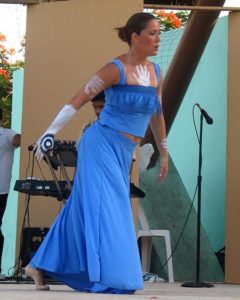 A lone woman stands on a quiet stage, covered almost entirely in blue. She wears a flowing blue skirt and bandeau, with matching paint saturating the skin of her face and entire body. The impression of an unending azure is broken only by the appearance of five yellow flowers: one painted on each hand, one on her forehead, one on her upper chest and one on her stomach. Unmoving, she is a statue made of flesh and bones.

Suddenly, soothing music begins to play and the living statue begins to move. The flowers on her hands seem to be floating as the woman moves her arms, the music providing the perfect backdrop for her slow, fluid gestures. The music contains the voice of a woman, whose narration speaks of philosophical questions: ” ¿Qué es la existencia? No está escondida bajo ninguna roca… eso es obvio.” (What is existence? It is not hidden under any rock… that is obvious.) The performance has a meditative quality to it, as eyes and ears process the message of tranquility being projected from the stage and onto the audience below.

As the living statue’s performance comes to an end, four dancers slowly ascend the stage, each cloaked in brightly colored costumes, their faces replaced by otherworldly looking masks. They are accompanied by calming music, sans lyrics, which infuses the performance with an air of serenity that matches the graceful movements of the dancers. Their agile bodies, marked with mysterious symbols, swirl and glide in an intricate choreography.

And what of the cryptic symbols painted on the dancers? They are integral to the performance, as they give a deeper insight into what the dance signifies. The presentation “is a piece about time,” according to choreographer Manny López, who created the dance especially for the Día Fuera del Tiempo / Día Mundial de La Paz (Day Out of Time / Global Peace Day) event at which it was performed by dance group Arteroo Danza.

The event, which occurred on July 25th in Cancun, Quintana Roo, transformed the city’s Parque las Palapas into a celebratory space in which artists, residents and tourists gathered to honor art, peace and time. The particular date of the event is significant, as it is actually considered a “day out of time” or nonexistent day marking the start of a new year in the 13-moon calendar, a measure of time that combines elements of calendars from the Maya culture and other ancient civilizations.

The dance, therefore, tied in directly to the theme of the celebration. As López explains, the piece is an interpretation of elements that are conveyed through the 13-moon calendar. Dancer Vanessa Arcega of Arteroo Danza elaborates, explaining that each performer represents a different seal of the calendar. The symbols painted on their bodies for the presentation, as well as the colors of their costumes, denote what seal each dancer embodies.

For example, Arcega, who was dressed in a yellow costume for the show, says that she symbolized the star seal. Patricia Madero, dancer and director of Arteroo Danza, wore blue and represented the hand seal. With white as her costume color, dancer Fernanda Gomez personified the worldbridger seal. Wearing red, dancer Marco Antonio Ramirez embodied the moon seal.

The seals are associated with different properties, much like the zodiac signs. For example, the star has art as its essence, the hand: healing, the worldbridger: opportunity and the moon: flow. The seals are used repetitively throughout the 13-moon calendar, thus identifying a specific characteristic for each day of the year.

Since this calendar is based on the cycles of the moon (it has 28 days in each of its 13 months), supporters say it can put humanity back in harmony with nature and on the path to peace, by keeping us in tune with the rhythm shared by the universe as a whole. As López points out, the cycles of the universe are in tune with the natural rhythm of each human being. In this way, we are intrinsically tied to the universe or, as López says, “all pertain to each thing.”

The universe was the central theme of a photographic presentation at the event, as artist Edna Vite’s slideshow offered a glimpse of the cosmos through the use of an ancient art form. Pulsing with life, her works feature photos of people woven into intricate geometric designs known as mandalas, which have been used for centuries to symbolize the universe. In addition to their symbolic significance, “mandalas are transmitters of energy,” Vite explains, adding that they can be used for meditation purposes and also to convert negative energy into positive energy. Vite’s slideshow was reminiscent of looking through a kaleidoscope lens, as mandala after dazzling mandala exploded onto the screen, their mesmerizing designs formed of photos of ordinary humans transformed into vibrantly colored beings.

This ancient art form urges the viewer to look anew at their surroundings, as mandalas can be found virtually everywhere. As Vite explains, the geometric patterns associated with mandalas exist in all of nature, “from a flower to the entire universe.” Like Vite, actors Daniel Gutiérrez Sánchez and Lorena Allende offered an interesting perspective of the universe with their presentation of vignettes from the play Humanos, Insectos Invasores (Humans, Invading Insects).

As the performance began, two human-size cockroaches crawled onto stage, each settling into an opposite side of the set. Suddenly, a man’s voice was heard announcing that there would be a fight between the two insects.

As the narrator spoke, the two cockroaches sized each other up. They then began to fight, their moves forming a frolicsome choreography that matched the instrumental music accompanying this scene. It all came to an abrupt end as “Little Roach” Perez jumped onto The “Terrible” Roach and gave him a bear hug, with the pair then exiting the stage in this position.

In the second vignette, the actors adopted the roles of bees beginning their day with a bath of honey. The narrator’s voice was once again heard describing the scene. ” La floración llega y las abejas se encuentran. Se abrazan, se renuevan, se bañan de miel…” (The flowers begin to bloom and the bees find each other. They hug, they renew themselves, they bathe in honey….)

The music started, accompanying the movements of the two bees, as they played together and explored their surroundings in this lighthearted scene. They then exited the stage with the female bee in front and the male behind, intertwined.

The vignettes drew on the audience’s sentiments, as the sweet and silly actions of the insects humanized these creatures that most people think of only as pests. Gutiérrez Sánchez, who wrote the play, says that when it is performed in its entirety, various insects are shown interacting in their different worlds and then man arrives at the very end and kills them.

He says he wrote the play to show how humankind is “like a virus that keeps consuming and consuming.” Gutiérrez Sánchez feels that people today are not living conscientiously and therefore, the inhumanity of the world as a whole has reached its most horrible point. “People need a restart,” Gutiérrez Sánchez says, pointing out that “we have to return to our origins.”

Allende echoes this sentiment, as she explains that human beings have to be aware in how they lead their lives, paying attention to even the tiniest creatures that inhabit our world. As she notes, “the smallest being may appear insignificant, but it has a transcendental role that can affect us.”

This topic of reconnecting with nature and our roots was a central theme of the celebration, as various artists and organizers talked about how this path can eventually lead to a world at peace.

During the event, host and organizer Michel Tremblay talked about how when humans examine our roots, we realize that there really are no differences between us, and that this awareness can lead us to achieve peace in our universal community. He also spoke of how peace manifests itself through artistic expression.

This idea is central to Tremblay’s organization, MayaPAN, which is a part of the worldwide movement known as Red Arte Planetario (RAP) or Planet Art Network (PAN). MayaPAN, which Tremblay co-founded this past February, was the main organizer of the Day Out of Time / Global Peace Day celebration, with others both inside and outside of the RAP/PAN movement helping out.

Tremblay characterizes RAP/PAN as a network of different groups that hold the same vision, “a universal vision of synchronizing humanity in understanding, evolution and peace.” At the heart of the movement is the call for a global changeover to the 13-moon calendar, which RAP/PAN members believe will lead to a more harmonious existence for all of humanity. Members have also adopted the Banner of Peace, which was created in the 1930s by artist Nicholas Roerich to protect cultural sites around the globe. The banner consists of three red dots enclosed in a red circle on a white background. According to literature published by the Nicholas Roerich Museum, the three dots represent art, science and religion, which are the main components of culture (symbolized by the encompassing circle). “The banner signifies the unity of spirituality, the arts and the sciences, or said another way, the unity of creativity, imagination, reason, intellect, intelligence and the spirit, the emotions,” says RAP/PAN member Sri Kauak. Members of RAP/PAN use this banner to illustrate the aims of their movement. They have also expanded upon Roerich’s motto of “Pax Cultura” to read “Pax Cultura, Pax Biospherica.” In other words, “Peace through Culture, Peace with the Biosphere.”

The RAP/PAN movement is called Red Arte Planetario/Planet Art Network because “the ultimate expression of a human being is art. Art creates conscience and conscience creates peace,” Tremblay says. Defining exactly what art is can be a complex topic, as Sri Kauak explains. “Art is not only theater, dance, painting, poetry and plastic arts,” he says, noting that “art is a child jumping, a person nourishing himself, a leaf falling.” As Sri Kauak points out, art can be looked at as any action that occurs in harmony with the universe. And therefore, those involved with the RAP/PAN movement believe that art is the natural expression of pacifists, he adds.

Sri Kauak has been involved with the RAP/PAN movement for four years now and has watched it grow throughout Mexico. For example, this year marked the first occasion that Day Out of Time festivities, which have been held in various countries around the world since 1992, were held as a public event in Cancun. Sri Kauak, who helped to organize the celebration, estimates that around 500 people or more attended.

None of the performers received monetary compensation for their participation in the Day Out of Time / Global Peace Day event. Instead, all involved “invested a part of their heart, due to their desire to transform our planetary culture into one of peace through culture and art,” according to a statement released by MayaPAN.

As Abril Barragán, who performed as the living statue, says, “I am not a theorist. I make art.” In this medium, she explains, she has found her way to disseminate a message of peace.

The Slow Food Movement in Mexico