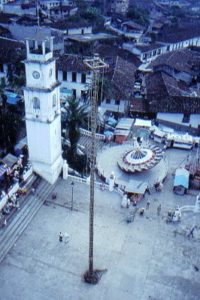 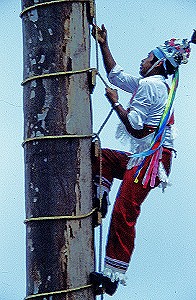 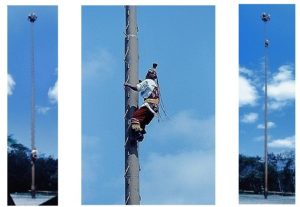 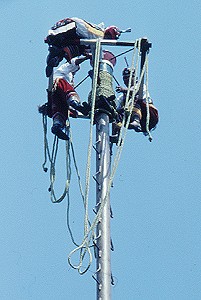 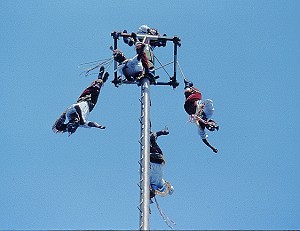 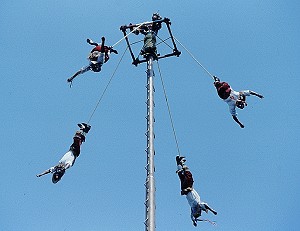 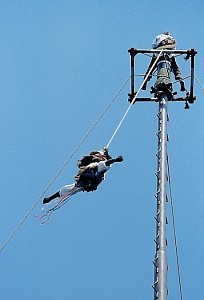 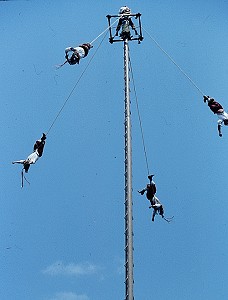 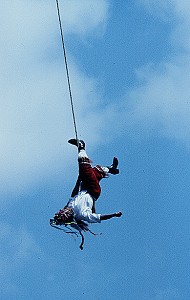 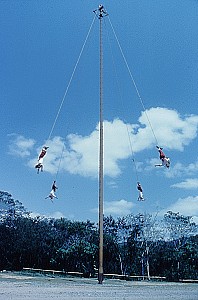 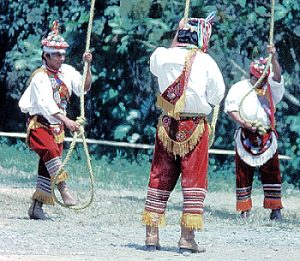 One of the most spectacular dances in the country — la Danza de Los Voladores, literally the Dance of the Flyers — involves only five participants.In the old days, they first had to find a suitable tree, as far away from women as possible, and then beg its pardon prior to chopping it down (see Frances Toor’s Treasury of Mexican Folkways). The resulting pole is some 30 meters (100 feet) long. A pit was then dug, and an offering of plants, animals and tobacco placed in the hole to ensure that the pole would be happy and not attempt to take the life of any dancer. The bottom of the pole was then lowered carefully into the pit, and the pole fixed precisely vertical, with a small square frame (which can rotate around the pole) at its top.

Climbing the pole looks like hard work. This pole (in Cuetzalan, Puebla, in 1984) was a traditional wooden one.

First, a musician ascends the pole and begins to play. Four dancers then ascend the pole and take up their positions on each side of the square, tying themselves to long ropes. All wear colorful costumes.

At the archaeological site of El Tajín, in 1983, a permanent steel pole had been erected for regular performances of the dance. The performers assemble atop the pole:

Up, up and further up…

The musician, balanced on the top of the pole while playing a whistle and banging a drum, suddenly stops playing and begins to rotate the square frame. The four dancers launch themselves backwards into space, …

…and as the frame continues to rotate, they “fly” upside down, their tethers lengthening with each rotation…

… gradually getting closer to the ground. Individual flyers strike characteristic poses as they descend:

The dance lasts only a few minutes, but it seems like longer:

They are almost back to ground level,

This dance is replete with symbolism. The four sides represent the four cardinal points, with the fifth person (the musician) located at the center of the universe. The dancers complete precisely 11 rotations before twisting themselves upright for the final couple of rotations prior to landing on the run. Four dancers times a total of 13 rotations equals 52, the number of years required for the two main calendars to coincide in pre-Hispanic times.

While the dance is thought to originate in this region, it is now performed as a tourist spectacle all over the country.

But, a final word of warning – do not try this dance at home! Apart from anything else, the coiling of the ropes is crucial… “Now, let me see, is it left over right, or right over left?…”