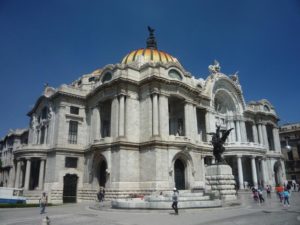 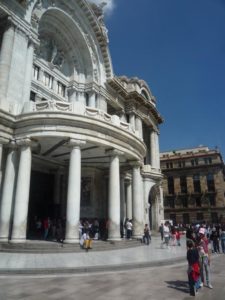 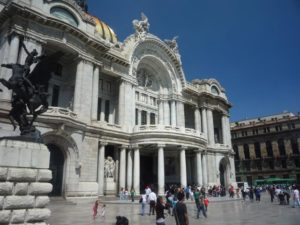 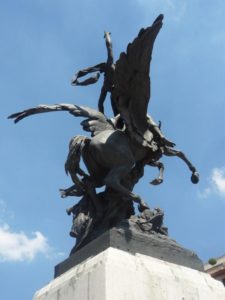 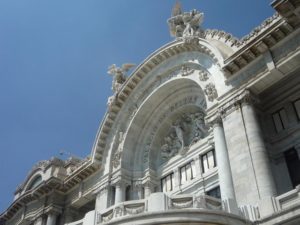 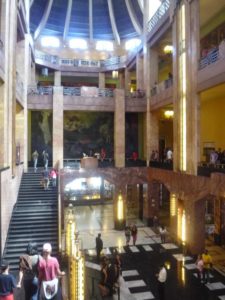 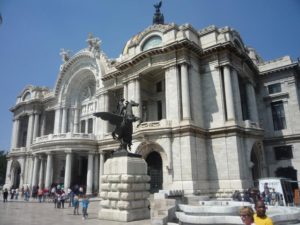 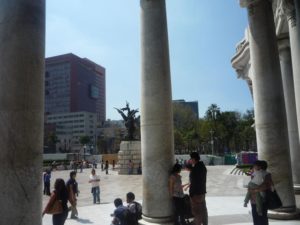 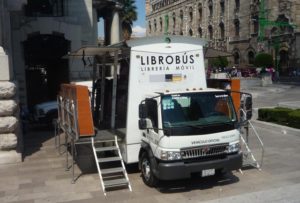 While perfect storms have been ravaging parts of America north of the Mexican border, Mexico itself — and especially Mexico City — is currently enjoying idyllic weather, a veritable Indian summer ahead of the approaching winter. For visitors to the capital, particularly the Centro Histórico, it is a delightful time to make the most of photo opportunities when one has a backdrop of bottle blue sky to frame downtown historical buildings.

The Palacio de Bellas Artes (Palace of Fine Arts) is one of Mexico City‘s great structures — and one of the most eminent buildings in all the country, or anywhere else — and an obvious favorite for this purpose. It is located beside Alameda Park, which is closed, along with the conveniently situated Bellas Artes metro station, due to extensive renovations. Bellas Artes is a stone’s throw from the General Post Office and Latin American Tower on Eje Central.

The Palace’s mix of architectural styles is predominated by Art Nouveau and Art Deco; matched by the afternoon’s cerulean canvas, it is a photographer’s paradise.

The Bellas Artes, like all great works of art, has had a tumultuous history.

A convent called Santa Isabel was first located here in 1680, although earlier Aztec relics have been found. The area was subject to flooding, and the sponge-like subsoil was to cause further problems (and continues to do so).

The convent was closed in 1860 as a result of the Reform Laws, and after various incarnations involving small factories and housing, the site was convened for the National Theater in the 19th century. This was a boon for the high culture establishment avidly supported by dictator Porfirio Díaz, to the detriment of most of the rest of the nation, especially the rural peasantry.

The theater was razed in 1901 when the grandiloquent Díaz decided to initiate a more ostentatious erection to mark celebrations for the Centennial of Mexican Independence in 1910. Italian architect Adamo Boari — who had designed the Palacio del Correo (the Post Office) across the road — got the job, and his plan was to pioneer neoclassical and art nouveau styles to the edifice.

While Díaz managed to lay the first stone in 1904, little work was done for another decade, as the political climate changed and the Revolution came to town. Boari packed up and went home and Díaz went into exile.

Construction finally resumed in 1932 under local architect Federico Mariscal, who by then favored the more in-vogue Art Deco style for the building’s interior. The edifice was completed and inaugurated in 1934.

The Instituto Nacional de Bellas Artes (National Institute of the Fine Arts) was created in 1946 to promote the arts and the Palacio became the Institute’s home.

Over the last century, the foundations have sunk four meters into that pesky subsoil.

The main façade facing Avenida Juárez is made of white Italian Carrara marble, with carved cherubs representing music and inspiration. There are four Pegasus sculptures by Catalan sculptor Agustí Querol Subirats situated in the front plaza. The roof covering the center of the building is made of crystal designed by Hungarian Géza Maróti, depicting the muses with Apollo.

The interior divides into three sections: the main hall with adjoining exhibit rooms, the theatre (which has a capacity of 1,000) and the Instituto Nacional de Bellas Artes offices — and it’s all also surfaced in Carrara marble. The third floor is occupied by the Museum of Architecture.

You can spend quite a bit of time studying Diego Rivera’s huge murals — “Carnaval de la Vida Mexicana” (Carnival of Mexican Life) and the controversial “El Hombre en el Cruce de Caminos” (Man at the Crossroads). Originally commissioned for New York’s Rockefeller Center in 1933, its wild socialist themes mortified John D. Rockefeller who had the work destroyed. Rivera re-did it back in Mexico. Other murals include David Alfaro Siqueiros’ “La Nueva Democracía (The New Democracy) and José Clemente Orozco’s La Katharsis” (Catharsis). Rufino Tamayo contributed with “México de Hoy” (Mexico Today), and “Nacimiento de la Nacionalidad” (Birth of Nationality), and there are more murals by other artists. Not surprisingly, the Bellas Artes was declared an artistic monument by UNESCO in 1987.

Music, dance, theatre and opera predominate. The best known regularly performing groups are the National Symphonic Orchestra and the Ballet Folklórico, which offers a heady spectacle of pre and post Hispanic dance.

The Museo del Palacio de Bellas Artes organizes the temporary exhibits of painting, sculpture and photography. Through November, 2012, the work of British artist Brian Nissen is featured. He lived in Mexico for 17 years during the 1960s and 1970s and enjoyed close creative links with such doyens of Mexican literature as Carlos Fuentes and Octavio Paz.

Some words of warning: if the Palacio Bellas Artes is a magnet for tourists, it also attracts all kinds of sleazy opportunists who attach themselves to tourists. No one who approaches you and tries speaking in English to tender this or that service — even kindly offering to take your photo — is likely to be anything other than a shark. Beware.

Photography (without flash) is permitted only after you have paid a 30-peso stipend downstairs. Of course, photography outside at the Palacio is still free. 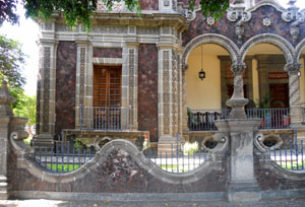 The Zuno house in Guadalajara, Mexico is doubly ‘historic’