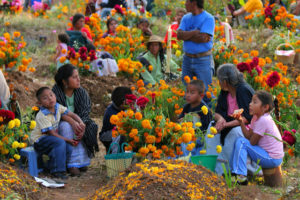 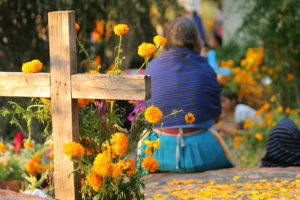 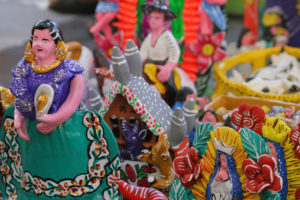 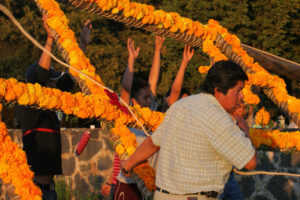 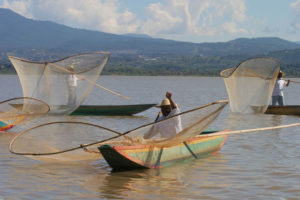 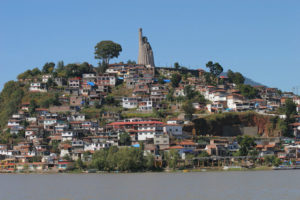 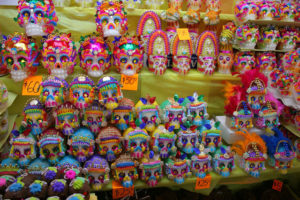 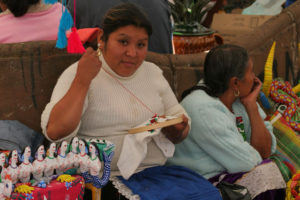 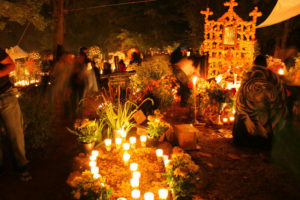 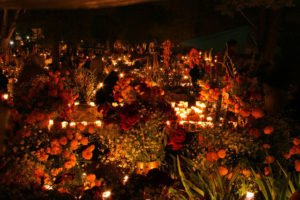 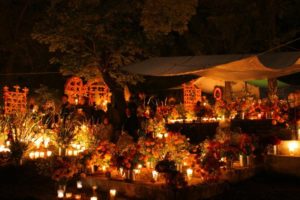 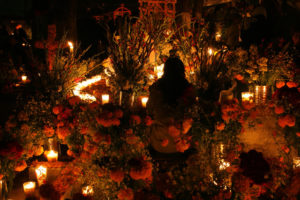 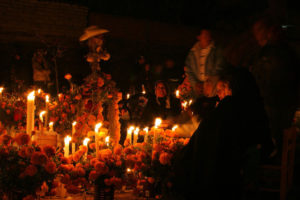 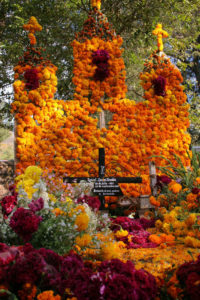 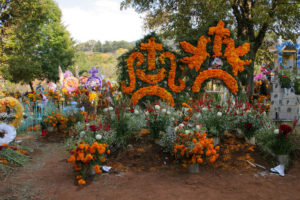 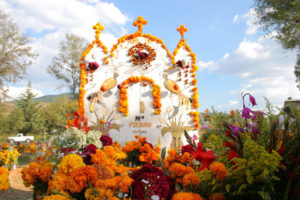 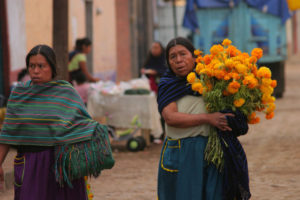 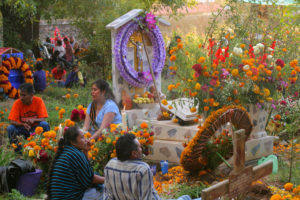 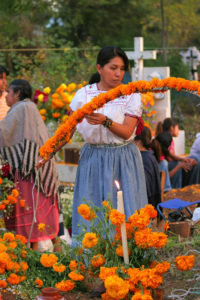 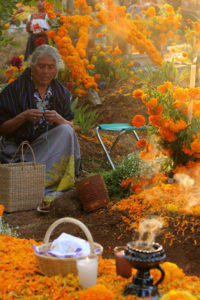 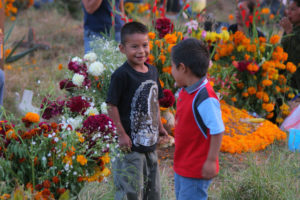 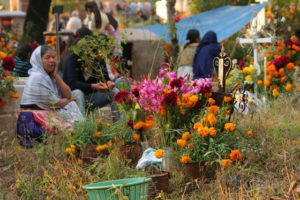 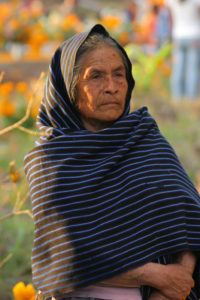 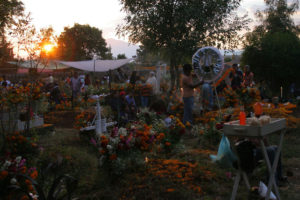 In Mexico, Day of the Dead – Día de Muertos – is a spiritual, intense vigil connecting the souls of the living and dead.

Over the past decade, increasing numbers of tourists have been drawn to Mexico to experience the event for themselves. This has brought the traditional indigenous observance into the international spotlight and has led to overcrowding of provinces such as Michoacán where the most “authentic” all-night vigils are held. The celebration is transforming into a drunken fiesta with endless camera flashes and shutters clicking away. What has this meant to families who have been observing this event for years? Will the traditions stay alive?

The Día de Muertos is celebrated primarily on November 1 – All Saints Day- and November 2 – All Souls Day. Generally, the 1st is to mourn children who have passed away, and the 2nd is for adults. The whole country is geared up with festivities. Special sweets and treats line entire market stalls with colorful sugar skeletons and coffins by the thousands spilling out into view. Michoacan state has a large Purepecha population. A fierce people that the Aztecs never fully conquered, they retain the traditions of the Día de Muertos, particularly in towns and villages near Lake Pátzcuaro.

In Morelia, the capital of Michoacán state, the Día de Muertos is quickly evolving into a tourist attraction, complete with Halloween costumes. Josué Casillas, founder of Pehualli Ecotourism and Adventure, speaks of the positive and negative effects of tourism in the area.

“Morelia has a lot more infrastructure now and tourism has helped many families in the indigenous communities receive more income. Unfortunately, many people that visit the cemeteries barely respect the people or their beliefs, especially on the Island of Janitzio where thousands of people visit the very small cemetery. As a result of excessive tourism, and visitors who drink and party, many families have stopped going out during that night. Fortunately, there is still hope for the traditions because there are places where the customs are still intact and it will remain like this because the tourism that reaches those places is more respectful of the tradition of the locals.”

Casillas takes a small group each year to handpicked locations around the lake – this year he plans to take a small van of tourists to a Purepecha music festival in Jarácuaro, Arocutín with its small cemetery, and a few houses in Santa Fe de la Laguna.

The market in Pátzcuaro on November 1 is spectacular. People from villages all around the lake spend the whole year preparing crafts and goods to sell during this week, coming into Pátzcuaro to offer their wares to tourists and locals alike. For them, Día de Muertos becoming commercialized is a good thing. Their excellent craftsmanship, passed down for centuries, is now gaining more attention, and their meager incomes are supplemented while they preserve their ancient traditions. Wandering through the aisles, Purepecha women with fluorescent clothing and braided hair weave their way through crowds of wide-eyed tourists with giant cameras. A woman painting miniature figurines next to her stall says that, until recent years, it was impossible to survive by making craft items. But now, she doesn’t have to worry as much because in the weeks leading up to the Día de Muertos, she is able to sell more of her crafts and each family member generates enough income to make the rest of the year much easier.

The Isla de Janitzio has long been famous for its midnight vigil. It is the star attraction on the night of November 1, when hundreds of candlelit boats arrive. The passengers, carrying candles, then walk the whole way up the island to the cemetery. During the daytime, we take a small boat from the nearest town, Uranden, to approach the tiny island with the enormous Morelos statue. Local fishermen serenade us, demonstrating the traditional way of fishing and sailing. It’s all a show; most of these boats now have motors. The fishermen they sit around waiting for tourists to approach the island, motor their way over and shut them off to present their spectacle. Again, the consensus is that the increased tourism is healthy, as Janitzio’s residents are able to generate more income. On the island itself, food vendors and souvenir stalls selling cheap-looking trinkets bombard visitors. It is difficult to imagine that people experience serenity and spirituality here. It is easy to understand why families have changed their traditions to avoid the tourists.

In the evening in Cuchuchuco, men from the village are setting up the ofrendas. There are no tourists there and shy smiles are exchanged. This pueblo is too small and insignificant for tourists to visit. Townspeople didn’t mind; this way they were able to spend the night with their muertos – the spirits of their deceased loved ones. On Isla Pacanda, another island in Lake Pátzcuaro, we pay our respects to a family who lost their son the previous year. They have set up an altar in their home, and have spent the day preparing tamales and soup for guests who will come to honor their son.

Wanting to avoid overcrowded places but not willing to miss out on the spectacles, we next visit Tzintzuntzan. Even taking a back entrance into town, we hit heavy traffic and decide it is better to park and walk to the main panteón. The two cemeteries are magnificent; thousands of candles aglow light up the faces of families huddled in blankets eating with, talking to, and simply being with their deceased loved ones. The ornate offerings and elaborate displays have obviously taken weeks to prepare.

It is still early, but already the other side of the tourism is starting. Groups of tourists arrive with bottles of tequila and mescal, laughing and making lots of noise. There seem to be two parallel worlds existing in the same moment. A family attending to the tomb of their son who died four years earlier shares their thoughts.

“Every year there are more and more tourists. They’re not coming to see our tradition, they just want another reason to have a fiesta. It gets worse later, when they start urinating on the candles.”

When asked if they would still continue to carry on this tradition despite the negative effects of tourism, they said they will. But more and more families are bringing the tradition into their own homes. More emphasis is placed on the days leading up to the Día de Muertos and, rather than doing everything on the “big night,” families are focusing on the following days as well.

After visiting Jarácuaro with its traditional Purepecha music and dance festival, we arrive in Arocutín – well past 4 a.m. By this time, the crowds are dwindling or inebriated and going elsewhere to continue their parties. As we climb up windy lanes, the small cemetery emerges, the area in front of the crooked church ablaze with candles. A few dozen families are congregated around their tombstones. The real energy of the Día de Muertos takes over. Food is passed around, conversations abound detailing funny events, unforgettable memories, and contentment at being with the dead spirits. A Purepecha man attending his father’s grave waves me over and gives me a blanket; these pre-dawn hours are chilly all year round. He explains that to him, Día de Muertos is just another part of life; it is their way of conquering death, by bringing back their dead loved ones each year.

On November 2, the lake is eerily quiet. After returning to Tzintzuntzan to see the ofrendas in the daylight, we continue to Santa Fe de la Laguna, a small pueblo reputed to be one of the most closed in the lake area. We enter the village and there is no one around. The sight at the panteón is surreal. Extended families congregate around the ofrendas, wisps of smoke rising, blending with the mountain background. Children play, fruit is distributed to all, including tourists, and the pure joy and celebration of being with the loved ones you have lost envelops everything.

The Día de Muertos has undoubtedly changed, and will continue to do so with the growing influence of globalization and tourism. However, we can rest assured that no matter how commercialized it appears or how overcrowded the cemeteries become, the essential spirit of the event is as intact as ever and will stay that way. When sought in the right places, the customs and traditions will be able to be found for many more years to come. 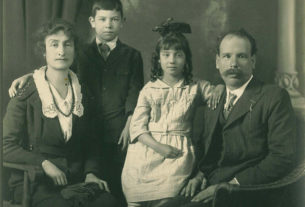 Discovering Clues to the Legacy of a Mexican Poet: Manuel Rocha y Chabre 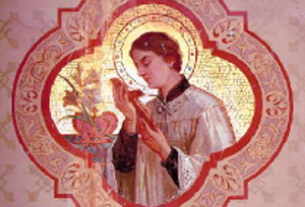