There is absolutely no place in this world or any other quite like Mexico City. I don’t quite understand why so many people avoid it. One of these days, whenever I can get together enough money or land that job I’m looking at, I expect to live there. Again.

My first recollections of Mexico City go back to 1992. I had signed up with an undergraduate study abroad program through the University of Maryland through which students could enroll in courses at the Universidad Nacional Autonoma de Mexico. Each semester a group would form and fly into Mexico City with one of the professors from the University of Maryland for a week of orientation and preparation for the semester to come. So in August 1992, a bunch of Maryland students caught a plane to the Benito Jaurez International Airport where they would meet up with the professor, who arrived a bit early to prepare the way. I, of course, was not on that plane.

Instead, I had taken the summer to study at a language school in Quetzaltenango, Guatemala. My plan was to meet up with the group a few months later in Mexico City. So I packed my bicycle, a few belongings, and my one-way ticket onto a plane headed for Guatemala City. I would soon learn that even this far away, Mexico City loomed large. Mexico’s soccer leagues played on the Mexican TV channels which dominated the cable television system here. Locals referred to huge Aztec Stadium in southern Mexico City as la Azteca.

After the language course, I headed north. In Tapachula, I packed bicycle and belongings onto the express bus to Mexico City. Then, I sat back for the long ride. Twenty-four hours later – the usual twenty hour trip was augmented by a brief hiatus when the bus driver drove the bus off the narrow road into a tropical ditch – I arrived at the TAPO bus depot and unloaded bike and belongings. I hoped mine would be a brief and uneventful trip to the hotel where all the other students were staying for the week. First, the map. It seemed that the quickest route was across town along Republica de Cuba followed by a short jump down Reforma to a collection of streets named after European cities. Versailles it was. There was even a metro stop nearby, so I had a landmark. Off I went, pedaling happily through the pea-soup smog.

My first impressions reminded me of my first trip to New York City: big busy streets flagged by buses and taxis and flanked by an endless stream of pedestrians. The only difference was in the buildings. Where New York skyscrapers force you crane your head back to catch a glimpse of the sky above, Mexico City’s buildings hunch down to peer at you. I almost felt like I could bunny-hop over any one of them, if only I could avoid the stern reprimands of the matronly buildings who surely would disapprove of such behavior.

The map was simple enough. It showed just a few streets and apparently easy connections between them. Unfortunately the city would not be contained by such simplicity. I would learn later that Mexico City is based on a standard grid pattern, criss-crossed with diagonals, juxtaposed with small residential streets and dead-ends, cross-hashed with a system of Ejes Viales, and circumscribed by a beltway that now lies mere dozens of kilometers inside the city’s edge. While that would all eventually make sense – you gain new insights into organized chaos after living in Mexico City for a while – at the time, I was just lost. With no sun visible through the smog to orient me, I asked someone to point me me east. I would learn later that the good directions I received were mere chance, but soon enough I was pedaling along Republica de Cuba. The map showed that the street connected directly to Reforma, and from there, I should find Versailles easily.

Just one problem though – Republica de Cuba hit a dead-end unexpectedly, a few kilometers from its supposed intersection with Reforma. What’s worse, the cross streets at the time ran into heavy road and building construction and several more dead-ends. For a while, I was turning circles trying to maintain a constant direction roughly south and east. I eventually made my way to a major highway and asked for directions to Versailles from a taxi driver stopped alongside me at a traffic light. He didn’t know, so I asked him how to get to Reforma. ” Aqui estas,” he said. Several blocks later, I found the rare street sign that confirmed my location. I was on my way.

I turned off Reforma near what I would later learn was the Zona Rosa. After making three or four circles around the neighborhood, I finally found my street. Checking the street numbers, I noticed that they went down to the left and up to the right, or something like that. I don’t recall the exact details, but let’s say I was at about 100 and needed to get to 200 or 300 block. So I went right. A couple of blocks later, the 100 numbers gave way to 400 numbers, skipping 200 and 300 altogether. Then, the numbers dropped into the teens, and the street ended. Turning back, I learned another of the lessons of Mexico City: there is little organization of numbering systems even along the same street. Individual blocks might be in order, but things can change block-to-block, seemingly at random.

I finally found the hotel. Entering, I asked the incredulous attendant where to park my bicycle during my stay. They found room in a storage area, so I checked in, left my bicycle, and walked up the small flight of stairs to the dining room, where the other students had just sat down to a late lunch. Over the next several months, I would slowly begin to make some sense of the town and its relationship to the rest of the country around it.

Over time, I would learn that each section of Mexico City is just a town; they’ve all simply grown together over the years into a huge, chaotic conglomerate. Within that chaos, however, a certain order reigns, controlled not so much by planning or statute as by the competing forces of overlapping entropy. It can take a bit to get used to, but once the initial disorientation passes, it is possible, even enjoyable, to settle into the city. Even the smog can be dealt with by staying informed of the conditions outside and staying inside when things get bad.

Now, it might be easy to dismiss the opinion of anyone crazy enough to pedal a bicycle through the streets of Mexico City. Still, too many people get into and immediately out of el D.F. without so much as hanging a hat on a hook at a local hotel or sampling the comida corrida sold at the comedores in Xochimilco. Not everyone will agree with me about the sheer fun that is cycling south along Insurgentes on a Sunday morning when traffic is low. But Mexico City deserves a look by even those most anxious to get Old Mexico precisely because Mexico City is the oldest Mexico. The Aztecs, or Mexica, arrived here, seeing an eagle perched on a cactus with a snake in its beak in the middle of a lake. They took this as a sign and founded the mythological Mexican nation a hundred years before the Spanish ever arrived and four hundred years before the first gringo aventureros came along. Not only does this myth form the core of Mexican national identity, it has been borrowed and re-worked by northerners, thus emanating out into the US Southwest, where Chicano culture places the mythological Aztlan as the original home of the Mexica before they went searching for the eagle.

To the south also, Mexico City weighs large. All roads eventually wind up at the capital. Just inside the Guatemalan border, a sign along the coastal road out of Tapachula marks the distance, not to Mexico City or Mexico D.F., but simply to “Mexico”. And that’s 1200 kilometers away. While it’s hard to dismiss the distant giant when its pollution causes acid rain that deteriorates the nearby Mayan ruins in the Lacandon Rain Forest, that sign and ones like it have been around since Carlos Fuentes described Mexico City as La region mas transparente ( Up Where the Air is Clear) decades ago. Provincial residents here curse the centralized bureaucracy that eats up their tax dollars, but they send their kids to live with relatives in la Ciudad so they can attend school.

Mexico City is the original metropoli – or political, economic, and cultural center – of the Americas. The rest of Mexico emanates out and reflects back in. Having swallowed up once quaint villages like Coyoacan and San Angel to the point where it now includes extensive nopal (prickly-pear cactus) farms within its municipal jurisdiction, Mexico City is essentially a microcosm of the rest of Mexico. The very nature of the Mexican nation and its people is resolved here. 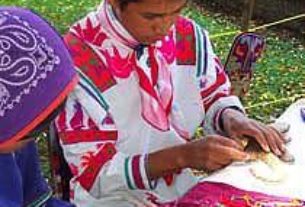 Care and maintenance of the fireplace