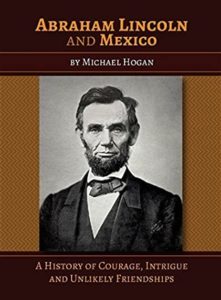 The United States and Mexico struggled through volatile years of suffering and carnage to become unified nations. Michael Hogan’s thoroughly researched and passionately written Abraham Lincoln and Mexico is a thought-provoking read that covers part of that struggle from 1822, when Americans settlers first arrived on Mexican territory, to 1867, when Mexico finally freed itself from France’s intrusion into its territory.

This well-documented historical work brings to light much that has been hidden from the public, and has proven to be a loss for the American public. As Edmund Burke, a British parliamentarian in favour of the States during the American Revolution warned: “Those who don’t know history are doomed to repeat it.” His words were an admonishment that should have been viewed with more gravity. Abraham Lincoln and Mexico unveils the raw, unsanitized and thoroughly documented work into the government’s manipulation of the public as well as the hidden agenda of much of Congress at the time of the Mexican-American War that has, for the most part, been hidden from the American people. President Polk’s persistent and cynical disinformation reads identical to the political and public manipulation that went on before America’s entry into the Vietnam War and later, Iraq. For this alone, Hogan’s book is timely and relevant. And as Mexican immigration is a long-running story in American politics, perhaps his honest depiction of the Mexican-American War might give a more compassionate perspective to the present problem of undocumented Mexicans.

In the third grade I was taught about “spheres of influence.” The premise was based on the fact that we Americans were a noble and generous people, far superior to other cultures. It was our duty to enter other countries to upgrade them and teach them a better way of living and governing. As a byproduct of our superiority, I was made to believe enlightened people only spoke English.

Imagine my shock to learn history from the perspective of another country – a perspective I would have never had, had I not emigrated to Mexico in the sixties and found employment teaching history to a class of bilingual high school students. I learned for the first time the cynical and abusive intent of the Mexican-American War. It was a sobering awakening. When I tried to relay this new perspective to my American family, I was met with disbelief and taunts of being brain-washed by a foreign culture. Where was my proof? All I had was a Mexican school book to back up my story. With Michael Hogan’s research into documents brought to light for the first time, I no longer have to defend Mexico on “hearsay.”

The true story behind the war had been so well hidden – though in full view for anyone taking the time to read the documents – that even the recent film on Abraham Lincoln, who vehemently opposed the war on moral grounds, didn’t give it a mention. Yet Lincoln’s stand against this cruel and predatory war was as courageous and forthright as his views on slavery. Hogan’s book corrects the oversight, and gives a lucid and objective insight of how a people can be manipulated by its government, and how even within its governmental branches, checks and balances don’t always work. His book is not a personal point of view though it’s clear where his sympathies lie. Its power lies in the fact that the documents themselves hold the story with no need of interpretation. In fact, almost half the book is a bibliography of information garnered in his research.

Congress never sanctioned the Mexican-American War. Once the war was underway with American soldiers in harm’s way, Congress had no choice but to support the soldiers under attack. Hogan writes “To most Americans, failure to support the soldiers now that they have been sent to Mexico would be nothing short of treason, regardless of one’s personal feelings about the righteousness of the American cause.” That line of reasoning sounds depressingly familiar. In truth, the Mexican-American war was a greedy land grab for private interests and an expansionist desire to control all land from the East to the West coast.  It was started under deliberate misinformation perpetrated by President James K. Polk on May 13, 1846, who knew full well the game he was playing. Misinformation continues as American history books and websites continue to spread the myth that Congress declared war, an act that belongs to Congress, but it never happened.

“From the beginning,” states Hogan, “Lincoln was critical of those who advocated adding Texas as a state. He saw it both as an unnecessary provocation to Mexico and a move by slave owners and their democratic representatives in Congress to create another slave state, thus disturbing the very fragile equilibrium between slave and free states in the Union.” Once Lincoln took his seat in Congress in 1847, he exposed Polk’s premises as false and stated in a point-by-point argument that the war was “unjust and rapacious.” He continued to take the moral high ground and was maligned for it. Yet, historians have selected statements out of context to give an entirely different picture of Lincoln’s views on the war. Hogan’s contribution to American history has been to do extensive research to place Lincoln’s involvement in context and bring to light what, giving the benefit of the doubt, might have been lazy research by earlier historians.

In losing sight of the immoral justification for the war, it is easy to gloss over the fact that the American government expropriated about one-half of Mexico to carve out Texas, Nevada, Utah and California as well as parts of Colorado, Wyoming, Nebraska and Oklahoma. This land grab helped impoverish Mexico by appropriating most of its wealth. The Mexican-American War, fought a little more than 170 years ago, is not a distant wound for the Mexican people. In light of its history, it would be morally just to nuance the extreme position of various government officials as well as segments of the public on deporting Mexican aliens.

It’s interesting to note that when the American Civil War ended in 1865, Generals Grant and Sheridan, encouraged by President Lincoln, went to Mexico to fight on the side of the Mexicans against the French occupation. Even before the end of the Civil War the American government was already sending supplies and weapons to Mexico. Grant wrote in his memoir that the Mexican-American War was the most unjust war ever waged even though he did his duty. His engagement in the Franco-Mexican War was a way of seeking redemption. Many freed blacks as well as Union soldiers who considered the Mexican-American War an unjustified bloodbath, joined the fight against the French. Many stayed and were honoured as heroes by the Mexican government. George Earl Church was one such soldier who became President Juarez’s Minister of War and is buried in Mexico.

Michael Hogan’s Abraham Lincoln and Mexico is well-documented and precisely written with ample proof of President Polk’s brilliant strategy that manipulated the American people into a bloody war against a peaceful nation. Even the tenuous bringing in of Lincoln’s involvement as a moral witness during the French invasion of Mexico has its place. But then Hogan veers away from American history to give an in-depth account of the French occupation of Mexico between 1861 and 1867. Its only tie to the Mexican-American War is the continuing moral angst of Americans who opposed the war, then fought in the Civil War and later went to fight in Mexico against the French. The Mexican-American War was fought between 1846 and 1848; the Franco-Mexican War, between 1861 and 1867. It’s interesting material but the back story involves Europe with its own trajectory of events. Most wars have their seeds in the war that was fought before. The Mexican-American War may have weakened Mexico to the point of France’s gaining entry to the country, but to connect these two wars is a stretch. Essentially, the book is composed of two essays – one on the Mexican-American War and one on the French occupation of Mexico. The American Civil War is briefly discussed in Hogan’s book and serves as a liaison between the two. Lincoln didn’t live long enough to be fully involved in Mexico’s war. His main preoccupation was with the American Civil War, though there is no doubt he had sympathy for the Mexican people and supported their war effort against the French. His death in 1865 was two years before the Franco-Mexican War ended.

Half of Michael Hogan’s 332-page book consists of archival documents. With so much misleading information written about the Mexican-American War, Hogan had no choice but to include a lengthy appendix. A lie repeated often enough gets sucked into people’s minds as truth, and the burden of proof rests on the lone voice that shouts, “The Emperor has no clothes.” I missed not having a time line to refer to in the book. The nineteenth century was a turbulent period in American and Mexican history, and a time line would have been a useful aid for keeping events in their sequential order. Still, for anyone interested in American history or how the game of politics is played, it’s an enlightening read. 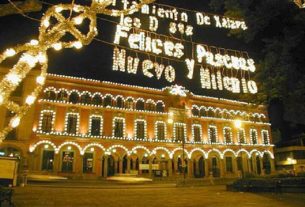 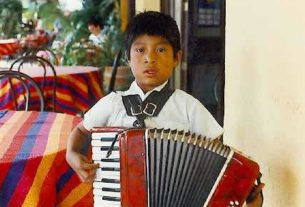