The Romans coined the phrase Omne vivum ex ovo, “All life comes from an egg.” The egg is a universal symbol of birth and resurrection, employed in burial practices of the ancient Egyptians and Greeks, and eventually adopted by Christians in the second century in conjunction with the celebration of Easter.

Though brightly colored eggs remain a traditional Easter element in many countries, they do not figure prominently into the celebration of Pascua (Easter), one of Mexico’s most important and solemn religious holidays. Curiously, however, eggs–in the guise of cascarones– are a popular feature of Carnaval (Mardi Gras), which marks the opposite end of the Easter season, as well as a variety of other Mexican festivities.

In their most common form, cascarones are empty egg shells that have been washed out, painted on the exterior, filled with confetti and closed again with a small square of tissue paper pasted over the opening. They may sometimes contain small toy prizes or sweets as well. Early variations, connected with the customarily riotous pre-Lenten celebrations, were filled with either perfumed or rank-smelling colored water and sealed with a plug of wax.

Cascarones figure heavily into local fiestas in towns and cities all over the nation, as fellow revelers enjoy playfully cracking the eggs over one another’s heads, unleashing showers of confetti that help heighten the sense of merriment. The practice has long been favored among adolescents who still may be observed engaging in this innocent form of flirtation with members of the opposite sex during Sunday evening paseos around village plazas.

According to some sources, cascarones first came into vogue in the 19th century, when Empress Carlotta introduced a popular European courting custom to Mexico. Turn-of-the-century accountants of Carnaval in Mazatlan make reference to the papaqui, simulated battles in which rival labor groups pelted one another with cascarones, thereby setting the tone for the unconstrained Farewell to Flesh festivities.

The term papaqui is also applied to confetti egg smashing free-for-alls that make up part of many festivities in the Lake Chapala region. It is a traditional feature of many wedding receptions and invariably marks the highlight of the Fiesta de San Sebastian, a colorful day-long block party celebrated January 20 in an upper Ajijic neighborhood.

Traditional or not, cascarones lend themselves for Easter egg hunts, or even the creation of a colorful Easter dinner centerpiece. Consider passing them out among the guests at any private social gathering– the papaqui is a sure-fire measure to help break the ice.

Cascarones are easy enough to make on your own, but why bother when you can purchase them by the dozen for just a few pesos from vendors who set up shop on local plazas nearly every day of the week. Just don’t make the mistake this writer once made in traveling north of the border for the Easter holidays. The cardboard egg crate filled with cascacarones I had wrapped up as a touch-of-Mexico gift for my young nieces and nephews ended up in the hands of disapproving U.S. Customs officers!

(This article originally appeared in the April 22, 2000 issue of the Guadalajara Reporter and is reproduced by MexConnect with kind permission of the author.) 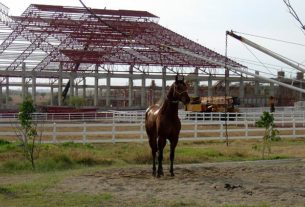