We are traveling to Mazatlan for Christmas this year and would love to sample some good Mexican wines. Can anyone supply us with the names of some good reds and whites?

Try L.A.Cetto, from Baja California. The owner of an Italian restaurant in San Carlos, Sonora, recommended this brand to us and said it was the only wine she bought whose quality was consistent. We have enjoyed them very much.

The best Mexican wine label, by general reputation and by my humble opinion, is Monte Xanic. Its cheapest wine is a decent white called Vina Kristal. If you want to try the good stuff, try to splurge a bit on their cabernet or merlot or the like. I had one with a meal at Las Mananitas in Cuernavaca, which helped (he grinned). I had a 250-peso bottle of a Santo Tomas sauvignon blanc in Ensenada (where the winery is based) last week, but it was mediocre. Perhaps it was just an off bottle. Domecq and some other Mexican wineries lately have been producing premium labels, with premium prices. They generally strike me as good, but not great wines and they generally seem to be significantly more expensive than Chilean or Spanish wines of comparable quality. It’s difficult to find a good selection of California wines in Mexico City (though there are a few places, notably one in Polanco). At the bottom end you have jug wines such as Padre Kino. The quality of the wines has improved greatly in recent years, in general. I’ve been wanting to have a tasting party of Mexican wines at some point. I’d love to know what you think of the wines you try when you come down. Let us know. Salud!

Probably the best information on the subject that I’ve seen in a long time is from the archives of Mexconnect at:Exploring Mexican Wine

I have been told by a couple people that Mexico is generaly not known for it’s wine production. (I was told the same of Mexican cigars, and I love them!)

We will be visiting the coast soon, and I would like to taste for myself, any recomendations would be greatly appreciated, also the peso amount too if you know.

I prefer a white, fruitful, yet not sweet but refreshing.

Mexican wines have improved dramatically in recent years. Most used to be really awful.

Most are still overpriced in relation to Chilean wines available locally (though the price of chilean wines is going up).

I had a very good, fruity Zinfandel-Cabernet blend last night by Flor de Guadalupe. Not terribly complex, but nice. (Good restaurant too: La Sabia Virtud on Tamaulipas in the Condesa in Mexico City).

An excellent, but costly brand of Mexican wine is Monte Xanic. The cheapest wine they make, Vina Kristal, is a pretty good white.

One varietal in particular caught my attention: I remarked to the staff at the cellar in Enseanda that the Petit Sirah was excellent. They nodded their heads. Of course it was, as I learned later, it had won an international award. Valle de Santo Tomas.

I guess you mean the Baja (West) coast, not the Tropical Pacific Coast, or Gulf Coast or Caribbean Coast, not that it matters for this question, though you might be interested in knowing that Baja California, like (Alta) California has a good Mediterranean type climate favoring wines.

My favorite wine actually fits your description nicely, It is called Blanc de Blancs, I recall it is from Baja California, it is available throughout all the north of Mexico in Supermarkets (hope that is not a negative). I really do like it enough to bring one to the US everyy time. It is inexpensive, we are talking probably around $6.50 (65 pesos) or something similar, and the price has doubled over the last 3.5 years. It is from one of the leading volume Baja wineries (name escapes me at the moment, something like San Xavier but that’s wrong), hey it’s great, wish I had some right now…

Re: Blanc de Blancs, I was wrong about the name of the manufacturer, it is produced by Pedro Domenq, who I just learned after a search on the internet https://www.domecq.com.mx/ also:
Kahlúa
Brandy Presidente
Brandy Don Pedro
Sauza
Ballantine’s

I just returned yesterday from the city of Guanajuato where I bought a red wine called Los Reyes, 1999 vintage, made by Domecq. I’d say it’s a good, tasty red table wine, and it cost me 40 or 45 pesos. 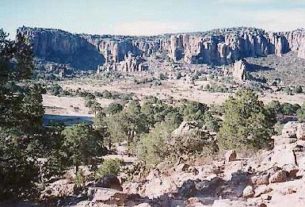 Hats off to Sombrerete in the state of Zacatecas

The Power and the Glory by Graham Greene