If Michoacan is “the soul of Mexico,” as it has often been called, then its food is Mexico’s soul food, for few other places in the country can claim such a profound and long-lasting indigenous influence on their regional cuisine. This western state, part of the Bajio region located north and west of Mexico City, has retained its culinary roots for over a millennium.

To understand how this happened is to realize the strength and unity of the Purépecha (sometimes called Tarascan) people that inhabit a large portion of the state. An astounding 38 different indigenous languages are spoken in Michoacan, including Purépecha, Mazahua, Náhuatl and Otomí, but the oldest continuous civilization here is that of the Purépecha, dating back 1,000 years.

Said by some to have come from the southeastern part of what is now the United States and by others to have migrated from Peru (because of linguistic similarities) the group arrived near the modern day town of Zacapan, where the Festival de La Raza Purépecha still takes place annually. The sense of tribal identity is so ingrained in the Purépecha people that they have their own flag, with four colors representing the four parts of Michoacan where they predominate: the Meseta Purépecha (the central plateau), the Lacustre region around Lake Patzcuaro, the Cienega (wetlands) of Zacapan in the north and the Cañada de Once Pueblos – the Gorge of Eleven Towns.

The pre-Hispanic inhabitants flourished in part because of the natural resources found in Michoacan. Its name, meaning “Land of Fishermen”, derives from the fact that the state boasts a vast network of rivers and lakes. These, along with the forests, seacoasts and abundant vegetation, provided sustenance for these hunter-gatherers. Fishing, hunting and gathering wild berries and fruit were complemented by the cultivation of corn, beans and squash.

Thanks to the strong indigenous influence, perhaps no other area of Mexico has quite as many versions of corn-based dishes as does Michoacan. Atole, a corn gruel drink found all over the country, is made here with a wide variety of ingredients used to flavor it, including tamarind, blackberry, toasted corn silk, cascabel chile and herbs.

Tamales, too, come in many guises. Those filled with meat and chile, which most resemble tamales found in other parts of Mexico, are called nacatamales. Those that use corn boiled with wood ash instead of cal (the calcium oxide normally used to soften corn) are the folded polyhedrons called corundas, and when beans are incorporated, they are called chakikurindas. The latter are nearly unchanged from their pre-Hispanic predecessors, which were served to the Cazonci, the indigenous nobility, at wedding feasts. Another regional tamal is the uchepo, made with fresh, rather than dried, corn and served bathed with cream or as an accompaniment to stews.

Corundas and uchepos are frequently served along with churipo, a meat-based stew typical of the Bajio in that it is flavored with xoconostle, the fruit of the nopal cactus. Another local stew, resembling a hominy and bean mixture, is the frequently meatless máshkuta. The hominy dish pozole, widely popular in Mexico, is said to have originated in Michoacan and most certainly in the western part of the country.

This corn-based diet was enriched, rather than supplanted, by the introduction of foods brought by the Spaniards. Spices, rice and pork, among others, have all influenced the cuisine of Michoacan. The rice and chorizo dish called morisqueta is among the state’s most famous, as are carnitas, the deep-fried pork chunks that are now served all over the country, usually touted as “auténticos de michoacan.” Pollo Placero, the chicken dish originally served in the plazas of Michoacan’s Spanish colonial cities, is served with carrots, potatoes and enchiladas bathed in a rich, yet mild, chile sauce.

Another Spanish innovation was the planting of wheat, which has taken on special meaning in Michoacan as part of the ritual offerings made on special days, such as the Day of the Dead, when pan de muertos is placed on family altars, and traditional weddings, where bread symbolizes fertility. Also popular are aguacates – bread loaves shaped like avocados- and empanadas, pastries filled with chilacayote, the Mexican squash resembling a giant, round zucchini and used as the base for many sweets and aguas frescas.

Any mention of sweets calls to mind the proliferation of sugar-based specialties in Michoacan, especially in the Colonial cities. The arrival of sugar cane gave rise to an enormous variety of desserts in this region. The fruit jellies called ates are a specialty of Morelia, and many milk-based sweets, most notably chongos zamoranos, originated in Zamora. Helados Michoacanos, the ice-cream stores found throughout the country, began in Tocumbo, where enterprising ice-cream makers developed a community business that eventually involved natives of that village venturing out to establish branches in nearly every city and town in Mexico.

Just as Tocumbo is associated with ice-cream, the town of Cotija is associated with cheese and gives its name to the hard, crumbly cheese called queso cotija that garnishes everything from taquitos to enchiladas. Frequently accompanying these tortilla-based dishes with their salty cheese toppings is the beverage charanda, sometimes called “Michoacan’s mescal”, or sende, made with fermented corn.

In fact, nearly every town and its surrounding region is known for a culinary specialty or agricultural product. Uruapan’s avocados and macadamias, Pátzcuaro’s whitefish, Apatzingan’s pork, rice and melons, and the seafood of the area around Lazaro Cardenas are only a few of the gastronomic wonders of Michoacan. Although a trip to this state is rewarding for its natural beauty and artistic handcrafts, as well as its cuisine, a taste of Michoacan can be sampled, without leaving home, through the following recipes. 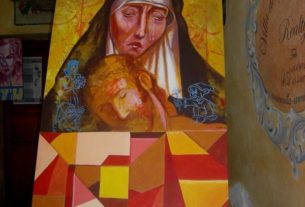