The rich, yellow-green pulp of the avocado, nowadays most frequently associated with the ubiquitous Mexican dish known as guacamole, was once an appetizing mouthful for the mastodons that roamed the American continent, spreading the seeds of the fruit they swallowed whole. Thus the avocado tree, a native of the Tehuacan Valley of Southern Mexico, whose seeds have been found in archeological ruins dating back to 8,000 BC, had spread as far north as the Rio Grande Valley and as far south as Peru by the time the Europeans arrived in the New World.

Evidently, the mastodons were not the only ones with a taste for the velvety flesh of persea americana, because by 6,000 BC the inhabitants of Tehuacan were cultivating the fruit, resulting in a larger size and an oval, rather than round, seed shape. Having gone through these initial changes, the avocado continues to expand its botanical horizons, and today there are over 1,000 varieties, including a seedless one recently discovered in Costa Rica.

Although most often used as a vegetable in salads, soups and appetizers, the avocado is a fruit and, more specifically, a single-seed berry. (Botanically, fleshy fruits fall into one of two classes, druses and berries, the former having stony seeds, such as those found in peaches, and the latter having softer seeds.) Unlike other fruit, the avocado never ripens until picked, and may remain on the tree as long as sixteen months. Considering that one tree can produce up to 400 pieces of fruit, avocados are a high-yield crop and Mexico, with its year- long mild climate, is the world’s largest avocado producer. The state of Michoacan leads all others in production and exportation.

Despite the proliferation of avocados in Mexico, the country exports only 8% of the avocados it produces. This may account for the fact that Mexicans consume a whopping 22 pounds of avocados per capita each year, as opposed to 2 pounds in the United States. (Avocado consumption north of the border, although not nearly as high as in Mexico, has doubled since the 1970’s, when “alligator pears” were still considered exotic fare in many locales.) Nearly every meal in Mexico is accompanied by the avocado in some form, whether it be a guacamole garnish for taquitos, an avocado salsa for street tacos, or sliced avocados with just about anything else.

So widespread is the presence of avocado at the table that it may very well be compared to the butter that often accompanies European meals. Unlike butter, however, avocados are low in saturated fat, containing less than one gram per slice as opposed to butter’s 15 grams per pat. They also contain 60% more potassium than bananas, as well as significant amounts of riboflavin and vitamins C, E and B6. Since they contain no sodium or cholesterol, it might be worth considering spreading a slice of avocado, rather than butter, on that morning toast or English muffin.

Known in Mexico as aguacate, a name derived from the Nahuatl ahuacatl, meaning testicle (presumably because of the fruit’s shape, although the Aztecs are said to have considered it to be an aphrodisiac) the name palta is more frequently used in other Spanish speaking countries.

Popular in nearly all parts of the Hispanic world, the avocado is probably put to the widest culinary use in Mexico, where the leaves are used to flavor barbacoa and mixiotes, traditional meat dishes, and the famous Oaxacan black beans. The Mexican avocado, unlike the other two species, Guatemalan and West Indian, has leaves with a distinctive anise scent, and one of the varieties found in Mexico, the criollo, is eaten with its thin, purple-black skin. (The skin of most other varieties, however, is thick and somewhat bitter.) In Mexico, shoppers who appreciate the rich flavor and heady scent of these small beauties eagerly await criollo avocado season.

Avocados, unless locally grown and sold, are shipped hard and unripe to markets and stores. Like bananas, they are sometimes pre-ripened with ethylene to encourage sales. They should never be pinched with the fingers to test for ripeness, since this leaves bruises, but rather pressed gently in the palm of the hand. Ripe avocados will yield to gentle pressure while still maintaining an overall firmness. Buying a few days ahead and storing at room temperature in a plastic bag is recommended to ripen hard avocados at home. Once cut, they may be kept in the refrigerator for a few days, sprinkled with lime juice and stored in an airtight plastic container. To use processed products, such as the frozen avocado paste exported from Uruapan, Michoacan, follow directions given on the container.

The following collection of avocado recipes, some from previous columns, only hints at the myriad culinary possibilities offered by the avocado. Whether used in a refreshing cold soup, a mixed fruit salsa, or even an avocado milkshake, the avocado somehow seems to impart the sunny flavor of its native land.

(To the rest of the Kitchen!) 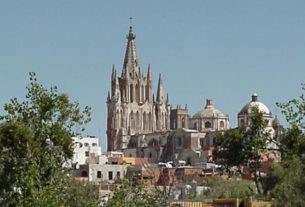