Every great fisherman has a story about the “one that got away.” A memorable “get away” to Mexico will hook more than a few fish tales with some of the best fishing in the world.

In Los Cabos, a 10 pound fish is considered a minnow and a 200 pounder is a light weight for many species. The area holds numerous world records.

The warm waters of the Sea of Cortes meet the cold waters of the Pacific at the southern tip of the Baja Peninsula to create some of the most fertile waters in the world. More than 850 species of fish are found in these waters and something is in season year-round. More than 40,000 marlin and sailfish are caught each year, with nearly all being released.

Blue and black marlin season is June through December and sailfish season is April to October. Striped marlin are abundant year-round. Several international tournaments are held each fall.

Fishing boats leave in the early dawn, promising record catches in the waters of “Marlin Alley”. Most hotels have their own fleets just outside the door, or can arrange a charter for guests. A full day trip includes equipment and a guide.

Every May through November, this Pacific port 70 miles south of Tijuana becomes the yellowtail capital of the world. Sea bass, barracuda, swordfish, bonito, albacore and halibut are among the other great catches to hook in Ensenada.

About 300 miles northwest of La Paz, on the brackish estuary of the Rosalia River, is the village that is home of the black snook, a prized game fish that measures up to six feet in length and weighs up to 80 pounds. Clam digging and lobster diving are also popular in the area.

The Pacific Coast and the Gulf of California Mazatlan

Mazatlan, the “Billfish Capital of the World”, is located on the western coast of Mexico along the Pacific Ocean. Fishing is year-round, with striped marlin in abundance from December through April and sailfish from May through November. Tuna, sea bass, dorado and grouper are also plentiful.

There are more than 75 fishing boats that take fishermen out to try their luck. Generally, trips include bait, tackle and crew. All fishing charters depart from the fishing marina. Most fishermen in Mazatlan fish for sport with “catch and release” the common practice.

In Acapulco, catches include sailfish, marlin and dorado. Most hotels have their own charters that leave from the downtown dock across from the zócalo (town square). There is also excellent fresh-water fishing at Coyuca Lagoon.

Puerto Vallarta is bordered by rich fishing waters and is an outstanding departure point for deep-sea expeditions. Catches include sailfish, marlin, tuna, bonito, red snapper and shark. The season is year-round, with many fishing companies headquartered at the northern end of the city’s main street, the malecón. One of Puerto Vallarta’s prime spots for freshwater fishermen is the Cajon de Penadam.

Zihuatanejo, Ixtapa’s neighbor, is a classic Mexican pueblo tucked around one of Mexico’s most beautiful bays. Sportsmen have been coming here for decades to fish for marlin, sailfish, dorado, yellow fin tuna, roosterfish and wahoo. Boats range in size from 24-foot pangas to 38-foot sport fishers. “Catch and release” is encouraged.

Located just 250 miles south of the Nogales/Arizona border, San Carlos offers a wide variety of game fish in the Sea of Cortes.

Although summer offers the most spectacular fishing, the big runs of marlin and sailfish come in the spring between April and June, and there is great game fishing in the winter months as well.

The Gulf of Mexico and the Caribbean Coast Cancun

Cancun offers good deep-sea fishing and lagoon fishing. Sailfish and dolphin fish run march through May. Blue and white marlin and bluefin tuna in April and May. Trips leave from several marinas.

This river port city, 375 miles south of Matamoros and the Brownsville, Texas border crossing, is known to sportsmen around the world. Snook and Yellowtail thrive in the rivers and lagoons, while sailfish, marlin, snook, mackerel, red snapper, bonito, pompano and yellowtail fill the Gulf of Mexico.

This article originally appeared in “Mexico Living and Travel Update”, Winter 1994/95, and is presented here with their kind permission. 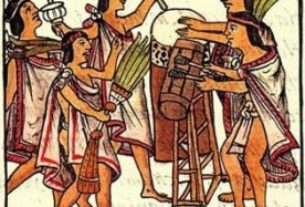