The world’s largest natural crystals (of selenite, said to enhance sex drive) have been discovered in caverns in Chihuahua.

Early in 2001, news emerged of a truly extraordinary discovery in caverns deep under the earth in the state of Chihuahua. Miners tunneling through the Naica Hills, south of Chihuahua City, in search of silver and zinc, found huge mineral crystals, far larger than any natural crystals previously seen anywhere else on the planet.

The monster crystals, over six meters long, are made of selenite, a crystalline form of the mineral gypsum (the number one ingredient in blackboard chalk!). For its pale translucence, this form of gypsum is known as selenite, named after Selene, the Greek goddess of the moon.

The Naica (“shady place”) hills have been actively mined for more than a century. Even though early prospectors discovered silver here in 1794, the first formal mining claim was not made until a century later in 1896, by one Santiago Stoppelli, and large scale mining only began in 1900.

Ten years later, super-large sword-shaped crystals of selenite were found in a cavern at a depth of 120 meters. Over the years, a steady stream of geologists and mineral collectors have visited this 70-meter-diameter cave, since renamed the Cave of the Swords, which is now equipped with paths, lights and a ventilation system. Even with this system, the temperature in the cave is a stifling 40 degrees C! Several typical examples of selenite crystals from this cave, ranging in length from 1.2 to 1.6 meters (4 to 4.25 feet), are displayed in the Smithsonian’s National Museum of Natural History.

But these specimens from the Cave of the Swords are small fry in size when compared with the latest discoveries, 300 meters below the surface, in the Cave of the Crystals. In two relatively small chambers, each the size of a small apartment, miners found incredibly large selenite crystals, some over six meters long. The crystals combine to form massive fifteen-meter-long columns, “the size of pine trees”, as well as hundreds of formations shaped like sharks’ teeth, jutting about a meter up from the cave floor. The overall effect is, in the words of Richard Fisher, an Arizona-based photographer and adventurer, like walking into an enormous geode.

Mining operations at Naica have been in the hands of the Peñoles group since 1961 and the mine, one of the most productive in Chihuahua, still produces ample quantities of lead, silver and zinc. Even if the silver ore is eventually worked out, Peñoles realizes that the caverns might have a very bright future as a major geo-tourist attraction. The company has not only taken steps to safeguard the crystals, but is already developing a tourism plan. This will inevitably involve the installation of an air-conditioning system in the caverns, since the temperature in the Cave of Crystals is a mind-boggling 60 degrees C. This heat, combined with the 100% humidity in the caverns, is so suffocating and disorienting that researchers can only safely spend a few minutes at a time studying this fantastic sight.

The harsh conditions have not deterred crystal looters who are already reported to be breaking through padlocked doors and trying to chisel prize specimens off the cave walls. This is a dangerous business and the effort proved fatal for one would-be collector when the gigantic crystal he was attempted to sever broke away from the ceiling and crushed him as it fell. The combined physical forces of Newton and Darwin caused this particular plunderer to meet his maker!

It will be several years before the mine can be safely opened to tourists, but while Peñoles makes its preparations, other miners in the region no doubt dream that they might be lucky enough to find even bigger crystals nearby!

The Geology of the Crystals

The Naica Hills are comprised of 97 million year old (Early Cretaceous) limestones. Pressure from a chamber of magma (superheated molten rock), located deep underground, forced mineral-rich fluids upwards into cracks in the limestone. Over time, deposition from these fluids filled the cracks with sulfide-rich ores of metals such as gold, silver, lead and zinc.

So, precisely how did these crystals form? No one is yet 100% sure but there are two main theories.

The first is that the selenite crystals began to grow in pre-existing steam-filled caverns as a direct result of the same hydrothermal fluids that formed the ore deposits. This would mean that the age of the crystals would be similar to the age of the ores, but it would also suggest that we might find metallic ores contaminating the formations in the caverns, which, to the best of my knowledge, we don’t!

The second possibility is that, after the mountains and ores had been formed, rainwater percolating through the rocks dissolved some of the sulfide ores, producing sulfuric acid. This acid then reacted with some of the limestone (calcium carbonate), producing gypsum (calcium sulfate). This gypsum was still in solution, but was later precipitated out of solution as these astonishing selenite (hydrated calcium sulfate) crystals when the water containing it seeped into caverns.

Either way, does it really matter? The important thing is that these amazing crystals have been discovered and that they should soon be added to the incredible list of natural wonders that can be enjoyed in Mexico!

Jan 2009 – Update, in note form, based on the Discovery Channel documentary “Naica: Secrets of The Crystal Cave” (2008).

The largest crystals are over 11 meters long, and weigh more than 55 tons. Scientists believe they have found DNA from ancient bacterial life trapped in air bubbles inside the crystals.

The crystals formed when the caverns were completely filled with hot water (warmer than 50 degrees C) supersaturated with calcium sulphate (gypsum) for very long periods of time. The estimated growth rate, confirmed by uranium-thorium dating, is 1.5 mm per 1000 years, which means that the longest crystals took more than 500,000 years to form.

The engineer working for Peñoles in charge of these mines believes that many more caves could be found, but stresses that they would never have been located if it was not for the company&rsquo;s massive pumps (pumping more than 16,000 gallons of water out each minute) working round the clock for years. This pumping has lowered the water table from 100 meters below the surface to about 300 meters in the area of the mines. Since the caverns were drained, the crystals are no longer growing, and the temperatures in the cavern have fallen about 0.5 degrees C each year.

Personal opinion: Sustainable tourism may be impossible in these caverns and, to preserve these magnificent crystals for future generations, the decision may have to be taken to reflood the caverns, protecting the crystals that already exist and allowing new ones to grow. 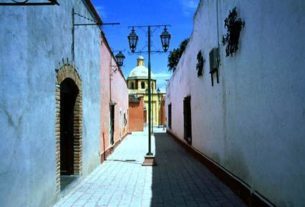